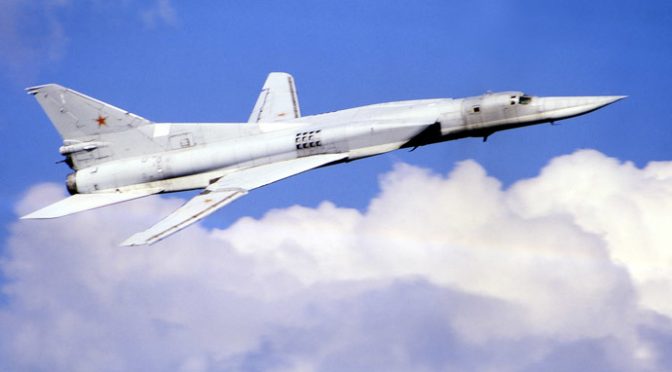 According to the Investigative Committee, Scales’s statement also violated article 20 of the United Nations’ International Covenant on Civil and Political Rights, which bans any propaganda of war and instigation of discrimination, hatred or violence.

China, for its part, is continuing its graduated dumping of US treasuries for the fifth month in a row.

Russia’s Air Force is deploying an unspecified number of strategic nuclear-capable supersonic bombers to Crimea, according to a source. The major drills also include deployment of tactical Iskander ballistic missiles to the Kaliningrad exclave in Europe.
Several Tu-22M3 (NATO designation ‘Backfire’) variable-sweep wing, long-range strategic and maritime strike rocket aircraft are due to arrive to Crimea as part of global training exercises for the Russian military in the European part of the country.
READ MORE: Massive surprise drills launched in Arctic on Putin’s orders (VIDEO)
“In the course of snap combat readiness drills of the armed forces strategic rocket Tu-22M3 aircraft are going to be deployed to Crimea,” a source in Defense Ministry told TASS.

Armed with a variety of air-to-sea cruise and ballistic missiles, high-precision bombs, the bomber’s specialization is the elimination of valuable seaborne targets, such as aircraft carriers and their escorts, convoys and operational squadrons.

A squadron of 22 Tu-22M3 supersonic bombers was operating from Veseloe Airfield in the central Crimean Peninsula from 1985, but with the fall of the Soviet Union the base was abandoned.

Russia’s Central Command is also beefing up its presence in Kaliningrad. The task force in Kaliningrad Region is set to be bolstered with Iskander-M tactical ballistic missile complexes and additional fighter jets and bombers.
“The task force in the Baltic region will be enhanced with Iskander missile complexes of the Western military district, the delivery of complexes is going to be carried out by large landing ships of the Baltic Fleet,” said the source.
READ MORE: Russian military completes rapid-deployment drills in Kaliningrad
The Iskander-M (NATO designation name SS-26 Stone) is a highly mobile system with exceptional operational readiness.
The system is capable of hitting targets at a distance of up to 400km to a precision of around 30cm. It can strike an adversary’s troops or underground command centers, depending on the warheads placed on the rockets. If necessary, its missiles can also be armed with nuclear warheads.
READ MORE: Live tactical missile firing touted by Russia’s Western Command


Thousands of Russian troops were put on alert Monday morning after President Putin ordered a surprise large-scale military drill to test the armed forces’ readiness to counter challenges in the north and particularly in the Arctic. The combat readiness drills will last till March 21.
The war games are engaging up to 38,000 troops, 3,360 weapon units and vehicles, 110 aircraft and 55 battleships, support ships and submarines. The major task is to assess capability of the armed forces to ensure military security in the Arctic and Baltic regions.
“New military challenges and threats demand further boost of the military capabilities of armed forces and special attention is being paid to the condition of the newly-set-up strategic command in the north,” Defense Minister Sergey Shoigu told journalists on Monday.

China, the largest holder of US debt, has continued to cut back on US Treasuries for the fifth consecutive month, shaving $5.2 billion from its holdings between December and January. Japan is edging closer in overtaking the number one spot.
The US Treasury reported Monday that China reduced its holding from $1.244 trillion in December to $1.239 trillion in January. The fifth straight month of reductions.
Economic growth in China, which is at a 25-year low, is the most obvious explanation for the scale back. With more capital leaving mainland China, the less the government needs US dollars to keep the yuan in check.
In total, foreign central banks sold off $12.3 billion in US Treasuries in January, the fourth consecutive month of outflow.
Despite China’s pull out, overall foreign holdings increased one percent to $6.22 trillion, or just over 34 percent of total public debt. Among all foreign creditors, China and Japan own about 40 percent of US Treasuries. Japan, the second biggest US debt owner, upped its holdings by $7.7 billion to $1.2386 trillion. Now Japan is neck-and-neck with China as the largest foreign holder of US Treasuries. HSBC Holdings forecast Japanese investors may buy up $300 billion in US Treasuries in the next two or three years.
As the Japanese yen continues to weaken under the Bank of Japan’s monetary stimulus, the demand for dollar-held assets is increasing.
READ MORE: US blows through $18trn debt limit
“Japan should be on the path, from a Treasury perspective, to becoming a much bigger holder just because of what’s going on in their market and because they’re the kinds of investors that would invest across different markets,” Aaron Kohli, an interest-rate strategist at BNP Paribas in New York, told Bloomberg News.
Belgium, the third largest owner after China and Japan, increased its share to $354.6 billion, a $19.6 billion increase since December.
US debt is becoming a safer more attractive option compared to Europe, where near-zero interest rates and stimulus plans threaten to stifle bond yields.
While Europe pursues a loose monetary policy, the US is getting ready to tighten with an expected interest rate rise this year.
One of the sources of funds for the Cabal is Big Pharma. It also serves as the weapon of mass destruction via vaccine tainted with live virus it is supposed to protect us from, and the deadly chemicals used to treat our diseases that they caused through our GMO / pesticide contaminated food supply.
We can avoid using drugs, defeat any viral attack and scaremongering easily by knowing how to build our own comprehensive antiviral system. Find more about it here.