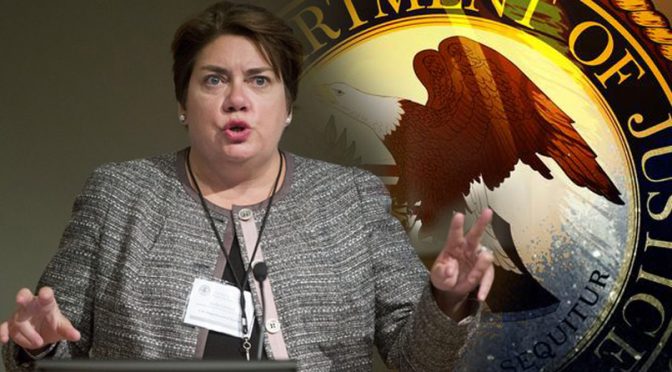 Something stunning took place earlier this week, and it quietly snuck by, unnoticed by anyone as the “all important” FOMC meeting was looming. That something could have been taken straight out of the playbook of either Cyprus, or Greece, or the USSR “evil empire”, or all three.

This is how the WSJ explained it:
The U.S. Justice Department’s criminal head said banks may need to go beyond filing suspicious activity reports when they encounter a risky customer.
“The vast majority of financial institutions file suspicious activity reports when they suspect that an account is connected to nefarious activity,” said assistant attorney general Leslie Caldwell in a Monday speech, according to prepared remarks. “But, in appropriate cases, we encourage those institutions to consider whether to take more action: specifically, to alert law enforcement authorities about the problem.”
The remarks indicate that banks may be expected to do more than just file SARs, a responsibility that itself can be expensive and time-consuming.
Some banks already have close relationships with law enforcement, said Kevin Rosenberg, chair of Goldberg Lowenstein & Weatherwax LLP’s government investigation and white collar litigation group. Ms. Caldwell’s remarks “speak to moving forward in a more collaborative way,” said Mr. Rosenberg.
A tip-off from a bank about a suspicious customer could lead law enforcement to seize funds or start an investigation, Ms. Caldwell said.
What does this mean, and why is it so critical? Simon Black of International Man explains:
* * *
Justice Department rolls out an early form of capital controls in America
Imagine going to the bank to withdraw some cash.
Having some cash on hand is always a prudent strategy, and especially today when more and more bank deposits are creeping into negative territory, meaning that you have to pay the banks for the privilege that they gamble with your money.
You tell the teller that you’d like to withdraw $5,000 from your account. She hesitates nervously and wants to know why.
You try to politely let her know that that’s none of the bank’s business as it’s your money.
The teller disappears for a few minutes, leaving you waiting.
When she returns she tells you that you can collect your money in a few days as they don’t have it on hand at the moment.
Slightly irritated because of the inconvenience, you head home.
But as you pull into your driveway later there’s an unexpected surprise waiting for you: two police officers would like to have a word with you about your intended withdrawal earlier…
If this sounds far-fetched, think again. Because it could very well become a reality in the Land of the Free if the Justice Department gets its way.
Earlier this week, a senior official from the Justice Department spoke to a group of bankers about the need for them to rat out their customers to the police.
What a lot of people don’t realize is that banks are already unpaid government spies.
Federal regulations in the Land of the Free REQUIRE banks to file ‘suspicious activity reports’ or SARs on their customers. And it’s not optional.
Banks have minimum quotas of SARs they need to fill out and submit to the federal government.
If they don’t file enough SARs, they can be fined. They can lose their banking charter. And yes, bank executives and directors can even be imprisoned for noncompliance.
This is the nature of the financial system in the Land of the Free.
And chances are, your banker has filled one out on you—they submitted 1.6 MILLION SARs in 2013 alone.
But now the Justice Department is saying that SARs aren’t enough.
Now, whenever banks suspect something ‘suspicious’ is going on, they want them to pick up the phone and call the cops:
“[W]e encourage those institutions to consider whether to take more action: specifically, to alert law enforcement authorities about the problem, who may be able to seize the funds, initiate an investigation, or take other proactive steps.”
So what exactly constitutes ‘suspicious activity’? Basically anything.
According to the handbook for the Federal Financial Institution Examination Council, banks are required to file a SAR with respect to:
“Transactions conducted or attempted by, at, or through the bank (or an affiliate) and aggregating $5,000 or more…”
It’s utterly obscene. According to the Justice Department, going to the bank and withdrawing $5,000 should potentially prompt a banker to rat you out to the police.
This may be a very early form of capital controls in the Land of the Free. This is the subject of today’s Podcast. You can listen in here.
source »

One thought on “An Early Form Of Capital Controls In America”