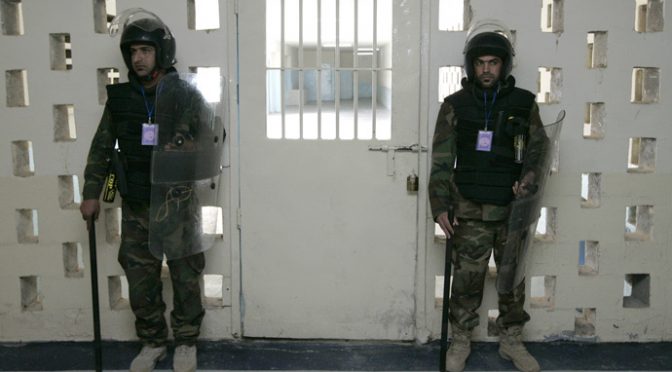 After the CIA’s declassification of the document used to justify the Iraq invasion, it’s the NY court’s turn to order the release of Cabal implicating materials from Abu Ghraib prison.

Published time: March 21, 2015 11:32
A New York-based federal judge has ordered the release of around 2,000 images showing the cruel treatment of detainees by the US military, despite White House efforts to circumvent the Freedom of Information Act.
Judge Alvin K. Hellerstein of the US District Court in Manhattan handed the American Civil Liberties Union a major victory on Friday when he ruled that the US government must release photographs depicting the abuse of prisoners in US custody at military sites around the world, including the notorious Abu Ghraib facility in Iraq.
The order would not take effect for 60 days to allow the Pentagon an opportunity to appeal the decision.
The White House had sought to keep the photographs under wraps after US Congress passed a law in 2005 that any further public disclosures of the disturbing images would “endanger American soldiers.” The ACLU, however, filed a lawsuit in 2004 for the release of the photos, arguing they are “crucial to the public record.”
“They’re the best evidence of what took place in the military’s detention centers, and their disclosure would help the public better understand the implications of some of the Bush administration’s policies,” ACLU deputy legal director Jameel Jaffer said in a news release. “The Obama administration’s rationale for suppressing the photos is both illegitimate and dangerous.”

The Department of Defense has not yet responded to requests for comments, Reuters reported.
Last August, Hellerstein gave the government an extension to prove that the lives of military personnel would be threatened by the release of the photographs. Despite the rise of a number of new challenges facing the US military, including the battle against the Islamic State (IS, formerly ISIS/ISIL), the judge apparently saw no reason to prevent the photos from reaching the public realm.
At that time, Hellerstein, who was privy to many of the images, said some were “relatively innocuous while others need more serious consideration.”
The court had been seeking from US military officials an individual analysis on each photograph as to why it should be blocked from the mandates of the Freedom of Information Act (FOIA). Instead, the Pentagon in 2009 and 2012 provided a single certification to block the photos from release.
“The Government’s refusal to individual certifications means that the 2012 Certification remains invalid and therefore cannot exempt the Government from responding to Plaintiffs FOIA requests,” the judge wrote in his court order on Friday.
Hellerstein said it appeared the government was looking to seriously delay the process thereby “tending to defeat FOIA’s purpose of prompt disclosure.”
In 2009, former Senator Joe Lieberman said there were nearly 2,100 photographs in the government’s possession that had not seen the light of day. In the event the photos are finally released, the identities of any individuals would be redacted, the court document said.
READ MORE: Feds’ fight to withhold CIA torture photos may soon end
The photographs first received attention in late 2003 by Amnesty International, which provided shocking proof that members of the US Army and the Central Intelligence Agency carried out so-called ‘enhanced interrogation techniques’ against detainees in the Abu Ghraib prison in Iraq.
The photographs pointed to gross physical and sexual abuse, including torture, rape and murder. The report opened up a debate in the United States as to the definition of torture and if it is applicable in a time of war.
The Bush administration argued that international humanitarian laws, such as the Geneva Conventions, did not apply to US interrogators overseas. Later US Supreme Court decisions overturned Bush administration policy, ruling that international law applies to American soldiers overseas.
Nevertheless, President Obama has still not closed down the Guantanamo Bay detention facility where over 100 detainees – many of them innocent of their charges – continue to languish without appropriate legal representation amid hostile conditions.
source »
One of the sources of funds for the Cabal is Big Pharma. It also serves as the weapon of mass destruction via vaccine tainted with live virus it is supposed to protect us from, and the deadly chemicals used to treat our diseases that they caused through our GMO / pesticide contaminated food supply.
We can avoid using drugs, defeat any viral attack and scaremongering easily by knowing how to build our own comprehensive antiviral system. Find more about it here.