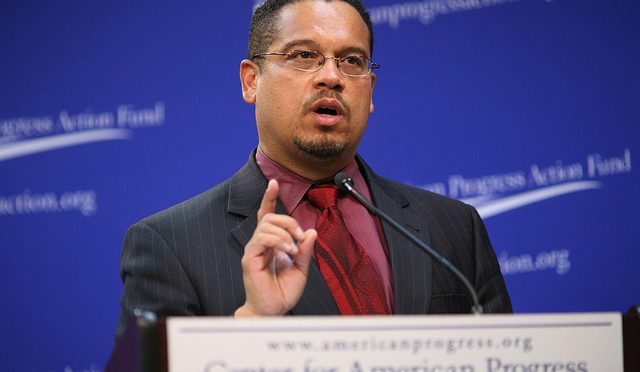 March 19, 2015 (EIRNS)— The co-chair of the Congressional Progressive Caucus, Rep. Keith Ellison (D-Minn.) was asked yesterday by Alicia Cerretani of LaRouche PAC whether he would support the United States joining the Asian Infrastructure Investment Bank (AIIB), and taking up Chinese President Xi Jinping’s offer for the U.S. to collaborate with China on this initiative. Ellison, who was speaking to a Capitol Hill luncheon sponsored by the Progressive Democrats of America, stated that it is a great idea and, that he agrees “wholeheartedly.”

Much of Ellison’s speech had been devoted to denouncing the campaign to grant the White House fast track authority in the secret negotiations underway for the Trans-Pacific Partnership (TPP), part of the Obama Administration’s so-called Asia Pivot, and a deal which Ellison called “a race to the bottom” and a “job-killer for the American economy.” In her question, Cerretani counterposed the efforts by the Obama administration to contain China through the TPP and its attempted boycott of the AIIB, to the surprise announcement by four leading European nations—Great Britain, France, Germany, and Italy—that they were defying the Obama position and joining the AIIB as founding members. Cerretani stressed that, taken together with the BRICS New Development Bank, this initiative is shaping a new international economic order, and that the Congressional Progressive Caucus should throw its efforts into causing the United States to reverse its position and become a part of this. She added that American workers have common cause with the people of the BRICS nations in standing up to the reigning international financial interests and creating a new system based on investment in growth and productivity.
In his response, in which he stated that he agreed that the Progressive Caucus should support U.S. participation in the Asian Infrastructure Investment Bank, stating “We’ll take that up,” Rep. Ellison also noted that the progressive wing of the Democratic Party has long advocated the creation of an Infrastructure Bank inside the United States. But, while nothing has been done to adopt that policy domestically, now you see much of the rest of the world moving in that direction with their support for the Asian Infrastructure Investment Bank and related initiatives, he said. Ellison then remarked, “We think it’s the right thing to do!”
A video of the event can be viewed at: https://youtu.be/YHdwpOF9KDc?t=35m28s

Get On the AIIB Boat Before It Sails, Xinhua Says

March 20, 2015 (EIRNS)—As Luxemburg is the latest country to sign on to the AIIB, a series of editorials in the Chinese press is urging countries to get on board before the boat sails on March 31, the deadline for becoming a founding member.
“The development of the AIIB and Asian economy is an irresistible trend in current situation,” says Xinhua.
“Therefore, it is advisable for Western countries to take advantage of the opportunity to promote self-development and to jointly usher in a new era of world development,”
writes Xinhua.
“Better late than never. It is high time for those who are still hovering outside the new-born international financial body to get on the boat, so that they could share their valuable experience and make joint contributions to Asia’s economic growth and to the sustainable development of world economy at large.”
“As the future of the world’s economy will be centered in Asia, huge potential in its infrastructure construction will bring tremendous business opportunities to the world,”
the editorial continues.
“By joining the bank, the countries have actually booked their shares in Asia’s booming investment. According to statistics, by 2020 around 8 trillion dollars of investment will be needed in the fast-growing Asia-Pacific region to improve its infrastructure. However, it is obvious that the World Bank and the Asian Development Bank (ADB) could not comfortably cover the shortfall.”
Global Times notes that the founding of the AIIB will also be valuable in Chinas continuing “reform and opening up”. “The establishment and operation of the AIIB will inevitably lead China to become more open to the world. The AIIB is an opportunity for China to raise its international financing capability and will push China to integrate more with the world. China, as the AIIB’s initiator and site of its headquarters, will support it through a spectrum of self-improvement measures. The whole of Chinese society should participate in this process,” Global Times writes.
“China joined the World Trade Organization in 2001 and analysts have been applauding its positive impact on China’s reform and opening-up,”
the editorial continues.
“China’s establishment of the AIIB may not have a wide implication for Chinese society, but it will make high demands of China’s comprehensive abilities. If the AIIB can be a widely acclaimed international financial organization under China’s lead, the AIIB will be respected and China will become a true world power.”
It is expected that and implementation plan for the Belt and Road projects will be revealed next week when President Xi Jinping addresses the 2015 Boao Forum for Asia.
EIR