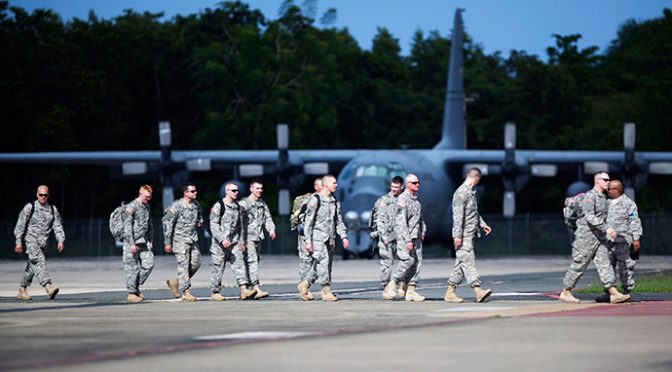 Since calling Venezuela as a threat to the United States, more diplomatic and military repercussions are emerging.

Published time: April 01, 2015 07:2
Latin American countries should discuss removing all US military bases from their soil, a top official of integration organization UNASUR suggested. The issue may be discussed next month at the upcoming Summit of the Americas in Panama.
The Summit of the Americas on April 10 and 11 is to be attended by regional leaders, with 31 nations already confirming attendance. UNASUR Secretary-General Ernesto Samper suggested that the summit would be a good place to “reassess relations between the US and South America.”
“A good point on the new agenda of relations [in Latin America] would be the elimination of US military bases,” the former Columbian president told the news agency EFE.
He added that the bases were “a leftover from the days of the Cold War and other clashes.”
READ MORE: 5mn Venezuelans sign petition against US aggression & interference
Samper also blasted Washington’s habit of taking unilateral steps to pursue its goals in Latin America. The latest example is the US declaration of Venezuela as a threat to its national security, he said.
“In a globalized world like the present one, you can’t ask for global rules for the economy and maintain unilateral rules for politics. No country has the right to judge the conduct of another and even less to impose sanctions and penalties on their own,” he stressed.


The Panama meeting has already been declared historic as it will be the first one attended by Cuba since 1962, when it was expelled from the Organization of American States (OAS), the event’s organizing body. In 2014, the US and Canada blocked the proposal to readmit Cuba, which drew criticism from UNASUR and a boycott of last year’s summit of the Americas by Ecuador and Nicaragua.
This year Cuban President Raul Castro will have an opportunity to meet his US counterpart Barack Obama, marking progress in the restoration of US-Cuban relations after decades of alienation.
Samper said that the Cuban-US rapprochement should not overshadow Washington’s conflict with Caracas, which is also sending a delegation to the Panama summit, the continued operation of the prison at Guantanamo Bay, US militarization of the continent and other issues.
The Union of South American Nations (UNASUR) is a regional integration organization that includes 12 members and two observer nations. It was formally founded in 2004 and became fully functional in 2011, when its Constitutive Treaty entered into force following ratification by member states. UNASUR is headed by a president chosen from heads of member states, but the secretary-general performs the bulk of the organizational work.
source »
One of the significant sources of funds for the Cabal is the healthcare industry which registered a whopping $2.7 trillion in 2011, and is projected to soar to $3.6 trillion in 2016, in the US alone. We believe that this is just a conservative figure.