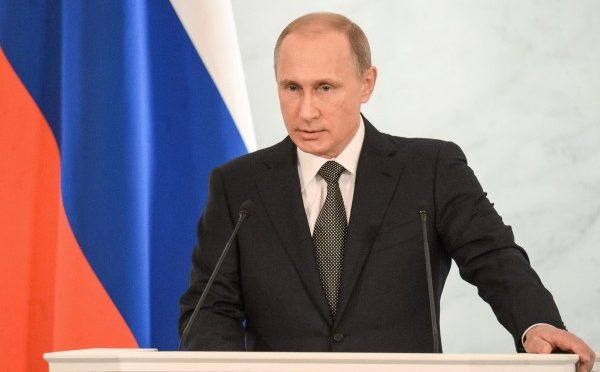 Russian President Vladimir Putin has said that the BRICS bloc of nations – Brazil, Russia, India, China, and South Africa – have already proved their effectiveness on the world stage despite being a relatively “young” organization.

“BRICS are coordinating their policies on key international issues ever more closely, and are playing an active part in shaping a multi-polar world order and developing modern models for the world’s financial and trading systems,” Putin said on April 1, the day Russia assumed the presidency of the organization.
Brazil, Russia, India and China began working on establishing the bloc in 2006 but it wasn’t until the first BRIC summit in Yekaterinburg, Russia that the organization began to show promise of being a global player.
South Africa joined the group in 2010.
This year’s summit will be hosted in the city of Ufa, Russia July 8-9.
Putin said that the summit coincides with the 70th anniversary of Russia’s defeat of Nazi Germany and 70 years since the end of World War II.
“Aware of the past’s tragic lessons, the BRICS countries consistently support peaceful settlement of international conflicts and condemn any attempts to use force and pressure or intervene in sovereign countries’ internal affairs,” the Russian president said.
But Putin said that in addition to strengthening global security and stability BRICS would focus on the group’s Strategic Economic Partnership and will facilitate the launch of the New Development Bank and the Currency Reserve Pool.
The BRICS Bank launched last year during the 6th BRICS Summit in Brazil will fund infrastructure projects in Brazil, Russia, India, China and South Africa, and challenge the dominance of the Western-led World Bank and the IMF.
The Agreement will enter into force and the Bank will begin operations only after all member countries deposit their instruments of ratification with Brazil.
Central Banks of the member countries will also have to finalize an Inter-Central Bank Agreement containing the operational details of swap transactions and the Standing Committee’s Operational Procedures (SCOP) before the arrangement can be operational.
Putin added that Russia’s presidency will also focus on education, culture, science and healthcare.
“During Russia’s presidency, the BRICS Youth Summit and the Global Universities Summit will take place and we will establish the BRICS Network University,” Putin said.
“We will examine opportunities for developing inter-parliamentary dialogue, through which lawmakers could take direct part in resolving the tasks before the BRICS group,” he added.
Youth employment
Last year, a special edition of Policy in Focus, a United Nations Development Programme report released in April, is urging BRICS countries to focus on generating employment opportunities for youth as a means of meeting development projections.
Youth and Employment in the BRICS, written by regional experts, is dedicated to the analysis of how social programmes in Brazil, Russia, India, China and South Africa promote youth employment.
This is particularly poignant when considering that UN statistics hold that the world is witnessing the greatest number of youths in human history: In 2014, there are more than 1.2 billion people between the ages of 15 and 24.
Finding employment for such an unprecedented number of young people is a global challenge, the UN says, and developing countries especially should factor these demographics into future planning about job creation mechanisms.
Programmes to create jobs for young people in the BRICS countries fall into three broad categories: workfare; technical or professional training, and access to credit to promote self-employment and entrepreneurship.
The BRICS Post
One of the significant sources of funds for the Cabal is the healthcare industry which registered a whopping $2.7 trillion in 2011, and is projected to soar to $3.6 trillion in 2016, in the US alone. We believe that this is just a conservative figure.

We are updating our DNS to www.geopolitics.co to make it more descriptive to our discussions here. Our old www.eclinik.co is now pointing to our healthcare site.