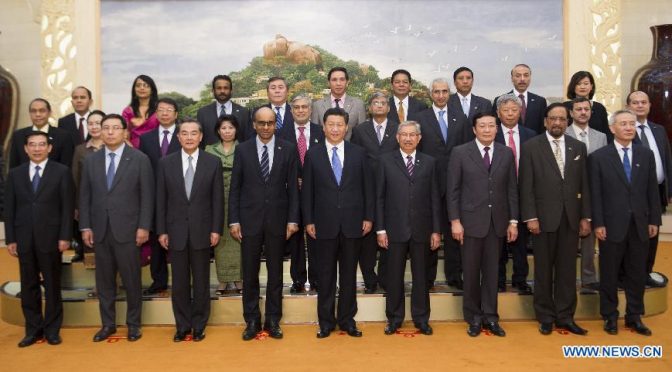 Poland intends to join the AIIB. Ukraine is considering joining the AIIB. The United States , Japan, and Canada has no immediate intention to participate.[25] 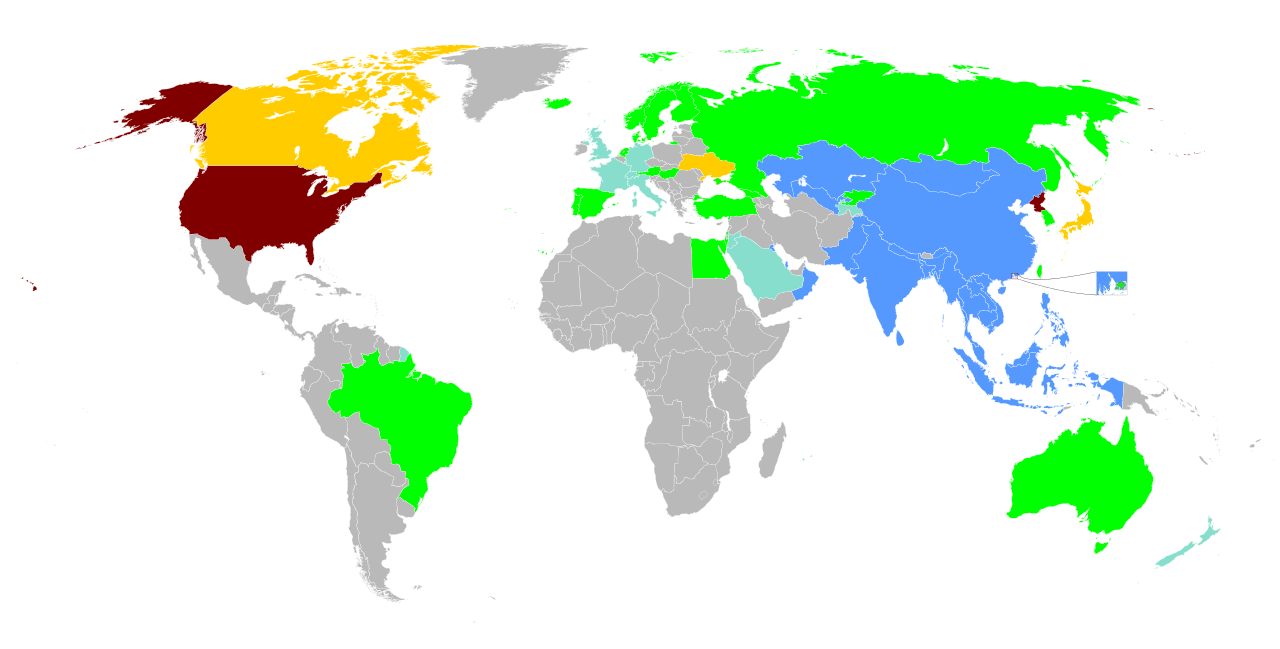 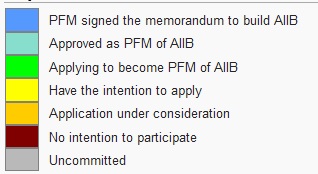 Stampede to Join China’s Development Bank Stuns Even Its Founder

Few in Beijing had believed that Taiwan, still considered a breakaway territory by China, would want in. Same for Norway, whose relations with the Chinese have been chilly since its decision five years ago to award the Nobel Peace Prize to a dissident Chinese writer.
But after the deadline, China announced that it had attracted 46 founding members for its Asian Infrastructure Investment Bank. Among the surprises: While China had expected to be joined by its neighbors, the final tally of countries looking to participate included 14 advanced economies of the Group of 20, many of them, like Brazil, France and Germany, from outside Asia.
“Such wide and warm support was unexpected,” said Jin Canrong, professor of international studies at Renmin University in Beijing.
The last-minute surge to join the bank was considered a major victory for China in a rare public showdown with the United States, which opposed the bank, as the two powers try to outmaneuver each other for influence in Asia. It was also a recognition of economic reality. China has deep pockets, and the institutions backed by the United States have not met the growing demands for roads, railroads and pipelines in Asia.
American officials seem to see the new institution as an effort to undercut the World Bank and the Asian Development Bank, international financial institutions dominated by the United States and Japan. Obama administration officials have also expressed concern that the new bank, under China’s leadership, would ignore lending protections created to ensure, for instance, that vulnerable populations are not pushed from their land in the rush for development.
By this week, Japan, China’s chief rival in Asia, was the only major Asian ally still standing with the Obama administration, while usually staunch allies like South Korea and Australia had pledged to join, reversing earlier decisions.
The avalanche of countries wanting to join was set off in recent weeks by Britain, one of the United States’ most trusted friends, which concluded that China was such a large export and investment market that it could not afford to stay on the sidelines of one of that country’s pet projects.
That the United States’ allies in Europe and Asia flouted Washington’s appeals not to join the bank has brought a sense of triumph to Chinese officials and scholars who say that China has now demonstrated it can construct a broad-based institution without the United States in the lead.
“This has shown China that you don’t always have to work your way with the United States, that you can work your way with the region and many others outside the region,” said Wu Xinbo, the director of the American Studies Center at Fudan University in Shanghai. “As long as people think what you are doing is beneficial and that you are providing for the public good, you don’t need U.S. approval.”
Washington basically undermined itself by failing to allow a bigger voice for China in the World Bank and the International Monetary Fund, said David Daokui Li, a former adviser to the People’s Bank of China who has a Ph.D. in economics from Harvard.
“The Americans got nervous, saying to its allies, ‘You guys can’t join, they are not dependable,’ ” Mr. Li said. “But in the end, all of America’s best allies ended up joining. We should be the ones most surprised, not the Americans.”
Washington had warned some major allies not to join. And President Obama took a hard-line stance against China’s attempts to exert power in the region in his State of the Union address this year, said Bonnie Glaser, senior Asia adviser at the Center for Strategic and International Studies in Washington.
“He said China should not be able to write the rules — the United States should write the rules,” Ms. Glaser said.
Now that the United States has lost the battle, it has softened its position, saying that it will encourage the World Bank and the Asian Development Bank to cooperate with the new bank, provided projects meet certain standards.
Treasury Secretary Jacob J. Lew flew to Beijing this week to deliver that message to Prime Minister Li Keqiang. Yet the shift to a more constructive position was viewed as late, and the repercussions of what many considered poor handling by Washington were on display at the Boao Forum for Asia in southern China last weekend, where President Xi Jinping spoke about his views on Asia to more than 1,000 delegates, many from outside China.
“I was struck by how much praise there was for China from elsewhere, and how the United States seemed to be absent,” Ms. Glaser said.
Now, the onus is on the Chinese organizers to build an institution that meets transparency, lending and environmental standards, and that fits the demands of many kinds of members with different agendas.
The interim head of the bank, Jin Liqun, who has worked at the World Bank and the Asian Development Bank, is “an experienced, savvy guy,” said Nicholas R. Lardy, senior fellow at the Peterson Institute for International Economics in Washington. “He’s hiring an able staff of about 40 people, half from China’s Finance Ministry, half recruited internationally. He says he wants to hire the best staff he can get.”
Yufan Huang contributed research.
source »
One of the significant sources of funds for the Cabal is the healthcare industry which registered a whopping $3.09 trillion in 2014, and is projected to soar to $3.57 trillion in 2017, in the US alone. We believe that this is just a conservative figure.
We can avoid using drugs, defeat any viral attack and scaremongering easily by knowing how to build our own comprehensive antiviral system. Find more about it here.