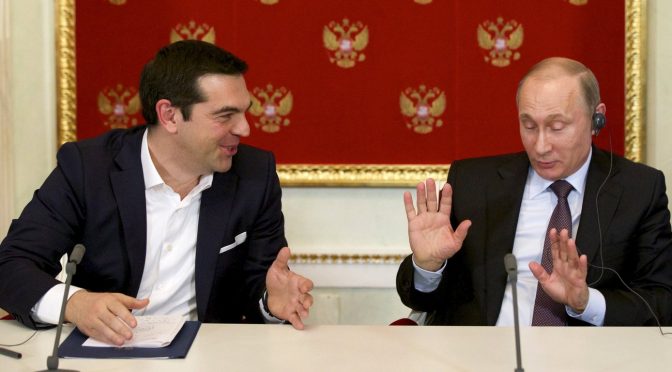 Greek Tsipras’ visit to Putin has concluded without financial packages being talked about, and yet Greece was able to pay $450 million to IMF on time. Find out how…

https://www.youtube.com/watch?v=WR3bY46-vN4
Video intro: Greece and Russia flirt but no finance deals the Toronto Orchestra tells us why it censors musicians, and an American police officer is charged with murder for shooting an unarmed black man.

Greek Prime Minister Alexis Tsipras’ gamble in taking a two-day trip to meet Russian President Vladimir Putin in Moscow may well pay-off, but may well be at the expense of the reputation and powerbase of German Chancellor Angela Merkel.

Tsipras’ decision to go to Moscow, amid his huge bailout battle with Europe should come as no surprise to historians. Most of the current Greek minority population in Russia comprises descendants of Medieval Greek refugees, from the Byzantine Empire, the Ottoman Balkans, and Pontic Greeks from the Empire of Trebizond and Eastern Anatolia.

Despite Tsipras being atheist, he is keen to play-up the Orthodox Christian bond between Greece and Russia, which will play well to the significant population of Greek descendants who make up large communities in Moscow and St Petersburg. He even laid a wreath at the Tomb of the Unknown Soldier.

In Moscow, honoring those who stood up to, and defeated fascism–a true victory of the people. #Greece pic.twitter.com/35V5OSqwBS

Having paid off its latest loan ($490m) to the International Monetary Fund on April 9, all eyes are on the next payment Greece will have to make every week in April and the further $7.75 billion it will have to find in May and June, while struggling to pay its own government staff and state pensions.
Greece Exit or Russian Sanctions?
By going to Moscow, Tsipras is playing a grand game. Germany’s Angela Merkel is on record as having said a Greek Exit from the Euro would mean the end of the European dream. Many analysts believe a Grexit would consign the Euro to a less valuable currency, with countries able to pick and choose when and how they adopt it. It would devalue the brand.

At this morning's meeting w/@PutinRF_Eng we created a new foundation for Greek-Russian relations. #Greece

Better Off Alone? Grexit Could Be Better for EU, Better for Greece
.
Meanwhile, with the European Union due to vote on whether to continue — or even increase — sanctions against Russia in June, Tspiras has one other trump card up his sleeve. The vote requires all 28 states to agree, and Tsipras has threatened to derail the sanction vote, which would prove hugely damaging to the EU, as a body of states.There have already been rumblings from some countries who are unhappy with the course of action against Russia over Ukraine and Crimea.
“We need to leave behind this vicious cycle,” Tsipras told reporters.

“Greece is a sovereign country with an unquestionable right to implement a multi-dimensional foreign policy and exploit its geopolitical role.”

Merkel is facing her own demons at home. She is aware of anti-Greek bailout sentiment on the streets and is also squeezed politically between the more conservative elements in the Christian Democratic Union (CDU) and the Eurosceptic Alternative for Germany (AfD) party.

Under pressure to make Greece put an end to its culture of tax avoidance and reform its economy, Merkel is stuck between being seen to be tough on Greece and fearing the effect of a Grexit on the rest of Europe. 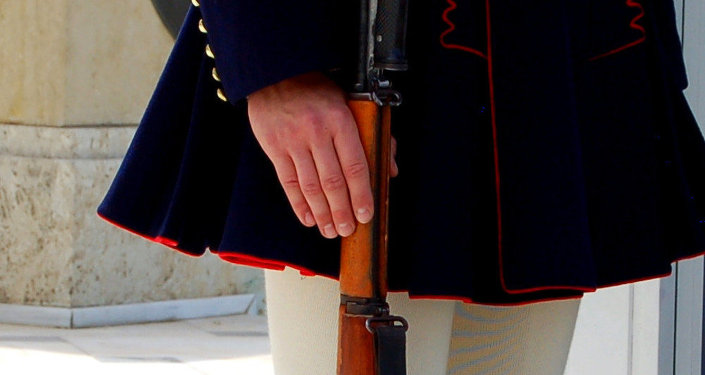 © Flickr/ Robert Wallace
Time to Pay: Greece Says Germany Owes $303 Billion for Nazi Atrocities
.
Ahead of the vote on Russian sanctions in June, Merkel may well see bending to the demand from Tsipras for a more lenient approach to his country’s woes and agreeing a further bailout as a price she has to pay for keeping the Euro together and showing the EU remaining united in its stance against Moscow.But in doing so, she will have lost face at home and been seen to bend to Greece.
“The visit could not have come at a better time,” Putin told reporters during Tsipras’ visit this week.
Read more: http://sputniknews.com/europe/20150409/1020661079.html#ixzz3Wq0CGSz2

.
Well, both the body and the language says it all 😉
One of the significant sources of funds for the Cabal is the healthcare industry which registered a whopping $3.09 trillion in 2014, and is projected to soar to $3.57 trillion in 2017, in the US alone. We believe that this is just a conservative figure.
We can avoid using drugs, defeat any viral attack and scaremongering easily by knowing how to build our own comprehensive antiviral system. Find more about it here.