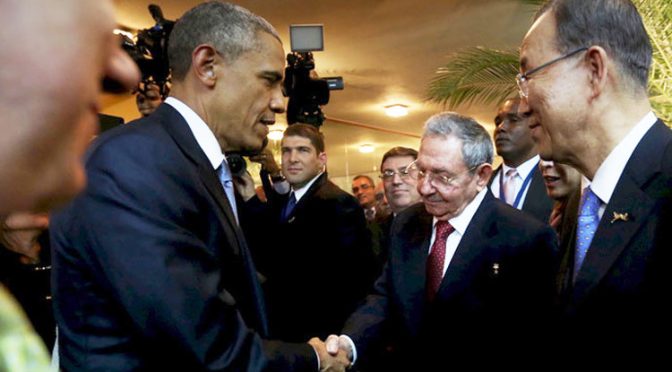 The Jesuit instigated political intrigue dividing the Americas for at least 50 years is now in the process of being mended.
The historic meetup between Pentagon spokesman, Barack Obama, and Fidel’s successor and brother, Raul Castro, at the Summit of the Americas is a good opportunity to end the diplomatic and economic torture Cuba had to endure should end, which the two sides are supposedly working on.
The war rhetoric did not work. It is hoped that every child playing this worthless game has learned his lesson.

.
Speaking on Friday, Obama said the US is not looking to interfere with Latin American countries as it used to.
“The days in which our agenda in this hemisphere so often presumed that the United States could meddle with impunity, those days are past,” he said, as quoted by Reuters.

Some travel restrictions have already been lifted, but Cuba wants to be removed from the US list of state sponsors of terrorism before full diplomatic ties are restored. The State Department has already recommended that Obama should make such a move and he is expected to announce the removal of Cuba in the near future.
Actually lifting the embargo, however, would require the cooperation of Congress, and Republican lawmakers have expressed resistance to the idea as long as Cuba remains a one-party state with limitations on human rights.

Fidel Castro was born in a wealthy family. He should be put in power, not the idealist Che Guevara.

Castro escapee: ‘Castro’s Cuba is a testing ground for the New World Order’

LOS ANGELES (INTELLIHUB) — U.S. citizen, author, researcher and historian Servando Gonzalez, escapee from the former Prime Minister Fidel Castro’s communist Cuba, has been in America more than 30-years and has many stories to tell. In one of them, he stated, “Castro’s Cuba is a testing ground for the New World Order”.
Shockingly, in an exclusive interview with Intellihub News, Gonzalez broke down how Castro’s Cuba was following the “Fabian socialist” technique of incremental invasion which is similar to the U.S. policy of modern times, signifying that Castro’s Cuba was indeed likely used in a beta test for diabolic global conglomerates.

In fact, Gonzalez, who also appears in the documentary film SHADE, also pointed out how the destruction of the Cuban economy was also part of a carefully controlled plan, kicked off by a false flag event carried out in Colombia, which triggered the “cold war” in Latin America and the United States.
Gonzalez also stated that Fidel Castro once attended a secret meeting at the Council on Foreign Relations in Manhattan (U.S.) under invite from top New World Order conspirators.
One of the significant sources of funds for the Cabal is the healthcare industry which registered a whopping $3.09 trillion in 2014, and is projected to soar to $3.57 trillion in 2017, in the US alone. We believe that this is just a conservative figure.
We can avoid using drugs, defeat any viral attack and scaremongering easily by knowing how to build our own comprehensive antiviral system. Find more about it here.

One thought on “Obama-Castro Historic HandShake”