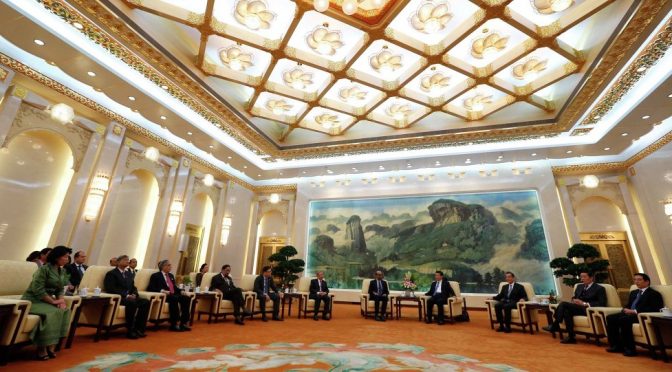 At the moment the number of founding members of the Beijing-led Asian Infrastructure Investment Bank has reached 41 countries, according to the Chinese Finance Ministry. The United States and Japan have refrained from joining the bank.


China-Led Development Bank Establishes New Multipolar Economic Order
According to the Chinese Finance Ministry, at the moment the number of founding members has reached 41 countries. The United States and Japan have refrained from joining the bank.
The initiative to set up the AIIB was announced in 2013 by Chinese President Xi Jinping and Premier Li Keqiang. In October 2014, 22 Asian states signed a Memorandum of Understanding to establish the AIIB with the headquarters in the Chinese capital of Beijing.
According to the AIIB website, the bank is expected to be fully established by the end of 2015. As of April 9, there were 37 Prospective Founding Members.
The AIIB will focus on the development of infrastructure and other productive sectors in Asia, including energy, power, transportation, telecommunications, agriculture, water supply, sanitation, environmental protection, urban development and logistics, among other areas.
Read more: http://sputniknews.com/business/20150411/1020746933.html#ixzz3Wzvq4Znu
One of the significant sources of funds for the Cabal is the healthcare industry which registered a whopping $3.09 trillion in 2014, and is projected to soar to $3.57 trillion in 2017, in the US alone. We believe that this is just a conservative figure.
We can avoid using drugs, defeat any viral attack and scaremongering easily by knowing how to build our own comprehensive antiviral system. Find more about it here.