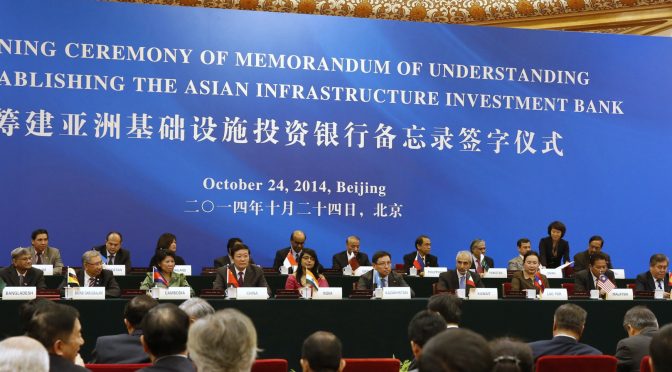 The China-led Asian Infrastructure Investment Bank (AIIB) has approved 57 countries as founding members after including an extra seven, according to China’s Finance Ministry.
Sweden, Israel, South Africa, Azerbaijan, Iceland, Portugal and Poland were all included as founding members, according to a statement released by the ministry on Wednesday. The ministry added that although the March 31 deadline for founding membership application has passed, the bank will continue to accept new members. China has rejected requests from North Korea and Taiwan to join the investment bank.

The AIIB is an “open and inclusive multilateral development bank,” China’s Vice Finance Minister Shi Yaobin was cited as saying by Xinhua news agency. The 57 founding members cover five continents, including Asia, Oceania, Europe, Latin America and Africa, according to Shi. The founding members will have priority over other countries which might sign up later, as they possess the right to establish the rules for the bank.
READ MORE: Russia officially joins $50bn China-led infrastructure bank
Russia became a founder of the AIIB after applying for membership two weeks ago. Joining the bank means Russian companies will be able to take part in infrastructure projects in the Asia-Pacific region as well get access to foreign investment in Russia.
The US and Japan are the two major countries that have abstained from joining the AIIB. While the US has been pressing its allies not to join the institution which is expected to challenge the Washington-based World Bank, Japan hesitated over its relations with Washington and the AIIB’s potential rivalry with the Asian Development Bank. Earlier this month, Washington reportedly questioned Japan following the rumors of its possible participation but Tokyo has denied everything.
[soundcloud url=”https://api.soundcloud.com/tracks/200767738″ params=”color=00cc11″ width=”100%” height=”166″ iframe=”true” /]
The Asian Bank for infrastructure investment (AIIB) was established in 2014 by China. The bank will finance infrastructure projects in the Asia-Pacific Region; its headquarters will be in Beijing. The initial subscribed capital of AIIB will be $50 billion and is planned to be increased to $100 billion. The AIIB will provide financing for roads, railways, airports and other infrastructure projects in Asia. It is expected to be established by the end of this year.
RT
One of the significant sources of funds for the Cabal is the healthcare industry which registered a whopping $3.09 trillion in 2014, and is projected to soar to $3.57 trillion in 2017, in the US alone. We believe that this is just a conservative figure.