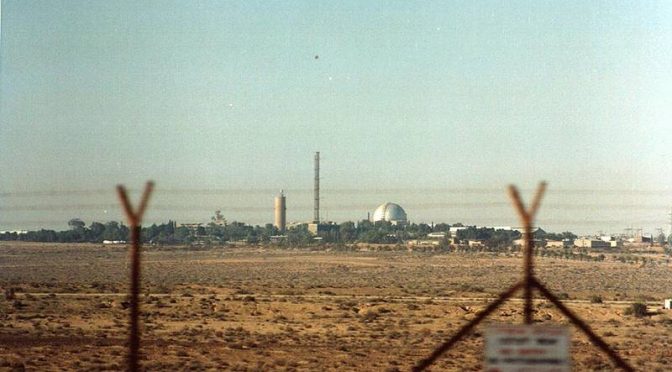 For decades, the world has known that the massive Israeli facility near Dimona, in the Negev Desert, was the key to its secret nuclear project. Yet, for decades, the world—and Israel—knew that Israel had once misleadingly referred to it as a “textile factory.” Until now, though, we’ve never known how that myth began—and how quickly the United States saw through it. The answers, as it turns out, are part of a fascinating tale that played out in the closing weeks of the Eisenhower administration—a story that begins with the father of Secretary of State John Kerry and a familiar charge that the U.S. intelligence community failed to “connect the dots.”
In its final months, even as the Kennedy-Nixon presidential race captivated the country, the Eisenhower administration faced a series of crises involving Cuba and Laos. Yet, as the fall of 1960 progressed, President Dwight D. Eisenhower encountered a significant and unexpected problem of a new kind—U.S. diplomats learned and U.S. intelligence soon confirmed that Israel was building, with French aid, a secret nuclear reactor in the Negev Desert. Soon concluding that the Israelis were likely seeking an eventual nuclear weapons capability, the administration saw a threat to strategic stability in the Middle East and a nuclear proliferation threat. Adding fuel to the fire was the perception that Israel was deceitful, or had not “come clean,” as CIA director Allen Dulles put it. Once the Americans started asking questions about Dimona, the site of Israel’s nuclear complex, the Israelis gave evasive and implausible cover stories.
A little anecdote about an occurrence sometime in September 1960 sheds light on the development of U.S. perceptions that Israel was being less than honest about Dimona. That month, Addy Cohen, then the young director of the Foreign Aid Office at the Israeli Finance Ministry, hosted the U.S. Ambassador to Israel Ogden Reid and some of his senior staff for a tour of the Dead Sea Works—a large Israeli potash plant in Sdom, on the Dead Sea coast of Israel. The Israeli Air Force provided a Sikorsky S-58 helicopter to fly the American group from Tel Aviv to Sdom. As they were returning on the helicopter, near the new town of Dimona, Reid pointed to a huge industrial site under heavy construction and asked what it was.

Ambassador Reid’s question may not have been that innocent. A few months earlier, the U.S. embassy at Tel Aviv had already heard rumors—which it reported back to Washington—about a secret nuclear complex under construction in the Negev. This was a good opportunity to ask questions to an Israeli official who might know. As it happened, Cohen, a close aide to Finance Minister Levi Eshkol, was indeed the right person. He knew about the secret project because Dimona “was discussed in one of the Treasury Ministry executive meetings under Eshkol.” Cohen also knew that he could not share what he knew with his American friends.
“I was not prepared to [answer] Ambassador Reid’s question [about the Dimona site],” recalls Cohen, who is now 87 years of age and lives in Israel, so “I ad-libbed by referring to Trostler, the Jerusalemite architect [a relative of his wife], who actually designed a textile plant there [at Dimona].”
“Why, that’s a textile plant,” responded Cohen to the question. Cohen’s answer was not completely false, but it was surely evasive. Looking back, Cohen told us this month, “It may have transpired that I was the first one who referred to the project as a ‘textile plant’ but I can assure you that it was not planned.”
Over the years, the “textile factory” story has been cited often as Israel’s official early cover story and it acquired legendary status, but exactly when the story came about has been a mystery. Cohen’s new statement, paired with recently unearthed U.S. government documents, clarifies for the first time this historical puzzle and sheds new light on how Washington missed warning signs about Dimona, how it belatedly discovered the reactor and, later, how it reacted to the finding. It’s a particularly fascinating story set against the backdrop of the modern-day international negotiations over Iran’s budding nuclear ambition and the secrets its program holds.
The Eisenhower administration’s “discovery” of Dimona was belated indeed, more than five years after Israel had made a secret national commitment to create a nuclear program aimed at providing an option to produce nuclear weapons; more than three years after Israel had signed a secret comprehensive nuclear bargain with France; and two years or more after Israel had begun the vast excavation and construction work at the Dimona site. It was clearly a major blunder of American intelligence. In comparative terms, it was probably as severe as the failures to anticipate the Indian nuclear tests of 1974 and 1998.
What was a breakdown of U.S. intelligence was a tremendous counterintelligence success for Israel, providing precious time for the highly vulnerable Dimona project. Had the United States discovered Dimona two years earlier—even a year earlier—the young and fragile undertaking might not have survived the weight of U.S. and world pressure generally.
This article, recounting the Dimona discovery and its implications, is based on a special collection of declassified documents published on Wednesday by the National Security Archive, the Nuclear Proliferation International History Project, and the Center for Nonproliferation Studies of the Middlebury Institute of International Studies at Monterey.
The Israeli Decision and Lapses in U.S. Intelligence
The Americans were truly surprised by the audacity of the Israeli nuclear project. Soon after Prime Minister Ben-Gurion came to power in 1955, he launched a secret initiative to determine whether, and how, Israel could build a nuclear infrastructure to support a national program aimed at producing nuclear explosives. A senior defense official named Shimon Peres took charge of the project. Within three years, he did the almost impossible—transforming the idea of a national nuclear program from a vague vision into a real technological achievement. Unlike the chairman of the Israeli Atomic Energy Commission (IAEC), Professor David Ernst Bergmann, who preached self-reliance, Peres’ overall philosophy was that Israel must not and could not reinvent the wheel—it had to focus on finding a foreign supplier who could provide the most comprehensive nuclear package possible suited for a weapons-oriented program.