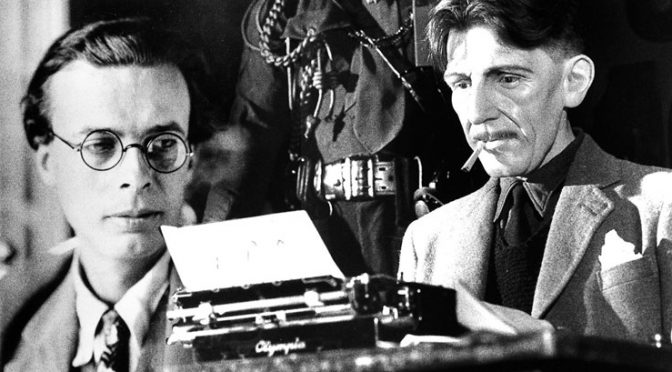 Two of the most influential writers of the last century saw in their time what’s going to happen to ours.
They were right.

Huxley wrote Brave New World in 1931 while he was living in England. By this time, Huxley had already established himself as a writer and social satirist
Huxley said that Brave New World was inspired by the utopian novels of H. G. Wells, including A Modern Utopia (1905) and Men Like Gods (1923).[7] Wells’ hopeful vision of the future’s possibilities gave Huxley the idea to begin writing a parody of the novel, which became Brave New World. He wrote in a letter to Mrs. Arthur Goldsmith, an American acquaintance, that he had “been having a little fun pulling the leg of H. G. Wells,” but then he “got caught up in the excitement of [his] own ideas.”[8] Unlike the most popular optimist utopian novels of the time, Huxley sought to provide a frightening vision of the future. Huxley referred to Brave New World as a “negative utopia”, somewhat influenced by Wells’ own The Sleeper Awakes (dealing with subjects like corporate tyranny and behavioural conditioning) and the works of D. H. Lawrence.

Eric Arthur Blair (25 June 1903 – 21 January 1950),[1] who used the pen name George Orwell, was an English novelist, essayist, journalist and critic. His work is marked by lucid prose, awareness of social injustice, opposition to totalitarianism, and commitment to democratic socialism.[2][3]
Orwell wrote literary criticism, poetry, fiction, and polemical journalism. He is best known for the dystopian novel Nineteen Eighty-Four (1949) and the allegorical novella Animal Farm (1945). His non-fiction works, including The Road to Wigan Pier (1937), documenting his experience of working class life in the north of England, and Homage to Catalonia (1938), an account of his experiences in the Spanish Civil War, are widely acclaimed, as are his essays on politics, literature, language, and culture. In 2008, The Times ranked him second on a list of “The 50 greatest British writers since 1945”.[4]
Orwell’s work continues to influence popular and political culture, and the term Orwellian—descriptive of totalitarian or authoritarian social practices—has entered the language together with several of his neologisms, including cold war, Big Brother, Thought Police, Room 101, doublethink, and thoughtcrime.[5]

Huxley’s Letter to Orwell Regarding “1984”

By Marcie Gainer on March 18, 2015 in History
In case you aren’t aware, Aldous Huxley was George Orwell’s French teacher at Eton College. The below letter contains Huxley’s brief review and initial thoughts on Orwell’s iconic masterpiece.
Wrightwood. Cal.
21 October, 1949
Dear Mr. Orwell,
It was very kind of you to tell your publishers to send me a copy of your book. It arrived as I was in the midst of a piece of work that required much reading and consulting of references; and since poor sight makes it necessary for me to ration my reading, I had to wait a long time before being able to embark on Nineteen Eighty-Four.
Agreeing with all that the critics have written of it, I need not tell you, yet once more, how fine and how profoundly important the book is. May I speak instead of the thing with which the book deals — the ultimate revolution? The first hints of a philosophy of the ultimate revolution — the revolution which lies beyond politics and economics, and which aims at total subversion of the individual’s psychology and physiology — are to be found in the Marquis de Sade, who regarded himself as the continuator, the consummator, of Robespierre and Babeuf. The philosophy of the ruling minority in Nineteen Eighty-Four is a sadism which has been carried to its logical conclusion by going beyond sex and denying it. Whether in actual fact the policy of the boot-on-the-face can go on indefinitely seems doubtful. My own belief is that the ruling oligarchy will find less arduous and wasteful ways of governing and of satisfying its lust for power, and these ways will resemble those which I described in Brave New World. I have had occasion recently to look into the history of animal magnetism and hypnotism, and have been greatly struck by the way in which, for a hundred and fifty years, the world has refused to take serious cognizance of the discoveries of Mesmer, Braid, Esdaile, and the rest.
Partly because of the prevailing materialism and partly because of prevailing respectability, nineteenth-century philosophers and men of science were not willing to investigate the odder facts of psychology for practical men, such as politicians, soldiers and policemen, to apply in the field of government. Thanks to the voluntary ignorance of our fathers, the advent of the ultimate revolution was delayed for five or six generations. Another lucky accident was Freud’s inability to hypnotize successfully and his consequent disparagement of hypnotism. This delayed the general application of hypnotism to psychiatry for at least forty years. But now psycho-analysis is being combined with hypnosis; and hypnosis has been made easy and indefinitely extensible through the use of barbiturates, which induce a hypnoid and suggestible state in even the most recalcitrant subjects.
Within the next generation I believe that the world’s rulers will discover that infant conditioning and narco-hypnosis are more efficient, as instruments of government, than clubs and prisons, and that the lust for power can be just as completely satisfied by suggesting people into loving their servitude as by flogging and kicking them into obedience. In other words, I feel that the nightmare of Nineteen Eighty-Four is destined to modulate into the nightmare of a world having more resemblance to that which I imagined in Brave New World. The change will be brought about as a result of a felt need for increased efficiency. Meanwhile, of course, there may be a large scale biological and atomic war — in which case we shall have nightmares of other and scarcely imaginable kinds.
Thank you once again for the book.
Yours sincerely,
Aldous Huxley

They have been warning us along the way. We should have listened.
One of the significant sources of funds for the Cabal is the healthcare industry which registered a whopping $3.09 trillion in 2014, and is projected to soar to $3.57 trillion in 2017, in the US alone. We believe that this is just a conservative figure.
We can avoid using drugs, defeat any viral attack and scaremongering easily by knowing how to build our own comprehensive antiviral system. Find more about it here.

One thought on “Huxley’s Letter to Orwell Regarding “1984””