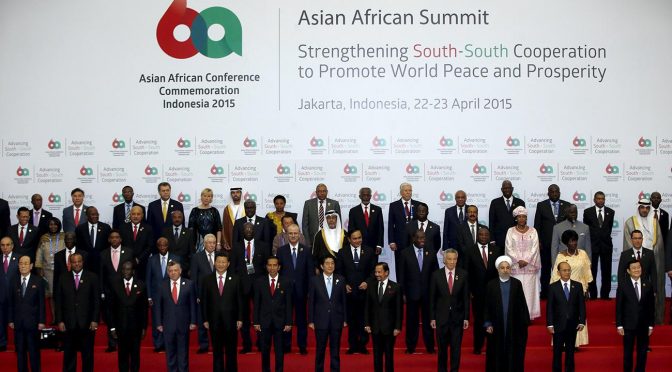 Self determination for countries in Asia and Africa is now unstoppable. No longer will decisions be coming from regional representatives of the West as it was always the case decades ago.

The mechanisms for the implementation of worldwide development, well, they’ve been here all along, are now being revitalized.
Without the Khazarian Mafia/ Jesuit/CIA’s interference and geopolitical intrigues, we would not have wasted 60 years on regional turmoils and ethnic conflicts.
To ensure that no amount of political pressure could influence the East’s journey towards prosperity for all, both Chinese and Russian military organizations are now in the process of being integrated synergistically.
Together, the sheer number of fully equipped Chinese infantry battalions and the technologically advanced Russian air power should be more than enough deterrence against outsiders’ blinded attempts on furthering their colonial ambitions.


China and Russia have agreed to jointly safeguard peace, stability and security in northeast Asia, officials said after a high-level meeting in Shanghai.
Assistant Chinese Foreign Minister Liu Jianchao and Russian Deputy Foreign Minister Igor Morgulov co-chaired the first Sino-Russian consultation meet on northeast Asia security in Shanghai on Thursday.
China, Japan and South Korea are key north-east Asian countries. There has been renewed urgency by the administration of Japan’s Prime Minister Shinzo Abe to reset frosty relations by coordinating bilateral summits with his Chinese and Korean counterparts, Xi Jinping and Park Geun-hye. China and South Korea had earlier jointly condemned Japanese Prime Minster Shinzo Abe’s visit to a controversial shrine honoring war criminals alongwith those who died in World War II.
Meanwhile, Russian and Chinese defense officials, along with foreign ministry representatives, were present at Thursday’s meet in Shanghai.
“The two sides discussed the security situation in northeast Asia, and agreed to enhance dialogues and coordination to promote peace and stability in the region,” said a Chinese Foreign Ministry statement.
Chinese President Xi Jinping and Japanese Prime Minister Shinzo Abe have met in Indonesia on Wednesday, although tensions between the two north-east Asian countries remain.
Defiant lawmakers from Abe’s ruling party and the opposition on Wednesday visited a Japanese war shrine in Tokyo that is seen in China and South Korea as a symbol of Tokyo’s past militarism.
Meanwhile, Chinese Defense Minister Chang Wanquan had met with his Russian counterpart Sergei Shoigu in Moscow last week where the two leaders pledged to push ahead with bilateral “pragmatic, comprehensive military cooperation”.
China’s President Xi Jinping has made a strong military a key plank of his plan for a revitalized China.
In Moscow last week, the Chinese Defense Minister said China needs a defense force matching its development needs and that a fair and just international order needs to be established.
“The Chinese People’s Liberation Army is an active contributor to world peace, stability and development. China is a constructive member in international security. With its growing economy, China needs a national defense and military force that is commensurate with its development needs, not only to safeguard national interests, but to improve its fulfilment of its international obligations,” the Chinese Defense Minister said.
China will raise its defense budget by around 10 per cent this year, an announcement made during the annual session of the country’s top legislature in March said.
Earlier this month, China became the first foreign customer of Russia’s most advanced air and missile defense system, the S-400 air and missile defense systems.