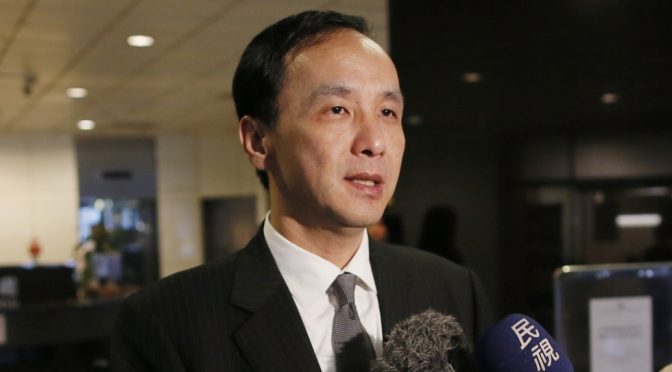 (Xinhua) Updated: 2015-04-24 10:41
BEIJING – Leaders of the Communist Party of China (CPC) and the Taiwan-based Kuomintang (KMT) party will meet in Beijing in May, a mainland official said on Friday.
Leaders of the two parties are expected to exchange views on CPC-KMT exchanges and relations across the Taiwan Straits during the meeting, said Ma Xiaoguang, spokesperson of the Taiwan Work Office of the CPC Central Committee.
KMT Chairman Eric Chu will lead a delegation to visit Beijing after taking part in the Cross-Straits Economic, Trade and Culture Forum which is scheduled to be held on May 3 in Shanghai, Ma said.
“This is an important event of the two parties’ high-profile exchanges,” Ma said.

The head of Taiwan’s ruling Kuomintang party said on Sunday he planned to meet President Xi Jinping next month, in what will be the first visit to the mainland by a KMT chief since 2008.
Eric Chu, who succeeded President Ma Ying-jeou as the party’s chairman in January, said a plan was being arranged “for a meeting of the two party leaders” at a May forum in Shanghai with the mainland’s Communist Party. Details of the meeting had not been finalised, he said. Xi heads the party in addition to holding the presidency.
Local media said Chu would fly to Shanghai on May 2 and address the forum’s opening the next day, adding that he also planned to speak to university students there.
In 2005 Lien Chan made the first trip to the mainland by a KMT chief since the two sides split at the end of a civil war in 1949. The landmark visit and the ensuing annual forum paved the way for the fast improvements in relations that have taken place since Ma came to power in 2008. He was re-elected in 2012.
Ma was also party chairman from 2009-2014, but despite the improved ties he never traveled to the mainland. Wu Po-hsiung was the last KMT chairman to visit the mainland, in 2008.
In June 2010 the two sides signed a trade pact known as the Economic Cooperation Framework Agreement, widely seen as the boldest step yet towards reconciliation.
But public sentiment has turned against the Beijing-friendly approach as voters say trade deals have been agreed in secret and not benefited ordinary Taiwanese. In March last year around 200 students occupied parliament for more than three weeks in protest against a controversial services trade pact, while thousands rallied in support of what became known as the “Sunflower Movement”.
The KMT suffered its worst-ever showing in local polls in November – seen as a barometer for presidential elections in 2016 – with its Beijing-friendly policy blamed for alienating voters.
Despite the setback, Ma said last week ties with the mainland were “back to normal”.
This article appeared in the South China Morning Post print edition as KMT chief to meet Xi in Shanghai