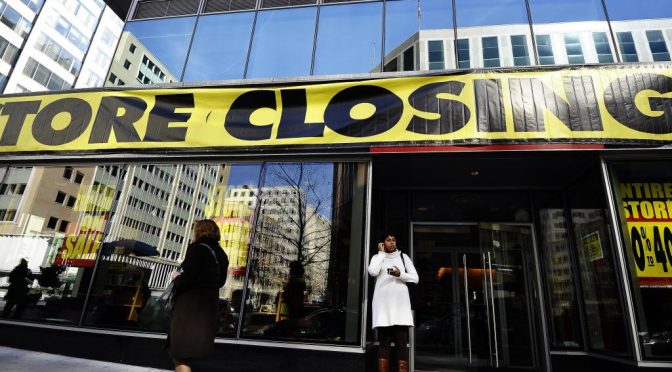 Online shopping and payment systems, complemented by door to door delivery systems, have effectively bypassed the traditional eye popping glass windows and cutting edge shelving systems of the big names in the retail industry.
US’s Amazon, Ebay and China’s AliExpress are dominating the global market of just about anything under the sun, to the detriment of traditional shops employing thousands around the world. This is another proof that the full use of technology is grossly incompatible with the current monetary economic system + job model.
What would society do to those who are losing their jobs due to, in this case, internet shopping?

Even before the end of calendar year 2014, the largest U.S. retail chains had announced hundreds of store closings that will be happening in the calendar year 2015.  The U.S. teen apparel retail chain Wet Seal then made a big splash early in the 2015 calendar year when its employees created some high profile social media revenge in response to store closures that were scheduled with little notice to its employees.
Wet Seal had previously told its employees that it was not planning on closing stores, but would be revitalizing, and reimagining its brand instead.  Employees claimed the company’s leaders lied about that so that there wouldn’t be a mass employee exodus during the critical 2014 Christmas holiday shopping season.
Perhaps the Wet Seal leaders did lie.  Or perhaps a $28.8 million default notice from creditor Hudson Bay Master Fund Ltd. on January 2, 2015 just changed their minds.  Whatever the truth is, Many, if not all of Wet Seals retail stores will be closing in the U.S. in 2015, and it is likely to be just the start of some messy, complicated store closings expected from the largest U.S. retail chains in 2015.
Click to Skip to All 2015 Store Closings List Arranged by Store Numbers >>
Click to Skip to All 2015 Store Closings Arranged Alphabetically >>
The general opinion among U.S. retail consumers and casual U.S. retail industry observers is that store closings are “bad” and a sign of weakness, while store openings are “good” and a sign of growth, expansion, and success.
The store closings by U.S. retail chains in 2015 are not so easily categorized.
Retail store closings in the U.S. have less to do with economic implications and more to do with sociological insights.  Store closings are no longer about discretionary income as much as they are about consumer empowerment and how retail consumption is shapeshifting in response to rapidly changing consumer behaviors and preferences.
The amount of commercial retail store space in the U.S. grew 12% from 1970 to 2010.  In a consumer-driven economy where approximately 70% of the GDP is dependent on the purchase of goods and services, this seems like a positive indicator of economic expansion and strength. But during that same time period, the population of the U.S. consumers only grew 52%.  So rather than being a sign of economic stability, the number of retail stores in the U.S. is more of a sign of retail store supply exceeding retail store demand.
Does the U.S. marketplace need 50 square feet of retail space for every man, woman, and child within the country’s borders?  The ongoing and steady post-recession stream of store closings since seems to indicate that the answer is “no.”
It’s not that consumers haven’t been making money and spending it on retail goods and services since the Great Recession.  Rather, it’s that consumers are losing interest in and patience for the retail store distribution model.  The tedious and time-consuming process of slogging from store to store seeking “the perfect” whatever is becoming less of an entertaining recreational hobby, and more of an avoidable annoyance.  Retail store closings in the U.S. are no longer a reflection of poor economic health, they are a reflection of an antiquated distribution system that is increasingly losing its appeal to the average consumer.
What follows is a complete, updated, and ongoing list of U.S. retail chains that are closing underperforming retail store locations, downsizing, or going bankrupt and out of business in the 2015 calendar year.

Although there were significant store closing plans announced by retail chains like Radio Shack and Target and restaurant chains like Ruby Tuesday and Friendly’s at the beginning of 2015, not all of the largest U.S. retail chains chose to make the company’s total number of U.S. and global store closings available at the beginning of the year.
Of course the retail companies on the growing 2015 Retail Bankruptcies list didn’t have the option of hiding their 2015 store closing plans.
But other retail chains like Gap, Ann Taylor, Sbarro, and Wendy’s seem to be choosing to quietly close a small number of stores each quarter, hoping that the sum total of those 2015 store closings will go relatively unnoticed by shareholders and members of the press.
This is not to suggest that there are retail chains that are deceptively hiding their 2015 store closing activities.  There are probably some retail leaders who attempt to control the press and stock traders by keeping a lid on future store closing news.  More than likely, though, it’s the volatility in the global and U.S. retail industry that prevents the leaders of some of the largest U.S. based retail chains from making specific plans about things like store closings and store openings an entire year and a half.  They sometimes just don’t know what they don’t know.
<< See also Retail Chains Closing the Largest Numbers of Stores in 2015 <<
What follows is a list of U.S. retail chains that have closed or have announced intentions to closes in 2015.
So far, these store closings are confined to single retail store locations.  But as the 2015 progresses, it is likely that these chains will continue to quietly close additional underperforming locations as commercial leases expire.  BOOKMARK THIS PAGE for frequent updates throughout 2015 as more official information about store closings are made available by these retailers.
The number in the left column is the total number of stores that have been designated for closing in the calendar year of 2015 and beyond. The latest additions are indicated with bold lettering. This list was last updated on April 12, 2015.
US and Global Retail Chain 2015 Store Closing Plans and Total Numbers (continued):
1        American Steakhouse
1        Ann Taylor
1        Ann Taylor Loft
1        Bag ’N Save
1        Banana Republic
1        Bath & Body Works
1        Bed Bath & Beyond
1        Chili’s
1        Cost Plus World Market
1        Disney Store
1        e2/e2Go (Emeril Restaurant)
1        Eddie Bauer
1        Express
1        f.y.e.
1        Freshii
1        Gap
1        Godfather’s Pizza
1        Goodyear
1        Hallmark
1        Harding’s
1        Harris Teeter
1        Harry & David
1        Howard Johnson’s Restaurant
1        Jimmy Buffett’s Margaritaville
1        JJill
1        Kroger
1        LawLers Barbecue and Catfish
1        Lone Star Steakhouse
1        Los Tres Amigos Restaurant
1        Neato Burrito
1        Olga’s Kitchen
1        Piperlime
1        Pottery Barn Kids
1        Sbarro
1        Smashburger
1        Tractor Supply Co.
1        Thomasville of Meridian
1        Toby Keith’s I Love This Bar & Grill
1        Wendy’s (Costa Rica)
1        White House Black Market