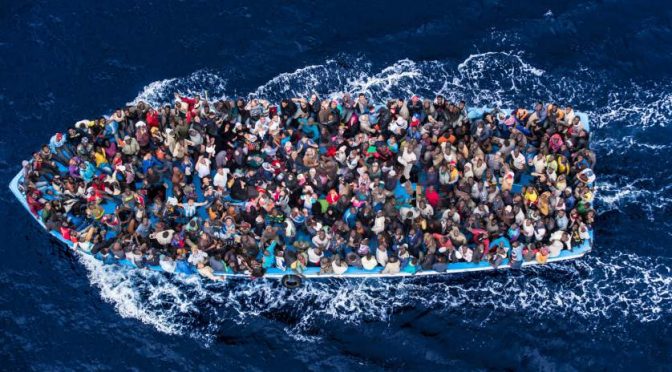 Stay Home and Die Slowly or Take to a Perilous Sea and Maybe Live?

The American Propaganda Ministry (composed of all three branches of the US federal government) has constantly and persistently proclaimed that their wars (unprovoked wars) and bombings of millions of innocent people in various Middle Eastern nations have always been benign – as impossible as that sounds.
In fact, the actual design of what used to be our government has been threefold:

Using radioactive depleting uranium (DU) bombs, missiles, and bullets, the United States government, with the approval of a taciturn and complicit American public, has destroyed one foreign infrastructure after another, while letting their own basic underlying economic framework decay into seed.
By some accounts, since 9/11, US sanctions on Iraq killed one million people, mostly children and the elderly. That was soon followed by the American military killing two million people – again mostly the elderly and children.
Millions more sick Iraqis migrated into neighboring countries, where most went begging on streets.
But now with Iraq so radioactive, who is to say how long those still trying to exist in Iraqi squalor will live?
Surely Iraq was far better off before we brought “democracy” (banker control) to the country.
In Iraq, Afghanistan, Gaza, Yemen, and Libya, the story of insane American imperialism has been much the same; but nowhere has US criminal psychosis been more evident than in Libya.
Before the constant US pepper-bombing of Libya, the country was a portrayal of storybook legend.
By operating his country outside the suffocating financial orbit (controlled and owned by the war criminals of the foreign Banking/Monetary Cartel), Army Colonel Muammar Gaddafi made Libya and its people the richest in Africa.
Gaddafi’s government had its own wholly-owned central bank that issued loans to its people free of interest, as riba (usury) was not permitted in Libya.
Before the fifty-two daily US/NATO bombings of Libya, Gaddafi’s government gave his citizens free healthcare and education, allowing a healthy Libya to enjoy a literacy rate of over eighty percent.
Before these insane bombings (largely of American origin) life expectancy in Libya was the highest in Africa and about ten percent above the world average.
Preceding the US-led air attacks, there was little to no unemployment in Libya. It was a nation that had the highest GDP (gross domestic product) in Africa, with less than five percent of its population classified as poor.
Libya, a hot, dry, dusty country, long suffered with a lack of clean water. But under the leadership of Colonel Gaddafi the world’s largest infrastructure project was completed. It was a man-made, underground river that provided clean drinking water to seventy percent of the Libyan people and held the potential of turning vast wastelands into farm lands – that is, until American bombs destroyed its pumping stations, thus destroying the entire project.
The awful destruction of the once free and independent Libya should serve us as a moral lesson, representative of our war atrocities in Iraq, Afghanistan, Lebanon, Gaza, and Syria, where tens of millions of innocent people have been killed, injured, maimed, and made sick and homeless in a radioactive hotbed of chaotic waste, with no known way of cleaning it up.
I am afraid that so much release of DU will cause wide-spread intergenerational DNA modification, not only among the Middle Easterners, but also amongst our own servicemen.
But still, our government and the despicable Western press calls our international crimes against humanity …
Humanitarian interventions.
Additionally, for at least eleven years, the International Zionist bankers and their chicken hawk minions in the American, English, and Israeli governments have been calling for the bombing of yet another country – Iran.
Today, Arabs all over the Middle East ask themselves a troubling question: Do I stay and die … or … do I take to the dangerous and unpredictable sea, or to the hot, ever unforgiving desert … and … a possible life in Europe.
Recently, hundreds of desperate migrants tried the ocean option. Trying to reach Europe, via the Mediterranean Sea, as many as 400 people drowned from a capsized ship.

The Western press, with its usual lies and propaganda slant, was quick to demonize the ones they called human traffickers – those who organized the failed escape from the fiery caldron of the Middle East from sure death to the possibility of life in Europe.
Of course the mainstream media said nary a word about the ruthless, soulless subhuman Controllers who ordered the massive Middle Eastern bombings, or the sickening politicians who carried out the slaughters, or the US bomber pilots who released the bombs.
May God bless those who suffer in misery. May he also bless those who die in vain efforts to live.
And may God forgive the apathetic Americans, Englishmen, and Israelis who through their ignorance are complicit in the serious US/NATO/Israeli crimes against humanity.
But more than anything else, may the God of all religions bless the millions of small and large children who have been starved, maimed or killed by American sanctions bullets, and bombs.

Courtesy of Nina Sidoreva and Richard Edmondson
Choking with tears and exhausted from incredible pain, a dying three-year-old Syrian boy said, “I will complain to God about them.”

2 thoughts on “The Terrible Choice”