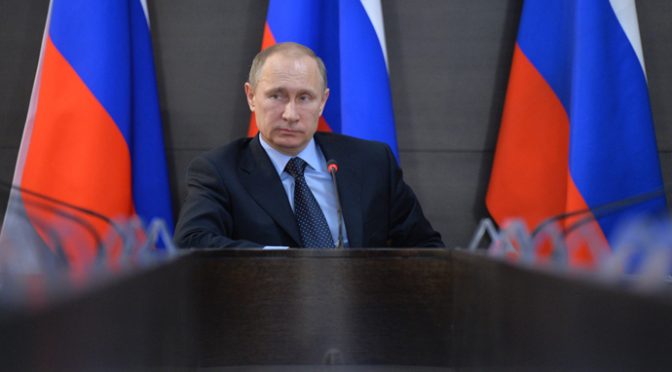 A good leader is very hard to come by. With the approaching US presidential elections, we are not seeing anyone coming out as having the same potential and caliber as the current leader of Russia.
Not yet.

How did Vladimir Putin came to power?

Hijacking an elitist political system does need unorthodox methods. See how Putin did it…

After acquiring the seat of power, Putin started running after his handlers who find themselves exiled in London and the United States.
That’s how the Russian Oligarchy got poisoned by their own medicine.

.
In a new documentary focusing on Vladimir Putin’s 15 years in power, the Russian president says communications intercepted in the early 2000s show direct contacts between North Caucasus separatists and the US secret services.
“At one point our secret services simply detected direct contacts between militants from the North Caucasus and representatives of the United States secret services in Azerbaijan,” Putin said in the film, released by Rossiya 1 TV channel on Sunday.
“And when I spoke about that to the then president of the US, he said… sorry, I will speak plainly, he said, “I’ll kick their asses”, Putin recounts his conversation with George W. Bush on the issue. A few days later, he says, the heads of Russia’s FSB received a letter from their American counterparts, which said they had the right to support opposition forces in Russia.
“Someone over there, especially the West’s intelligence services, obviously thought that if they act to destabilize their main geopolitical rival, which, as we now understand, in their eyes has always been Russia, it would be good for them. It turned out, it wasn’t,” Putin muses, saying he had warned the West about the possible dangers of supporting terrorists.
In the 1990s and early 2000s, Russia was engaged in a conflict with militant separatists in the North Caucasus, who often resorted to terror attacks. This led to a prolonged counter-terrorism operation, which only officially ended in 2009.
“President” is a two-hour long documentary built around an interview with Vladimir Putin, where he recounts the most memorable moments of the past 15 years. It touches upon matters both political and personal and features videos filmed by Putin’s personal cameraman and never seen on TV before.
READ MORE: Vladimir Putin steals the show in TIME 100 reader’s poll
Among the things discussed in the film is the attitude towards Russia in the West. “I am sometimes under the impression that they only like Russia when it’s in need of humanitarian aid”, Putin says. “Those countries’ so-called ruling circles, their political and economic elites, they only like us when we are broke, poor and stand with a begging hand. As soon as we start stating our own interests, they feel some sort of geopolitical rivalry. Who would like that?”
When asked about Crimea becoming part of Russia a year ago, Putin said it was ultimately a restoration of “historical justice”. He also said the decision was based on what people in the peninsula wanted: “If people want to return to Russia and don’t want to be ruled by neo-Nazis, radical nationalists and [Ukrainian Nazi collaborator] Bandera followers, we have no right to ditch them. It’s not because we wanted to snatch something. It’s not even because Crimea is of strategic importance in the Black Sea.”
READ MORE: Top 10 memorable moments from Putin’s marathon LIVE Q&As
Putin also discussed the challenges he faced when he first became President. When the interview’s host suggested that a group of oligarchs was in charge of Russia in the end of the 1990s, Vladimir Putin did not contradict. “They came to my office, sat in front of me and said, “Do you understand you will never be the real president?” We’ll see, I told them”, he recalls. When asked about it, he didn’t elaborate on how he dealt with the oligarchs in the end, simply saying he “used various means.”
The president named the doubling of Russia’s GDP and tripling of the average income among his top achievements over the past 15 years. The demographic situation has also significantly improved, he said. In 1999, Russia was losing almost one million people every year, whereas now it has had natural population growth for two straight years.
“All of this combined, when you think about it, you can’t help but feel satisfaction,” Putin admits.
RT

“It is completely obvious to specialists that the main peak of difficulties has been passed,” Putin said.

© Flickr/ [Jim]
Russia Interested in Chinese Investments – Finance Minister
Putin added that Russian companies have paid off their external debts despite the collapse of oil prices.Putin added that the fall in oil prices led Russia to lose around $160 billion of revenues in foreign currency. Russian companies were able to pay off $130 billion of external debts last year and paid off most of their current $60 billion debt, the Russian president said.
“I would not even call it a crisis, there are certain events, certain difficulties,” Putin added.
Putin also said that Russia seeks to attract foreign investors as part of its economic strategy.

Sputnik
One of the significant sources of funds for the Cabal is the healthcare industry which registered a whopping $3.09 trillion in 2014, and is projected to soar to $3.57 trillion in 2017, in the US alone. We believe that this is just a conservative figure.We can avoid using drugs, defeat any viral attack and scaremongering easily by knowing how to build our own comprehensive antiviral system. Find more about it here.

One thought on “The President”