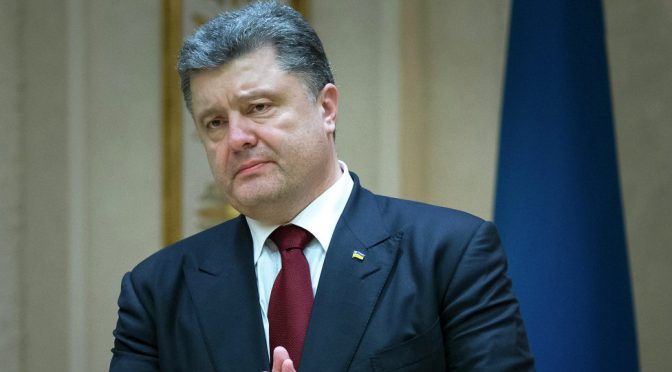 Poroshenko, the businessman, revealed in the devastating memo that would send the Nazi faction’s loyalty off the roof. For the US advisers on the ground, however, this should not come as a surprise.
Everybody has a price.

The annexation of Crimea is one of the reasons why Russia must be destroyed according to NATO. That narrative is now crashing, and they have a liability with Petro Poroshenko.

Business wins over politics in Ukraine, even up to the level of president where the most patriotic statements in public sometimes see the opposite actually happening in private.

Ukrainian President Petro Poroshenko has tirelessly promised to “take Crimea back” and built his image on aggressive patriotism. But leaked documents imply that he might have been among the first people to de-facto recognize the referendum of Crimea’s reunification with Russia.

An ex-adviser of ousted president Viktor Yanukovych published documents that show that Petro Poroshenko indirectly entered into negotiations with Russia just a month after the referendum.On April 16, just a month after the reunification, billionaire Petro Poroshenko’s Sevastopol Marine Plant received a letter from the Russian Ministry of Industry and Trade. The ministry asked the plant to report on its financial and business operations between 2010 and 2014.

Interestingly, the letter referred to the peninsula as “the Republic of Crimea” and to Sevastopol as “a federal city” — the terms used in Russian legislation.
The plant’s CEO responded to the request in due time and provided a full report including the revenues, wages and profits year by year. Later, Poroshenko appointed the Marine Plant’s CEO the chief of a major defense industry enterprise.

In essence, the plant’s manager entered into a legal relationship with Russia, which could not have happened without the approval of his chief — Petro Poroshenko.

Petro Poroshenko the Politician has relentlessly slammed Russia as an “aggressor”, seen phantom Russian armies invade Ukraine and haunted western thresholds asking for weapons to be used against his own nation.

© AP Photo/ Sergei Chuzavkov
War in Ukraine Will Be Over After Kiev Regains Crimea, Donbass – Poroshenko
.

But Petro Poroshenko the Businessman sees things differently; he does not hesitate to cooperate even with the “deadly, hideous, merciless Russia”, the Politician’s #1 enemy.Which of the two personalities will get the upper hand?
Recently, Poroshenko told local STB TV channel that the civil war would be over when Crimea and Donbass were reunited with Ukraine. Who made this statement — the Politician or the Businessman?
Sputnik