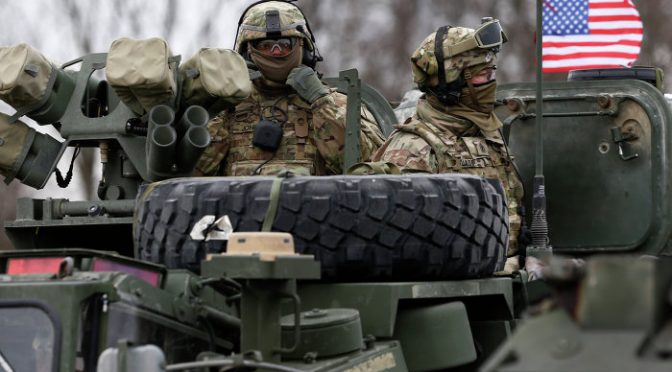 The German military were on the wrong side of history as far as the last World War is concerned, but it never deters them from expressing their collective abhorrence to Cabalist attempts to start another.

Published time: May 07, 2015 05:52
Edited time: May 07, 2015 15:13
Former top military commanders of the German Democratic Republic (GDR) penned an open letter on the eve of WWII Victory Day celebrations calling for the US and NATO to refrain from Cold War policies and cooperate with Russia to solve the Ukrainian crisis.
More than 100 top brass of the ex-GDR, the majority of whom fought on the fronts of WWII, slammed American and North Atlantic alliance leaders for using military power in the resolution of conflicts. Titled “Soldiers for Peace,” the open letter was presented in Berlin on Tuesday.
“We witness War becoming a permanent companion of humanity once again. The new world order that the USA and their allies have been trying to establish has recently led to nothing but new wars – in Yugoslavia and Afghanistan, in Iraq, Yemen and Sudan, in Libya and Somalia. These wars claimed the lives of more than two million people and forced even more out of their homes,” the letter said.
Former German generals pointed to NATO’s “intensive militarization of Europe” saying that war “has returned” to the continent.
“The United States as well as the other NATO members have recently returned to the policy of the Cold War and they justify it by imaginary Russian aggression,” said former GDR defense minister Theodor Hoffmann during the presentation of the open letter on Tuesday.
“The aim of the American strategy consists in defeating Russia as a competitor to the US as well as in weakening the EU. The US hopes to isolate Russia and to corrode its ties to Europe and particularly to Germany by admitting Ukraine to NATO,” the letter reads.
The East German commanders also blamed the US and their allies for launching an “unprecedented media campaign,” which aims to “to win the trust of people in western countries over to their cause.”
“And those taking part in this campaign are just irredeemable politicians and corrupt journalists that stir up hostility, hatred and war hysteria,” the letter states.
“We are set against military power becoming a key instrument in modern international politics. We are absolutely sure that urgent political problems cannot be resolved by military means.”
Among the signatories are two former GDR defense ministers, three former Chiefs of Staff of the National People’s Army (NPA), 19 lieutenant generals, 61 major generals and several admirals.
“Most signatories of our plea fought at the fronts of WWII and know exactly that war can by no means be a political instrument,” Hoffmann said.
He pointed out that any “participation of the modern German army in conflicts and wars waged by the West, even if it is just a sort of logistical support, runs counter to an agreement between the former Chancellor of Germany Helmut Kohl and the then East Germany leader Erich Honecker [signed on September 8, 1987], which provided that no war would be ever launched by Germany.”
The letter also stated that a new war in Europe will inevitably lead to unprecedented damage due to the destructive power of the modern arms, even turning the continent into a “lifeless wasteland.”
“Have the numerous victims of the Second World War already been forgotten? Do modern Europeans no longer remember the devastation, the many refugees and unending suffering of the people engendered by WWII? Have the latest US and NATO wars not claimed enough people’s lives?” the letter says.
The former top brass emphasize in their statement that it was the Soviet army and the Soviet people that “carried the heaviest burden in defeating fascism” and “now, on the 70th anniversary of the Victory in Europe day, we should express our gratitude to them.”
The West needs to cooperate with Moscow to solve international issues, the letter stressed, urging for a “peaceful dialogue and not combative rhetoric.” It also points out that the EU shouldn’t depend on the US in issues of military security.
“Instead of the NATO ‘Rapid Deployment force’ near the Russian border we need more tourist and youth exchanges as well as peace conferences between us and our eastern neighbor,” it adds.
There are plans to distribute the letter among members of the German parliament as well send it to the embassies of NATO countries in Germany. The organizers of the campaign also plan to send the text to Russia, so leaflets can be handled out at the Red Square parade marking the 70th V-Day anniversary on May 9 in Moscow.
RT

NATO’s anti-Russia rhetoric and troop build-up is not all about Ukraine, but rather an attempt to legitimize its militarism – policies and increasing budgets, says Jan Oberg, director at the Transnational Foundation for Peace and Future Research.
RT:General Breedlove expanded on his statement regarding alleged Russia aggression saying that Putin wants “the West out of Ukraine, and he wants Ukraine out of the West.” Do you think this saber rattling is all about Ukraine?
an Oberg: No, the narrative, the longer perspective, if anybody remembers history any more, and the West’s expansion of NATO since the end of the Cold War, which was to break the rules and the promises that were given by Western leaders to President Gorbachev that that would never happen. Now we are kind of facing the wall. Ukraine should not have been touched by the West in this way.
So, the other thing of course is militarism. Most people think that you first define a threat and then you define what military you need. It’s the other way around: if you need militarism, if you want to expand things, you invent a threat to legitimize your military policies and your budgets, which are all increasing in this particular part of the world. And of course this man is – I should refrain from joking about his name, but he’s not exactly breeding love, he’s more of a Dr. Strangelove type of personality – he is like a man who is given a scalpel to perform surgery, but he has no idea about medicine.

RT: You mentioned the budgets there, how feasible is it? European countries are being asked to increase their military budgets and Poland is certainly asking for that to happen. But given the state of the European economy, is that actually feasible for many countries?
JO: To me it’s not a matter of feasibility. It’s a matter of looking at a Europe that does not have money and determination and morals to take care of boat refugees, in which many countries are cutting down their social spending, in which we have lots of inequality,… in which we have huge poverty, and these little elites who have never been given a democratic mandate to a plan war or have nuclear weapons. There’s never been a referendum among tax payers and citizens to do so. This is something that is out of hand. None of us – Russia, the US, China, whatever – we shouldn’t spend this much money on military in a world in which there are huge needs for something else and where we ought to talk instead of threaten each other. This is an absurd world that these guys have so much available. $1,800 billion a year are spent worldwide on the military; everything the UN does is about 30. In such a world there is no democracy.
RT: Do you fear for peace in the east of Europe?
JO: Of course I do. Because [there could be some person] in some situation who can’t foresee what the consequences or reactions he will get from the other side, a person who lacks of empathy, and who lacks a sense of conflict resolution, reconciliation, and management of tension. I’m not saying they intend to do so, but I’m saying human mistakes, human miscalculations take place and with the enormous amounts of weapons available including nuclear weapons – this could mean the end of all of us at some point. Nobody should have this power, nobody should have all these weapons in a tension situation… – there is no military solution to all these problems with Ukraine, ISIS, or whatever. Why are we having all these weapons if they are not the solution?… General Breedlove has no idea about conflict resolution, reconciliation, disarmament, or security, not to speak of peace.
[soundcloud url=”https://api.soundcloud.com/tracks/204212537″ params=”color=00cc11″ width=”100%” height=”166″ iframe=”true” /]
RT
One of the significant sources of funds for the Nazionist Khazarian Mafia is the healthcare industry which registered a whopping $3.09 trillion in 2014, and is projected to soar to $3.57 trillion in 2017, in the US alone. We believe that this is just a conservative figure.
We can avoid using drugs, defeat any viral attack and scaremongering easily by knowing how to build our own comprehensive antiviral system. Find more about it here.