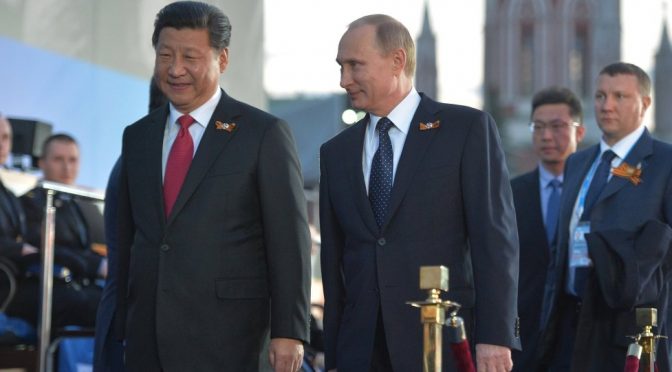 The very close relationship between Russia and China in terms of geopolitics and economics is now considered as a legitimate threat to the survival of the Eurozone.

Call it “shooting on the foot”, the EU sanctions against Russia, which drive the latter closer to China, have backfired and the pain would be felt for years to come as the BRICS countries exercise their inherent rights to a bigger say on world affairs.
It is time for the West to take the cue from the East, or it can keep feeding the delusion of self-importance and the saber rattling even when nobody’s taking notice anymore.
The reelections of Bibi Netanyahu and Cameron are both signs that the West is not ready for meaningful change anytime soon. In fact, it would not surprise us if the likes of Hillary Clinton or Jeb Bush would be sitting in the White House, next year or so.
However, we love to impressed by and be proven wrong.

Xi Jinping Says Ready to Give Renewed Drive to Russia-China Relations
The analyst also predicted that trade between Russia and China will reach $200 billion in the next several years.
“Russia and China are becoming best friends,” Charmoy concluded.
Meanwhile, the analysts said European companies that once were very successful in the Russian market are losing their positions due to sanctions and the geopolitical situation.
“However, Europe should be very careful because Russia is a very important market for it.”

Moscow, Beijing Build Up Ties in Face of US, NATO Expansion – Russian MP
This week during the Chinese President Xi Jinping’s visit to Moscow, a wide range of agreements in the trade, economic and energy fields were inked. The main issue on the agenda was an agreement to couple the Eurasian Economic Union and the Silk Road projects.
Last year, Russia’s gas-producing giant Gazprom and Chinese CNPC signed a deal to supply China with 38 billion cubic meters of gas per year over the next 30 years. The total sum of the contract is estimated to be $400 billion, the largest Gazprom contract ever. The gas price is attached to the oil price. The supplies are planned to start in four to six years.
Sputnik

Russia and China have signed a number of energy, trade and finance deals on Friday aimed at strengthening economic ties. The two countries have multiple mutual projects which “achieved a unity of views on a wide range of issues.”
Russian President Vladimir Putin and Chinese leader Xi Jinping have signed a decree on cooperation in tying the development of the Eurasian Economic Union with the “Silk Road” economic project.
“The integration of the Eurasian Economic Union and Silk Road projects means reaching a new level of partnership and actually implies a common economic space on the continent,” Putin said after the meeting with his Chinese counterpart. President Xi Jinping arrived in Moscow on Friday for the 70th anniversary celebration of the defeat of Nazi Germany in World War II. 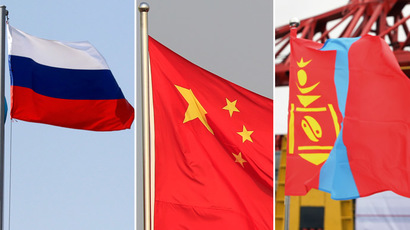 China will also invest $5.8 billion in the construction of the Moscow-Kazan High Speed Railway, the Russian President said. The railway is to be extended to China, connecting the two countries through Kazakhstan. It can become part of the route of the new Silk Road project, which is aimed at tying China with European and Middle Eastern markets. The total cost of the Moscow-Kazan high speed railroad project is $21.4 billion.
Russia’s largest gas producer Gazprom and China’s National Petroleum Corporation (CNPC) signed an agreement on the basic conditions of gas supplies from Russia to China through the Western route. The two companies decided to extend a strategic partnership agreement for five years, according to Gazprom’s CEO Aleksey Miller. The agreement provides for the construction of the first, second and third Altai pipelines.
Sberbank – Russia’s biggest lender – has signed a facility agreement with China’s Development Bank in the amount of $966 million. They also agreed on financing an industrial project by Sberbank to the tune of $256.4 million.
READ MORE: Russia-China trading settlements in yuan increases 800%
The goal of the agreement is to develop the “long-term cooperation between Sberbank and China Development Bank in the area of financing foreign trade operations between Russia and China,” Sberbank said.
Russia’s state-owned VTB Bank and the Export-Import Bank of China signed a $483.2 million loan facility agreement to finance trading operations between Russia and China.
[soundcloud url=”https://api.soundcloud.com/tracks/204559546″ params=”color=00cc11″ width=”100%” height=”166″ iframe=”true” /]
An agreement to create a leasing company which will promote the sale of the Russian Sukhoi Superjet-100 passenger planes to the Chinese and South-East Asian markets over the next three years has been set up. Russia and China will also develop a new heavy helicopter, called the Advanced Heavy Lift. The helicopter will be able to lift 38 tons and operate in mountain areas, performing a variety of missions in any weather conditions.
President Putin also said that Moscow welcomes Chinese companies’ participation in resource extraction in the Arctic and Sakhalin shelf.
Earlier on Friday, Russian Direct Investment Fund (RDIF), the Russia-China Investment Fund (RCIF) and the People’s Government of Heilongjiang Province agreed to launch a $2 billion fund targeting investment in agricultural projects in both countries. The share of Chinese investment in Russia may soon reach 20 percent and amount to 40 percent in the medium to long-term, according to the CEO of RDIF Kirill Dmitriev.
RT

One thought on “Russia & China Friendship, Threat to EU Market”