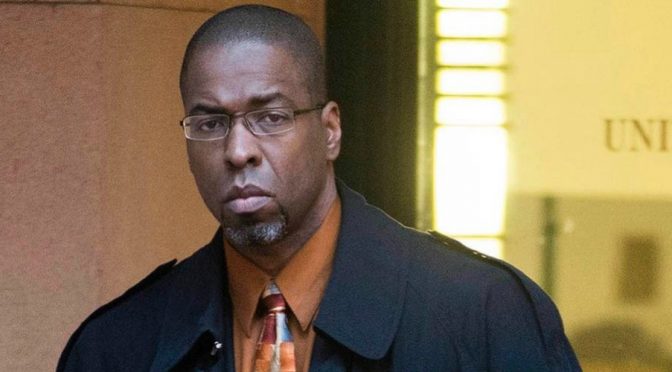 By Lauren McCauley, staff writer
A federal court in Alexandria, Virginia sentenced former CIA officer Jeffrey Sterling to three and a half years in prison on Monday in a case that has received widespread condemnation for revealing the “rank hypocrisy” of the U.S. government’s war on whistleblowers.
In January, a jury convicted Sterling of violating the Espionage Act and leaking classified information to New York Times journalist James Risen about a botched CIA mission to provide flawed nuclear plans to Iran, known as “Operation Merlin.” He was found guilty of nine charges against him and faced as many as 24 years behind bars.
Risen refused to testify against Sterling and many say that the former intelligence official was convicted merely on circumstantial evidence.
Ahead of the sentencing, Sterling’s attorneys asked U.S. District Judge Leonie Brinkema to reconsider the proposed terms, arguing that former CIA director and retired general David Petraeus was given a plea deal and shown great leniency despite comparable charges. In March, Petraeus was handed a $40,000 fine and two years probation for leaking troves of classified material to his mistress and biographer Paula Broadwell.
“[Sterling] should be treated similarly to others convicted for the same crimes and not singled out for a long prison sentence because he elected to exercise his right to trial,” Sterling’s lawyers stated in a pre-sentencing memorandum, noting that Sterling had taken his case to a jury rather than reaching a pre-trial plea bargain with prosecutors. “[T]he court cannot turn a blind eye to the positions the government has taken in similar cases.”
Following the announcement on Monday, advocates held that even the lesser sentence revealed the inequalities of the U.S. justice system with dangerous implications for government accountability. Further, the conviction marks the longest sentence delivered to a convicted leaker in a civilian court during Obama’s tenure.
“Sterling is the latest casualty in the administration’s war on national security whistleblowers,” said attorney Jesselyn Radack, who serves as the national security and human rights director for the Government Accountability Project. “Like the other whistleblowers prosecuted under the Espionage Act, Sterling is guilty of embarrassing the government. This case lays bare the government’s rank hypocrisy in the prosecution of leaks. If you’re loyal to the truth rather than the national security establishment you’ll be bludgeoned.”
In an emailed statement from the Alexandria courthouse, Norman Solomon, coordinator of whistleblower advocacy organization ExposeFacts.org and executive director of the Institute for Public Accuracy, told Common Dreams: “The only fair trial would have been no trial at all. The only fair sentence would have been no sentence at all. Whistleblowing is a public service, and the government’s continuing efforts to criminalize that public service is a double-barreled assault on both journalism and the democracy that it vitally seeks to nurture.”
Prior to revealing his concerns about the covert CIA operation, Sterling, a black man, had filed a discrimination lawsuit against the agency. Supporters say he was unfairly targeted because of those claims.
ExposeFacts.org has compiled a history of information about Sterling’s trial.
Meanwhile, his supporters have initiated a fundraiser for the Sterling family, which has been forced to depend solely on the income of Sterling’s social worker wife after he lost his job.
Following the sentencing, supporters and transparency advocates shared their reactions on Twitter.

CommonDreams
https://www.youtube.com/watch?v=g8n1QF12C_8
One of the significant sources of funds for the Nazionist Khazarian Mafia is the healthcare industry which registered a whopping $3.09 trillion in 2014, and is projected to soar to $3.57 trillion in 2017, in the US alone. We believe that this is just a conservative figure.
We can avoid using drugs, defeat any viral attack and scaremongering easily by knowing how to build our own comprehensive antiviral system. Find more about it here.

One thought on “'Guilty of Embarrassing Government': CIA Whistleblower Gets 42-Month Sentence”