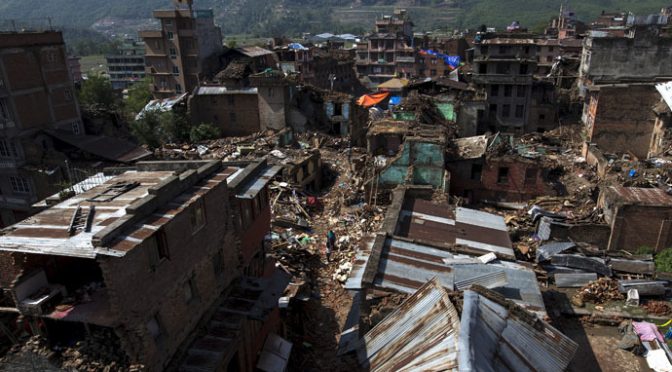 What are the odds? Still not HAARP?
Another deadly earthquake has just hit Nepal one more time.

A 7.3-magnitude quake has rocked Nepal, followed by two major aftershocks. At least 37 people have been killed in the country and over 1,000 injured. It comes weeks after a disastrous quake left over 8,000 people dead, affecting millions.
Sixteen others were killed in Indiaafter rooftops or walls collapsed onto them,according to the country’s Home Ministry.Chinese media reported one death in Tibet.
The quake hit near the town of Namche Bazaar, close to Mt. Everest.It was originally given a magnitude of 7.4 by the US Geological Survey (USGS), but was later downgraded to 7.3.

Hundreds of people running of out of Kathmandu airport. Scary shaking from aftershock #NepalQuake pic.twitter.com/XiIdB0BCCS

NEPAL – Patients are carried out of a hospital building as a new earthquake hits the country.By @PrakashMathema #AFP pic.twitter.com/hCMS8zQycw

“This is a really big one,”Prakash Shilpakar, the owner of a handicrafts shop in Kathmandu, told Reuters.Shilpakar was trying to call his parents in the town of Bhaktapur, which was destroyed in the devastating April earthquake.
Rescue helicopters have been sent to mountain areas, where landslides and collapsed buildings may have buried people, the Nepalese government said. TheSindhupalchowk and Dolkha districts were the worst hit, according to Home Ministry officialLaxmi Dhakal.

Difficult to get across through phones. No electricity. People carrying umbrellas & chairs sitting in the open. Bhaktapur after #NepalQuake

Around eight million people in Nepal, which has a total population of 28 million, have been affected by the disaster, the UN estimated. The latest tremor struck near the base camp for Everest, and was felt across the country, including the capital, Kathmandu. Everest Base Camp was evacuated after an avalanche caused by the last quake killed 18 climbers. Mountaineers subsequently canceled this year’s Everest season.
READ MORE: Shocking moment: Avalanche ripping through Everest camp captured by climbers (VIDEO)

Shockwaves were also felt as far away as northern India and Bangladesh.
Subway services have been halted in India’s New Delhi and Calcutta following the latest quake.
Tuesday’s quake was deeper than the one in April, measuring at a depth of 18.5 kilometers (11.5 miles) versus the earlier one at 15 kilometers (9.3 miles). Shallow earthquakes tend to cause more damage.
RT