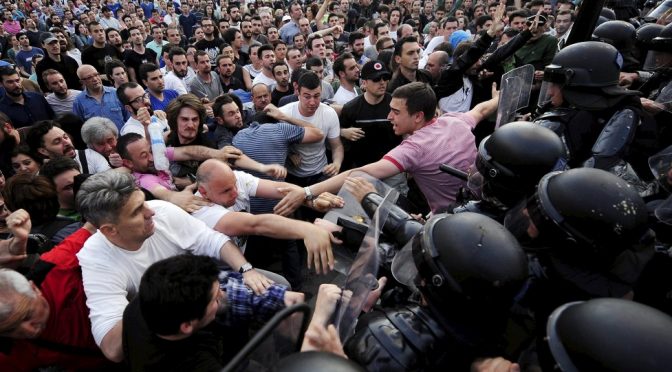 Back in June 2014, the EU demanded Bulgaria to stop construction of Russian South Stream gas pipeline project to Europe until Russia concedes to EU demands of shared ownership to which Bulgaria eventually complied with.
Putin called the bluff and halted the project in favor of what is now known as the Turkish Stream.
The Turkish Stream not only benefits the Turks but will also help Greece economically through its own installation of a gas hub from which all European natural gas needs will be sourced from.
Russia is also enticing Greece to join the New BRICS Global Bank as founding member that would eventually accelerate the disintegration of the Eurozone when Greece exits from its blood sucking tentacles.
So, what are the EU Plutocrats’ options?
Derail the Turkish Stream through a third country, beginning with Macedonia.


“Macedonia has become important to the US as it could become the only way for Russia’s proposed Turkish Stream pipeline to reach Central Europe, which Washington does not want, political analyst Srdja Trifkovic told RT.
Some thirty people have been charged with ‘terrorism’ over a deadly shoot-out in Macedonia at the weekend. A fierce battle erupted between police and an armed gang in the town of Kumanovo, in the north of Macedonia. The district is populated by ethnic Albanians who make up about a quarter of Macedonia’s population. Albanians answered with protests outside the Macedonian Embassy in Tirana, accusing Skopje of using violence instead of talking when dealing with ethnic Albanians. The Macedonian authorities say the gunmen were plotting terror acts against government institutions.
RT: What are the main reasons for the current unrest in the Balkans?
Srdja Trifkovic: It is rather tricky because the Albanians do not react the way they acted or reacted over the past three days without encouragement from the outside. We’ve seen this 14 years ago, in 2001 when the Albanians were caught in the village of Aracinovo, and there were some American fighters with them.
Macedonia or rather the Former Yugoslav Republic of Macedonia has become very important to the US recently because of Bulgaria’s refusal to accept the South Stream project. In the end the Bulgarians under EU pressure had to say “no.” And now if the Russian pipeline goes across Turkey to the Greek- Turkish border, the only way it can reach central Europe would be across Macedonia and then the old path as originally suggested through Serbia, Hungary into Austria, Slovenia, and Italy – and this is something the Americans don’t want.
I believe what we’ve seen in the recent days is a warning to the government in Skopje not to even think about hosting the new Turkish pipeline, the replacement for South Stream. I do believe that this is the political background to what is going on…
RT: The Macedonian authorities called the perpetrators of the unrest ‘terrorists’. But there are many who disagree and say they’re fighting for independence. How bad could the situation get?
ST: There is no limit with rebelling Albanians. We should bear in mind that the Skopje authorities, after the Albanian rebellion in 2001, effectively turned the country into a bi-national condominium. The Albanian party is a permanent member of the ruling coalition. One really has to wonder what else they could possibly want. This is primarily instigated from Kosovo, not from Albania, and it is in Kosovo that you have former KLA fighters [Kosovo Liberation Army] with lots of experience in staging ambushes and terrorist attacks. After all, they openly propagate the notion of a Greater Albania that will include not only Kosovo, but also Western Macedonia, and parts of the Epirus [region] in Greece and southern Montenegro.
What I believe is the limit for the escalation is the announcement by the Skopje government that there will be no Russian pipeline going across Macedonian territory from Greece into Serbia. Of course that will not be in the form of a public announcement. But I believe [that] [Nikola] Gruevski, the Macedonian Prime Minister, has been too hesitant to state pointblank that this project will not play.”
[soundcloud url=”https://api.soundcloud.com/tracks/205285158″ params=”color=00cc11″ width=”100%” height=”166″ iframe=”true” /]
RT

MOSCOW (Sputnik) — On May 9, Macedonia witnessed violent clashes between police and an armed group in Kumanovo, a city bordering Serbia and Kosovo, which claimed the lives of eight Macedonian security officers and 14 gunmen.According to the Macedonian Interior Ministry, the group was led by five former members of the Kosovo Liberation Army (KLA).

“Albanians are used to hinder [the implementation of] the Turkish Stream [project] and as a US method of putting pressure on Europe by fomenting a new conflict in the Balkans,” Dusan Prorokovic told Sputnik Tuesday.

According to Prorokovic, renewed Albanian insurgency in Kumanovo is likely to be orchestrated by the United States and its NATO allies to derail Moscow’s pipeline plans. 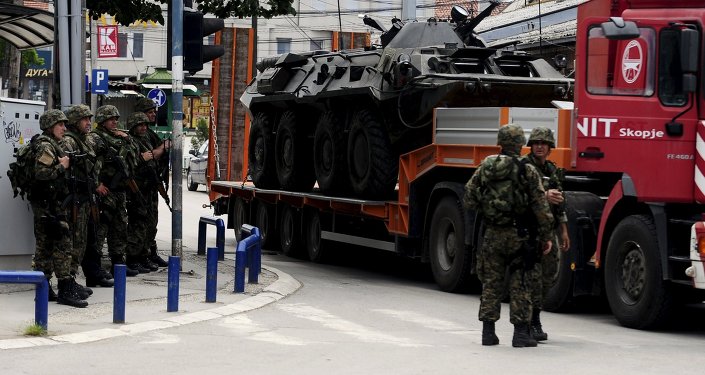 The new pipeline is expected to pass through Turkey to a gas hub on the Turkish-Greek border for further distribution to consumers in southern Europe.Kumanovo was an epicenter of fighting between Albanian rebels, who originated from Kosovo, and government forces in 2001.

In April, a group of some 40 gunmen, reportedly linked to the KLA, took over a police station in the northern Macedonian village of Gosince. The armed men called for the establishment of an Albanian state.
About a quarter of Macedonia’s two-million population is made up of ethnic Albanians. Relations between Macedonians and the Albanian minority soured after the government suppressed Albanian insurgency in Tetovo, near the border with Kosovo in 2001.
Sputnik

One thought on “NATO Sabotaging Russia's Turkish Stream through Macedonia”