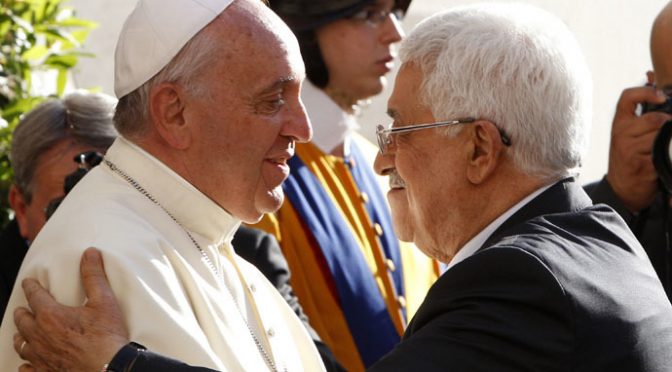 Finally, the biggest corporation on the planet, i.e. Vatican, Inc., has officially anointed the State of Palestine, another representative corporation bound by the Laws of Admiralty, the Law of the Sea, or the Uniform Commercial Code [UCC], which are all derived from earlier series of Papal Bulls.

Previously, the State of Palestine joined the International Criminal Court [ICC], the international court of the criminals, as a necessary move to be able to sue Israel for illegal settlements and outright genocide.
But empirical data suggest no tyrant has ever been hanged before unless you are not a legitimate member of the Corporatocracy.

The Vatican has become the latest country to recognize the state of Palestine, after a new treaty was finalized on Wednesday. Unsurprisingly Israel has hit out at the move, saying that it damages prospects for peace in the region.
The treaty, which was agreed, though has yet to be formally signed states the Vatican has switched its diplomatic allegiance from the Palestinian Liberation Organization to the state of Palestine. It was finalized days before the Palestinian President Mahmoud Abbas is due to visit Pope Francis.
Abbas is traveling to the Vatican to attend the canonization of four new saints by the Pope, two of which are Palestinian nuns. The move to grant them sainthood has been described as a “sign of hope” for the region by the Latin patriarch of Jerusalem, Fouad Twal, Vatican Insider reports.
The Vatican has been unofficially referring to the state of Palestine for over a year.Pope Francis visited Israel last year and the Vatican’s official program referred to Abbas as the president of the state of Palestine. During his visit to the Holy Land, he called for peace from both sides.
A spokesman for the Vatican, the Reverend Federico Lombardi confirmed the news saying: “Yes, it’s a recognition that the state exists,” AP reports.
The decision has brought condemnation from Israel, with the country’s foreign ministry saying it was “disappointed” at the move.
“This move does not promote the peace process and distances the Palestinian leadership from returning to direct and bilateral negotiations,” the ministry said in a text message, AP reported. “Israel will study the agreement and will consider its steps accordingly.”
Vatican Foreign Minister Monsignor Antoine Camilleri said the move was not politically motivated, but was simply in line with the Holy See’s position.
In 2012, the Vatican welcomed a decision by the UN General Assembly to recognize Palestine as a non-member observer state. However, the latest treaty is the first legal document between the Vatican and the state of Palestine, which can be considered as official diplomatic recognition.
The treaty in question concerns the activity of the Catholic Church in Palestine. In April 2014, a Catholic Monastery was vandalized not far from the Israeli capital of Jerusalem in a hate crime carried out by Israelis. Slogans condemning peace talks with Palestine as well as graffiti disparaging Jesus and Mary was daubed on the walls.
This is not the first time that Pope Francis has made a diplomatic decision that was not to everyone’s liking. In April, he honored the 100th anniversary of the slaughter of Armenians by Ottoman Turks and called it “the first genocide of the 20th century.”
During a mass at the Armenian Catholic rite at Peter’s Basilica, the Pope said he had a duty to honor the innocent men, women, children, priests and bishops who were murdered by the Ottoman Turks.
“Concealing or denying evil is like allowing a wound to keep bleeding without bandaging it,” said the pontiff.
RT

Palestine has formally attained membership of the International Criminal Court, a move that could open the door to possible war crime indictments against Israeli officials despite uncertainty over its wider ramifications.
The accession on Wednesday is another landmark in the Palestinian diplomatic and legal international campaign, which gained steam in 2014.
The Palestinians moved to join The Hague-based court on January 2, in a process that was finalised on Wednesday, setting the scene for potential legal action.
“Palestine has and will continue to use all legitimate tools within its means in order to defend itself against Israeli colonisation and other violations of international law,” said senior Palestinian official Saeb Erakat.
Al Jazeera’s Jonah Hull, reporting from The Hague, said despite their membership, the Palestinians may still have to wait for the ICC to begin investigating Israelis accused of war crimes.
“This is such a heavily politicised case, that the court will have to think hard before taking action against the Israelis. It may be years before we something.”
Diana Chehade, a former ICC official, told Al Jazeera, preliminary examinations could be completed by the end of this year, but the court would not investigate cases already being looked in to by other judicial institutions.
“Based on the principle of complimentarity, the ICC would not investigate if an Israeli judicial institution is investigating a war crime to ICC standards,” Chehade said.
‘ICC train left’
The ICC has long been brandished as one of the Palestinians’ doomsday measures, along with threatening to end vital West Bank security coordination with Israel.
The notion of ICC investigations is outrageous to Israel, and Netanyahu has accused the Palestinian unity government – including Hamas which the Jewish state considers “terrorist” – of “manipulating” the court.
Israel retaliated swiftly and cut off millions of dollars in monthly tax payments it collects on behalf of the Ramallah-based Palestinian Authority.
The notion of forming a Palestinian state by negotiations was buried during this month’s election campaign by Israeli Prime Minister Benjamin  Netanyahu, who pledged one would not be established on his watch, were he to retain his post as prime minister.
Netanyahu meanwhile released the held funds, which constitute two-thirds of the PA’s income, excluding foreign aid.
Some Israeli media reported that in exchange for unfreezing the money the Palestinians agreed to refrain from filing complaints to the ICC on April 1.
“It’s a huge lie. Taxes have nothing to do with our ICC approach. The ICC train already departed,” said Xavier Abu Eid, a spokesman for Palestine Liberation Organisation.
‘Absurd’ measures
April 1, however, will be primarily ceremonial, with Palestinian foreign minister Riad Malki receiving a copy of the Rome Statute, the ICC’s founding treaty.
While some Palestinian officials announced the date as the day they would file complaints against Israelis, in reality it is more likely they will wait, as state members are only able to draw the court’s attention to specific cases.
In addition, they will be holding on to see the outcomes of a preliminary probe launched by ICC prosecutor Fatou Bensouda on January 16.
At the same time that Palestinian president Mahmoud Abbas sought ICC accession, he also sent the court documents authorising the prosecutor to investigate alleged crimes that took place in Palestinian territories since June 13, 2014.
The unrest in June escalated to the summer war between Israel and Gaza fighters, which left dead 2,200 Palestinians and 73 on the Israeli side.
So far, no ICC investigation of Israeli officials has been launched and no time framework has been set for one.
But the Palestinians are confident they will happen sooner rather than later, considering “all the attention to Palestine” at the ICC.
The Palestinians reject the argument the Israeli officials cannot be tried at the ICC, because Israel is not a signatory of the Rome Statute, maintaining the court can also investigate crimes committed on the territory of member states.
“It’s absurd for the ICC to ignore international law and agreements, under which the Palestinians don’t have a state and can only get one through direct negotiations with Israel,” Netanyahu said in January following the announcement of the preliminary probe.
Among the forms of Israeli retaliation is legal assistance for victims of Palestinian attacks.
In February, a US jury found the PA and PLO responsible for six attacks which killed dozens and ordered them to pay the victims’ families more than $650 million in damages.
Source: AFP
One more proof to the Vatican’s enormous power over “free and sovereign governments” around the world.

One thought on “Palestine Becomes the Newest Corporate State”