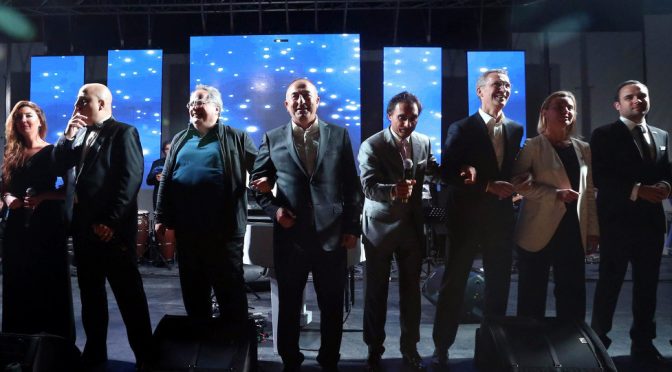 Never really thought the acting could be this bad. But the clowns are not getting funnier anymore.
The narrative is getting desperate by the day…

We need to be prepared.

Twitter Reacts to NATO Summit Singing ‘We Are the World’ 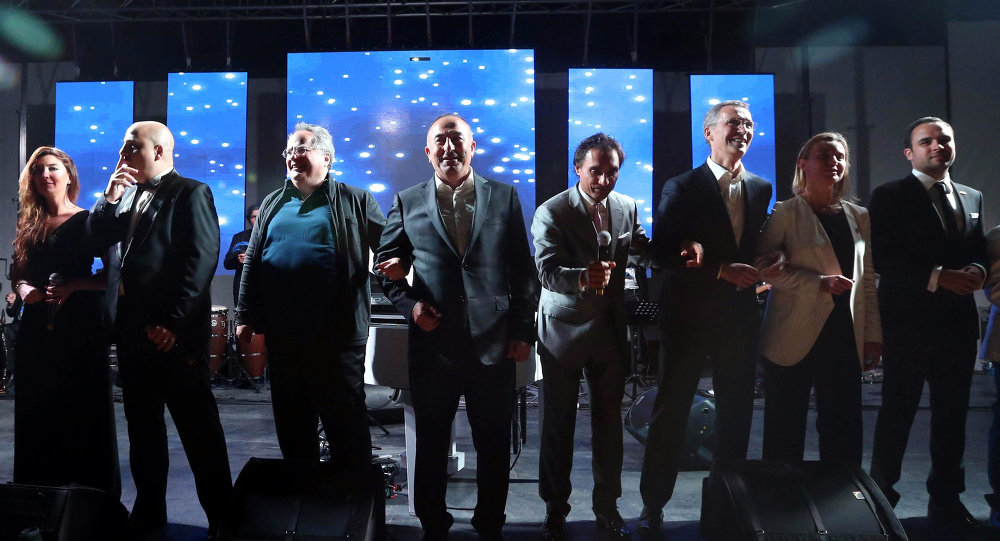 NATO foreign ministers’ rendition of the classic song “We Are the World” led Twitter users to reflect on what the alliance really means for that world.

Yes, the foreign ministers of NATO countries actually sang Michael Jackson’s song about making the world a better place during a summit in Turkey.

Watch this video of NATO leaders singing 'We are the World'… words fail me: https://t.co/pphpYvClox

As if representing a mighty neo-imperial military alliance should stop them from dreaming we'll make a better day, just you and me.

Some tried to give their own interpretation of what it could all mean:

New World lyrics: "We Are Absurd … We Are Indifferent … We Are Confused About Where The Hell It Is We're Going." https://t.co/Tc4X12ZugQ

Others thought that deep down, it already makes sense:

Explains all the warfare these days…. NATO foreign ministers sing 'We Are The World' at dinner https://t.co/AZHNeq1g0y via @YouTube

Still others thought this could mean the end of it all:

Heirs to the most powerful alliance in history renounce their patrimony | http://t.co/yJm3bqJX1O

And the AP’s diplomatic writer thought that John Kerry was just lucky enough to have skipped out on the fun:

Oh, my! I am betting #SecKerry is happy he left early and missed this… https://t.co/xygWzBU5HF

Ukrainian President Petro Poroshenko has accused Russia of increasing its military presence in his country, something Moscow firmly denies, and said that Ukraine would fight “Russian aggression” “until the last drop of blood.”

In an interview with German broadcaster ZDF, Ukrainian President Petro Poroshenko said Russia has deployed 11,000 troops in the war-torn Eastern Ukraine, adding that they can fuel separatists in the region and make them create a land bridge to the Crimean peninsula.
This claim sparked harsh reaction from Moscow, with Kremlin spokesman Dmitry Peskov saying Thursday that: “such baseless, vague and ungrounded accusations will never produce a positive result, to put it mildly.”
Poroshenko also criticized the Minsk agreement and called it a “pseudo-peace”, which does not guarantee any security for his country. At the same time, his French and German counterparts consider its implementation a key aspect for maintaining security in Europe and the best option for overcoming the current crisis.

“The Minsk provisions are what we have. They are […] fundamental to trying to find a peaceful solution. We cannot say for sure that this will be successful, but we have no choice. That is why we should continue our work in this direction,” German Chancellor Angela Merkel said earlier.

“The best way to get out of this situation is to move towards implementation of the Minsk Agreement,” echoed French President Francois Hollande.
During his interview, Poroshenko compared the current situation to World War II, with the only difference being that the threat comes not from the West, but from the East. He claimed that there are about 11,000 Russian soldiers currently present in Ukraine. “We will fight for our country to the last drop of blood,” said Poroshenko.
Ordinary Ukrainians, however, do not to support his warlike spirit. According to recent surveys, 95% of working-age men in Kiev alone are evading military service, using a variety of methods from bribery to fleeing to other countries.
Kiev has repeatedly accused Moscow of supporting separatists in Eastern Ukraine and fuelling the situation in the country, while Moscow has denied Kiev’s allegations about its involvement in the conflict.
Sputnik

Bush Vs. Bush: Jeb Tosses W. Under the Bus Over Iraq Invasion

Before even formally announcing his presidential candidacy, Jeb Bush has already faced heated controversy for claiming that he would have invaded Iraq, even with current hindsight that it was a colossal mistake. He’s since flip-flopped, and one college student has called him out, confronting Bush with an uncomfortable truth.

“Knowing what we know now, would you have authorized the invasion?” Fox News host Megyn Kelly asked presidential hopeful Jeb Bush earlier this week.
“I would have,” Bush responded, “and so would have Hillary Clinton,” he added, tossing her superfluously under the bus, as well. 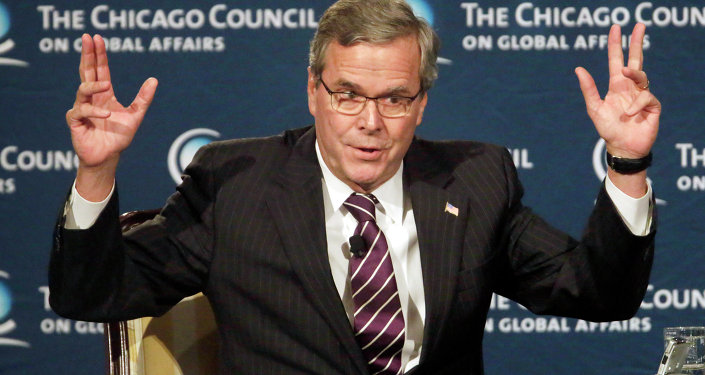 The statement has faced a wide backlash from both the left and right. The former because it proves everything voters need to know about a third Bush presidency, the latter because it provides fuel for the Democrats.
With hardly anyone – even the most right-wing hardliners – supporting Bush’s answer, he has backtracked a bit.
“I would not have gone into Iraq,” Bush said Thursday during a town hall event in Tempe, Arizona.
But even this was prefaced with the fact that Bush has a strong disliking for something every presidential candidate has to face: hypotheticals.
“Here’s the deal: If we’re all supposed to answer hypothetical questions, knowing what we know now, what would you have done, I would have not engaged.”
Jeb Bush, of course, should face hypothetical questions. By the dozens. By the thousands. Given that he has never been president before, how else can the American public learn what his decision making process would be once elected to one of the highest positions in the world?
He also seemed to have no problem with hypotheticals when the question was originally posed by Megyn Kelly. Bush didn’t skip a beat – barely even blinked – before nodding in the affirmative.
Many have been left unimpressed by Bush’s explanation, not least of which is Ivy Ziedrich, a 19-year-old student at the University of Nevada. At the end of one of the presidential hopeful’s town hall meetings, Zeidrich hit him with something unexpected.

“Your brother created ISIS,” she said, referring to the self-proclaimed Islamic State terrorist group.
“It was when 30,000 individuals who were part of the Iraqi military were forced out – they had no employment, they had no income, and they were left with access to all of the same arms and weapons,” Ziedrich told him.
Bush, who we already know is not the biggest fan of hypotheticals, asked her if she had a question.
“My question is why are you saying that ISIS was created by us not having a presence in the Middle East when it’s pointless wars, when we sent young men to die for the idea of American exceptionalism?”
“It’s this idea,” she added. “Like, why are you spouting nationalistic rhetoric to get us involved in more wars?”

© Flickr/ The World Affairs Council of Philadelphia
Jeb Bush is Hispanic? Voter Card Could Cause Problems for 2016 Presidential Candidate
.

A flabbergasted Jeb said that he “respectfully disagreed” with Ziedrich’s assessment of the Iraq War, and went on to blame the terrorist group’s formation on President Obama’s decision to withdraw troops from Iraq.
“And we had an agreement that the president could have signed that would have kept 10,000 troops, less than we have in Korea, could have created the stability that would have allowed for Iraq to progress. The result was the opposite occurred. Immediately that void was filled.”
So, before officially declaring his bid, we now know that a Jeb Bush presidency would jump into a foreign conflict based on faulty intelligence, and would then continue to bolster that mistake with a military presence significantly longer than the eight years US troops remained in Iraq.
Jeb Bush, 2016, everyone.
Sputnik
Both Chinese and Russian naval personnel are still having a good laugh they need to postpone their live fire exercises in the Mediterranean.