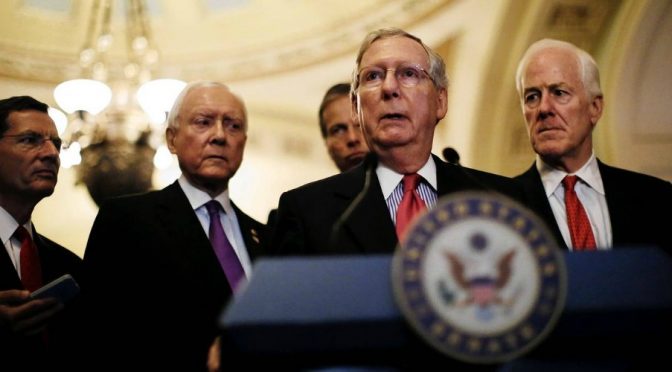 Another proof that politicians dearly called as public servants are not really serving you, the public, but only the Corporate Interests of Big Business.

‘By voting away their authority to set trade negotiating objectives, the majority of our Senators chose corporate polluters over the American people,’ says Friends of the Earth
by Deirdre Fulton, staff writer

Progressives reacted with dismay as the U.S. Senate on Thursday approved a motion to begin debate on the Fast Track authority President Barack Obama needs to advance controversial trade deals like the Trans-Pacific Partnership (TPP). The measure passed 65-33.
Senate Democrats blocked the first attempt to proceed on the trade legislation on Tuesday, but backtracked in the wake of further negotiations—and intense pressure from the White House.
The 13 Democrats who voted with big business and the Republicans Thursday are:  Michael Bennet (D-CO), Maria Cantwell (D-WA), Tom Carper (D-DE), Chris Coons (D-DE), Dianne Feinstein (D-CA), Heidi Heitkamp (D-ND), Tim Kaine (D-VA), Claire McCaskill (D-MO), Patty Murray (D-WA), Bill Nelson (D-FL), Jeanne Shaheen (D-NH), Mark Warner (D-VA) and Ron Wyden (D-OR). The full Senate roll call is here.
With Thursday’s vote, Fast Track has cleared a major procedural hurdle.
Now, according to The Hill, “[t]he chamber is expected to vote on amendments to the package Tuesday, a process that could extend into June depending on how many proposals Democrats want to consider on the floor.”
However, Senate Majority Leader Mitch McConnell (R-Ky.) reportedly wants to pass the bill before Memorial Day with a large bipartisan majority to give it maximum political momentum heading to the House, where the opponents of the TPP hold more influence.
Regarding that opposition in the House, the Huffington Post reported Thursday:

Obama and Senate Majority Leader Mitch McConnell (R-Ky.) have been able to count on broad and deep support for the trade agenda, which is less about trade and more about smoothing out regulations to benefit multinational corporations. House Speaker John Boehner (R-Ohio) doesn’t have that same luxury when it comes to granting so-called fast-track authority to Obama.
People close to House leadership say Boehner expects to lose, at this point, roughly 50 Republican votes. Lobbyists and staffers on both sides of the issue said they think such a count is highly optimistic, and that House Republicans realistically have around 140 “yes” votes.
House Republicans start with 245 members and, thanks to two vacant seats, need 217 votes for a majority. Lobbyists and House staffers don’t expect more than 20 Democrats to join with Republicans — the number is said to be at 17 as of now — which would put the tally just shy of the number needed, giving Boehner and Obama a fighting chance to get over the top. But if the GOP is indeed only in the 140s and needs to flip 50 undecided or “no” votes between now and the time of the vote, the challenge is a daunting one. Even getting to 170 would leave trade-bill backers well short.

Many have said that approving Fast Track is akin to rubber-stamping the corporate-friendly TPP. With that in mind, environmental, public health, and digital rights groups criticized Thursday’s Senate vote.
“By voting away their authority to set trade negotiating objectives, the majority of our Senators chose corporate polluters over the American people,” said Friends of the Earth climate and energy program director Benjamin Schreiber. “These trade deals would harm the environment, allow corporations to roll back government laws on fossil fuel exports and impede future action by Congress to protect the planet from climate disruption. A vote for Fast Track is a vote for climate disaster and an attack on our clean air and water.”
In a floor speech delivered before the vote on Thursday, Sen. Bernie Sanders (I-Vt.)—who voted against the Fast Track measure on Thursday—warned the TPP “would follow in the footsteps of other disastrous trade pacts.”
In a press release, Sanders pointed out that the agreement between the U.S. and 11 other Pacific Rim countries is backed by multi-national corporations, Wall Street, and the pharmaceutical industry—”all of which have shown contempt for American working families.”
Virtually every major trade union and leading environmental and religious groups are opposed, he noted, asking: “Who should the American people trust, greedy corporations or those leading the fight for jobs, the environment and moral values?”
CommonDreams
One of the significant sources of funds for the Nazionist Khazarian Mafia is the healthcare industry which registered a whopping $3.09 trillion in 2014, and is projected to soar to $3.57 trillion in 2017, in the US alone. We believe that this is just a conservative figure.
We can avoid using drugs, defeat any viral attack and scaremongering easily by knowing how to build our own comprehensive antiviral system. Find more about it here.