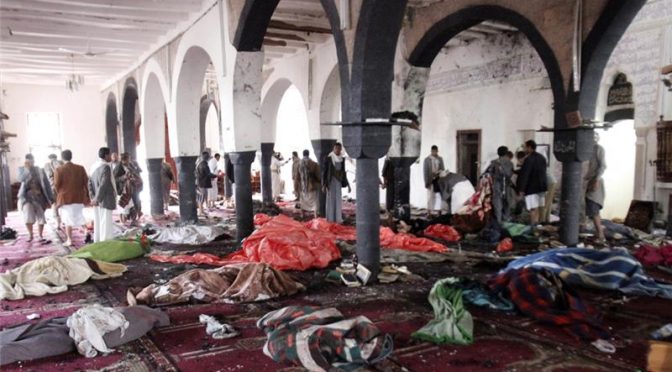 Saudi Arabia, with its huge cache of petrodollars, is the Central Bank of international terror networks. Intelligence agencies working on terrorism worldwide have almost always seen the hands of the House of Saud in every bombing and false flag operations.

While it shoulders the financial aspect of the “new world disorder”, its twin evil in the region, Israel, takes care of the overall operations. That was the norm until Netanyahu is subjected to international pressure for last year’s Operation Protective Age costing 2,200 Palestinian lives, mostly non-combatants, and the demoralization of Israeli soldiers themselves.
Now, Saudi Arabia has to do it by itself.

The Evil within: The truth we dare not see about Saudi Arabia’s war in Yemen

.
On the 70th anniversary of the fall of Nazi Germany, fascism is far from dead. As Yemen bleeds under Saudi Arabia’s grand war, it is really the annihilation of one people we are seeing play out – the Zaidis of Yemen.
If Saudi Arabia, a regional super-power strong with its trillions of petrodollars, has ruled unchallenged over the Middle East and to an extent over the Islamic world, it has done so at the expense of people’s freedom and prosperity. Yemen, more than any other country in the region has suffered under its powerful and rich tyrant of a neighbor.
Coerced into assuming the role of a passive vassal, Yemen was prevented from rising to its true potential through a clever network of bribery, religious sponsoring and social engineering. Ever since this poorest nation of South Arabia attempted to break away from the shackles of tyranny back in 1962, Riyadh has preyed on Yemen, sabotaging and manipulating, invading its lands and eroding its institutions, all to the tune of a disruptive and perverse game of tribalism with sectarian undertones.
The overlord of Arabia, the Kingdom is responsible for much, if not all of the unrest we have seen play out in the region.
But back to Yemen!
Yemen has always been a thorn in Al Saud’s thigh, a threat to its hegemonic ambitions.
As professed by Ibn Saud (the patriarch of the house of Saud) all those decades ago – left unchecked Yemen would spell the end of Saudi Arabia as the region’s hegemon. One might argue that this one warning actually shaped Riyadh’s policy towards Yemen, feeding its paranoia over this most unruly and now poorest nation in the peninsula.

Reading about beautiful Al-Hadi Mosque in #Saada #Yemen built in 9th century. Struggling to grasp that it was bombed. pic.twitter.com/5x5qSL3CQd

Ravaged by pandemic corruption, insecurity, political instability, social injustices and an over-bearing, ever-spreading sense of despair, Yemen has become but a shell of its former self, an institutional husk with no social cohesion left to hold it together.
But if Yemen has become what it is today, it is by Saudi design. Yemen’s demise, its very unraveling has been engineered by Saudi Arabia ever since 1994 when then-King Fahd bin Abdulaziz propped a loose coalition of tribes and Sunni radical factions to act as a counter-power to then-President Ali Abdullah Saleh, in exchange for military back up against Al Hirak – the Southern Secessionist Movement. For the sake of territorial unity President Saleh delivered Yemen’s future to the rapacious hands of the Kingdom, not realizing just how much this alliance would cost him in the end.
And so Al Islah – which acts as an umbrella for the now infamous Muslim Brotherhood – was born to act as Riyadh’s proxy in Sana’a.
This one party would serve as a catalyst, a protective shield and a nurturing hand for Wahhabis and Salafis alike, which religious movements we know now have inspired terror groups such as Al-Qaeda and ISIS.
But if Saudi Arabia has played a role in the crumbling of Yemen from afar, a dark cloud above the once clear sky of Felix Arabia, March 25, 2015 shattered whatever restraint Riyadh could master. Faced with an increasingly politically independent Yemen, Riyadh chose to intervene before the Houthis could actually manifest a grand political and tribal coalition and fulfill Yemenis’ calls for fairer political representation.
At the risk of upsetting the Western media narrative and Saudi Arabia’ self-proclaimed intentions in Yemen, democracy and constitutional legitimacy were never part of Riyadh’s equation, more worldly ambitions have animated Al Saud royals: natural resources and geopolitics figuring high on the list.
But that is not all – ideology, rather, clashing religious ideology has played a trigger to this Saudi-led war against Yemen, and there lies an evil which the world has yet to wake up to.

More than a month into this unilateral and grand military intervention on Yemen and it appears clear that Saudi Arabia has singled out not just the Houthis as its target of choice but the entire Yemeni Zaidi community.
Because of their rejection of Wahhabism, the Yemen Zaidi community has been labeled as “apostate” by all Salafi and Wahhabi clerics; a religious aberration to be dealt with by annihilation. Back in 2009 during a live TV interview with BBC Arabic, Adel Al Kalbani, the Imam of Mecca professed his hatred of all Shia Muslims when he called for their hunting down and death. More recently, in April 2013, Saad Al Durihim, a Saudi cleric, posted a series of comments on Twitter in which he advocated that militias in Iraq demonstrate a more “heavy handed” approach when dealing with Shia Muslims and kill any Shias they might encounter – women, men and children. Such statements are the expression of Saudi Arabia’s strict theocratic reactionary regime.
It needs to be pointed out that Saudi Arabia’s official line vis-a-vis Shia Islam echoes that of both Al- Qaeda and ISIS, which groups, Stephen Lendman, a prominent US political analyst and writer has said are but the offshoots of the Kingdom’s religious fascist construct.
But if Saudi Arabia’s religious “policy” has failed to raise even an eyebrow in Western capitals, it has become increasingly difficult to ignore the ongoing cultural and religious genocide which is taking place in Yemen.
For weeks now Saudi Arabia has pounded Sa’ada and several neighboring regions, oblivious to civilians’ safety in its desire to lay flat Zaidi Islam.
One might argue that Riyadh is actually specifically targeting civilians. Why else would the Kingdom have resorted to using cluster bombs in heavily populated areas, especially when studies have established that such weapons stand a lethal threat to civilians? According to handicap international 27 percent of all recorded cluster bombs victims are children.
Activists in Yemen, among which Hussain Al Bukhaiti, have also accused Riyadh of using chemical agents such as chlorine and white phosphorus in Sa’ada, Haja and even the capital Sana’a.
Following an attack on Saudi soil by the Houthis earlier last week, Saudi coalition spokesman Brig-Gen Ahmed Al Asiri warned Riyadh’s revenge would be swift and radical. And indeed it was – hundreds of thousands of civilians were put in harm’s way, trapped in Sa’ada, under relentless bombing. For 24 hours Saudi Arabia would rain bombs on this one “Zaidi” region of Yemen, unchallenged and unquestioned, cloaked by Western powers’ deafening silence.

#Saudi and #ISIS has same ideologies,cos they came frm same source Destroying shrines,mosque&heritage site is a must! pic.twitter.com/zB7ZA8swCS

But if civilian casualties are often the first victims of war what about cultural genocide? How can any nation ever justify the destruction of historical and religious landmarks? On May 8, Saudi Arabia reduced late Sheikh Hussein Badreddin Al Houthi’s shrine to rubble. A few days after that, another sacred Yemeni monument was destroyed – Al Hadi Mosque, the third mosque to have been built in Yemen over a thousand years ago. If not hate what could justify such actions?
If the world came together to decry ISIS’ rampage against Iraq and Syria heritage, why stay silent over Saudi Arabia’s crimes? Or is it that money white-washes war crimes these days?
On the 70th anniversary of the fall of fascism the US and the EU might want to open their eyes to their allies’ intrinsic nature.
Catherine Shakdam for RT.
Catherine Shakdam is a political analyst and commentator for the Middle East with a special emphasis on Yemen and radical movements.
A consultant with Anderson Consulting and leading analyst for the Beirut Center for Middle East Studies, her writings have appeared in MintPress, Foreign Policy Journal, Open-Democracy, the Guardian, the Middle East Monitor, Middle East Eye and many others.In 2015 her research and analysis on Yemen was used by the UN Security Council in a situation report.
RT
One of the significant sources of funds for the Nazionist Khazarian Mafia is the healthcare industry which registered a whopping $3.09 trillion in 2014, and is projected to soar to $3.57 trillion in 2017, in the US alone. We believe that this is just a conservative figure.
We can avoid using drugs, defeat any viral attack and scaremongering easily by knowing how to build our own comprehensive antiviral system. Find more about it here.