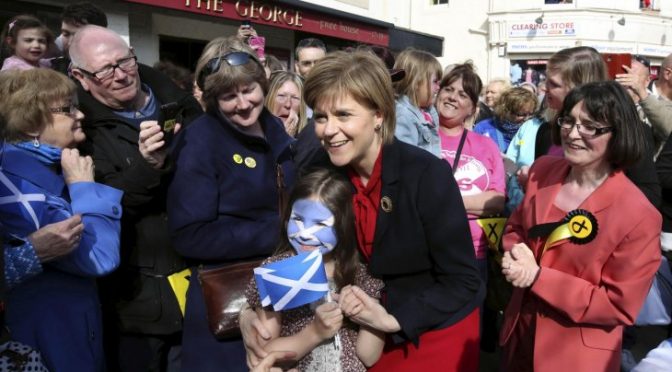 What has history said of eminence without honor, wealth without wisdom, power and possessions without principle? The answer is reiterated in the overthrow of the mightiest empires of ancient times. Babylon, Persia, Greece, Rome! The four successive, universal powers of the past. What and where are they?

Empires won by conquest have always fallen either by revolt within or by defeat by a rival.


The political realization for an Independent Scotland is inching significantly with the Scottish National Pary gaining 95% of allocated seats in the UK Parliament.

Scotland has voted strongly against the established Westminster parties, with the Scottish National Party (SNP) scoring a comprehensive victory north of the border, as the party is set to take all but three of the 59 seats in Scotland, in a dramatic improvement from their previous general election showing when they won just six seats.

Less than a year after the SNP tried and failed to break Scotland from the rest of the Britain in the independence referendum in September, it has galvanized an unprecedented surge in support to become the UK’s third biggest party in what leader Nicola Sturgeon has dubbed “a historic shift” in UK politics. “All of the indications are that this is going to be a very, very good night for the SNP,” Sturgeon added as reports of SNP wins began flooding in.

Among the biggest Westminster casualties so far are Scottish Labour leader Jim Murphy and shadow foreign secretary Douglas Alexander, while Liberal Democrat cabinet minister Danny Alexander and Charles Kennedy are also expected to be toppled by the SNP.

Let It Bleed: Farewell to the United Kingdom