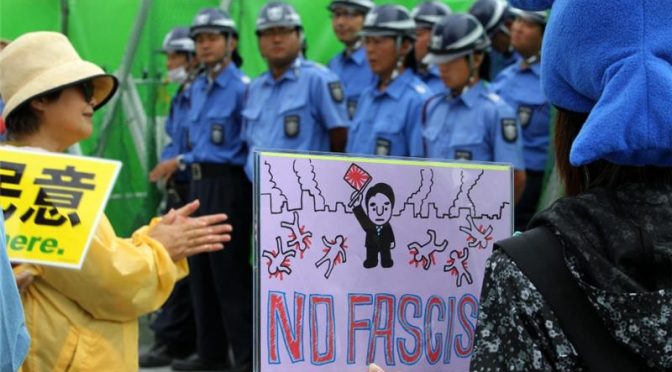 Thousands of people have protested in Okinawa against a controversial US marine airbase in the southern Japanese island, as a two-decade-long row over the relocation of the site deepens.

The massive demonstrations on Sunday aimed to pressure Tokyo to halt building work for the military base that has continued despite vehement opposition from the local government in Okinawa.
Okinawa is home to more than half of the 47,000 US service personnel stationed in Japan as part of a defence alliance, a proportion many of the island’s residents say is too high.
Washington announced plans to move the Futenma airbase in 1996, hoping to ease tensions with the host community after the gang-rape of a schoolgirl by servicemen.
But locals have pushed to block the relocation of the base within the island, insisting the facility should be fully removed instead. The demonstrations have soured relations between Tokyo and Okinawa – a once independent kingdom that was annexed by Japan in the 19th century.
“The government says we are to blame that the issue has stalled for 19 years and they tell us to find an alternative place [for the base relocation]. That is outrageous,” shouted the anti-US base mayor of the Okinawa city of Nago, Susumu Inamine.

‘Thrusting responsibility’
“The government is thrusting their responsibility on us,” Inamine told a packed 15,000-seat baseball stadium.
Organisers estimated that about 35,000 people also turned up for a rally in Naha, Okinawa’s capital.
Prime Minister Shinzo Abe last month insisted the current re-location plan was “the only solution,” while anti-base Okinawa governor Takeshi Onaga hit back saying that three recent popular votes in Okinawa all showed overwhelming opposition to the move.
The construction of the base has continued despite persistent opposition from Onaga, who has the constitutional right to reject the project under the country’s environmental laws.
“It’s difficult to dispel concerns that our fisheries’ regulations are being violated,” Onaga said at a press conference in March, referring to alleged environmental damage of coral reefs by the construction teams.
Kiku Nakayama, a local protester, was quoted by the AFP news agency as saying: “The current government is pushing the plan. Is it really a democratic country?”
“We have to remove the risks of exposing Okinawa to war again,” she said.
While most Japanese value the protection the US alliance gives them, especially in the context of Beijing’s growing regional assertiveness, a sizable proportion of Okinawans want a dramatic reduction in their numbers.
Source: Al Jazeera and agencies