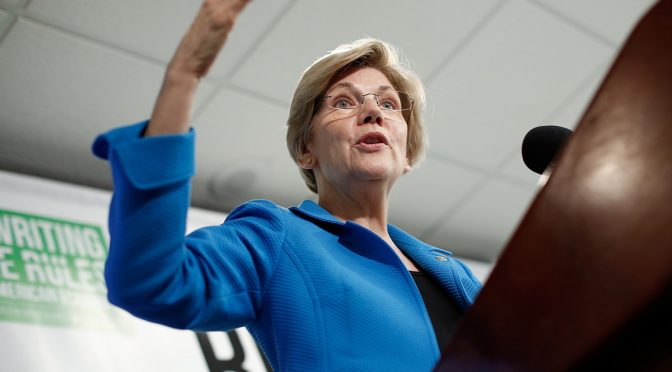 Here’s the actual secure room where US representatives are able to read the 1,000+ page draft of the dreaded Trans Pacific Partnership… 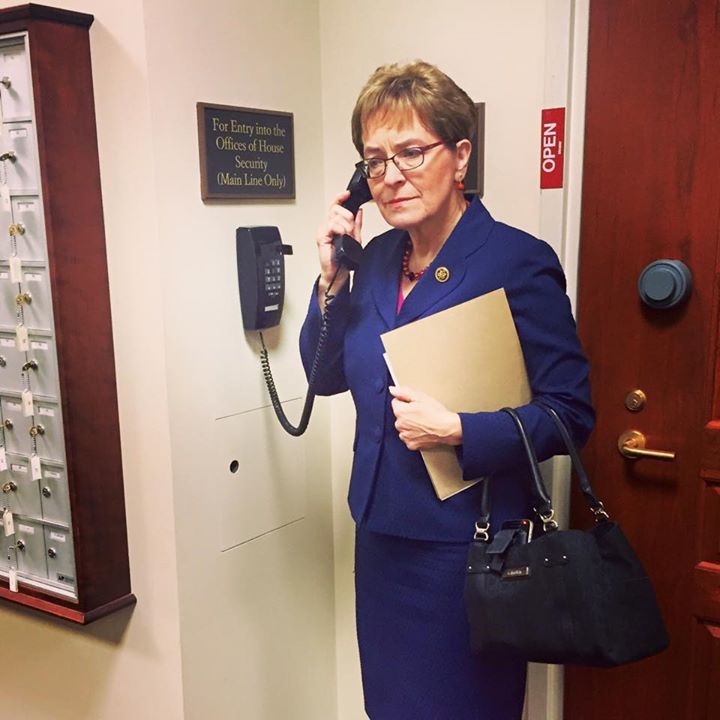 Representative Marcy Kaptur
Rep. Kaptur calls into the secure room in the basement of the U.S. Capitol where Members of Congress are allowed to read the nearly 1000 page Trans-Pacific Partnership draft agreement. She had to leave her cell phone in the lockers on the left and was not allowed to take away any notes, photos, or copies. She is not allowed to talk about what she read with anyone unless they have Top Secret clearance.

“You need to tell me what’s wrong with this trade agreement, not one that was passed 25 years ago,” a frustrated President Barack Obama recently complained about criticisms of the Trans Pacific Partnership (TPP). He’s right. The public criticisms of the TPP have been vague. That’s by design—anyone who has read the text of the agreement could be jailed for disclosing its contents. I’ve actually read the TPP text provided to the government’s own advisors, and I’ve given the president an earful about how this trade deal will damage this nation. But I can’t share my criticisms with you.
I can tell you that Elizabeth Warren is right about her criticism of the trade deal. We should be very concerned about what’s hidden in this trade deal—and particularly how the Obama administration is keeping information secret even from those of us who are supposed to provide advice.
So-called “cleared advisors” like me are prohibited from sharing publicly the criticisms we’ve lodged about specific proposals and approaches. The government has created a perfect Catch 22: The law prohibits us from talking about the specifics of what we’ve seen, allowing the president to criticize us for not being specific. Instead of simply admitting that he disagrees with me—and with many other cleared advisors—about the merits of the TPP, the president instead pretends that our specific, pointed criticisms don’t exist.

What I can tell you is that the administration is being unfair to those who are raising proper questions about the harms the TPP would do. To the administration, everyone who questions their approach is branded as a protectionist—or worse—dishonest. They broadly criticize organized labor, despite the fact that unions have been the primary force in America pushing for strong rules to promote opportunity and jobs. And they dismiss individuals like me who believe that, first and foremost, a trade agreement should promote the interests of domestic producers and their employees.
I’ve been deeply involved in trade policy for almost four decades. For 21 years, I worked for former Democratic Leader Richard Gephardt and handled all trade policy issues including “fast track,” the North American Free Trade Agreement and the World Trade Organization’s Uruguay Round, which is the largest trade agreement in history. I am also a consultant to various domestic producers and the United Steelworkers union, for whom I serve as a cleared advisor on two trade advisory committees. To top it off, I was a publicly acknowledged advisor to the Obama campaign in 2008.
Obama may no longer be listening to my advice, but Hillary Clinton and Elizabeth Warren might as well be. Warren, of course, has been perhaps the deal’s most vocal critic, but even the more cautious Clinton has raised the right questions on what a good TPP would look like. Her spokesman, Nick Merrill, said: “She will be watching closely to see what is being done to crack down on currency manipulation, improve labor rights, protect the environment and health, promote transparency and open new opportunities for our small businesses to export overseas. As she warned in her book Hard Choices, we shouldn’t be giving special rights to corporations at the expense of workers and consumers.”
On this count, the current TPP doesn’t measure up. And nothing being considered by Congress right now would ensure that the TPP meets the goal of promoting domestic production and job creation.
The text of the TPP, like all trade deals, is a closely guarded secret. That fact makes a genuine public debate impossible and should make robust debate behind closed doors all the more essential. But the ability of TPP critics like me to point out the deal’s many failings is limited by the government’s surprising and unprecedented refusal to make revisions to the language in the TPP fully available to cleared advisors.
Bill Clinton didn’t operate like this. During the debate on NAFTA, as a cleared advisor for the Democratic leadership, I had a copy of the entire text in a safe next to my desk and regularly was briefed on the specifics of the negotiations, including counterproposals made by Mexico and Canada. During the TPP negotiations, the  United States Trade Representative (USTR) has never shared proposals being advanced by other TPP partners. Today’s consultations are, in many ways, much more restrictive than those under past administrations.
All advisors, and any liaisons, are required to have security clearances, which entail extensive paperwork and background investigations, before they are able to review text and participate in briefings. But, despite clearances, and a statutory duty to provide advice, advisors do not have access to all the materials that a reasonable person would need to do the job. The negotiators provide us with “proposals” but those are merely initial proposals to trading partners. We are not allowed to see counter-proposals from our trading partners. Often, advisors are provided with updates indicating that the final text will balance all appropriate stakeholder interests but we frequently receive few additional details beyond that flimsy assurance.
Those details have enormous repercussions. For instance, rules of origin specify how much of a product must originate within the TPP countries for the resulting product to be eligible for duty-free treatment. These are complex rules that decide where a company will manufacture its products and where is will purchase raw materials. Under the North American Free Trade Agreement (NAFTA), 62.5 percent of a car needed to originate within NAFTA countries. In the US-Australia Free Trade Agreement, it was lowered to 50 percent. It further dropped to 35 percent in the US-Korea Free Trade Agreement (KORUS). In essence, under our agreement with Korea, 65 percent of a car from South Korea could be made from Chinese parts and still qualify for duty-free treatment when exported to the U.S.
That fact is politically toxic, and for that reason, we should expect the TPP agreement to have higher standards. But will it reach the 62.5 percent NAFTA requirement? Or will it be only a slight improvement over KORUS? Without access to the final text of the agreement, it’s impossible to say.
State-owned enterprises may, for the first time, be addressed in the TPP. But, once again, the details are not clear. Will exemptions be provided to countries like Vietnam, Malaysia and Singapore, all of which could be heavily impacted by such a rule? What will be the test to determine what is or is not acceptable behavior? Will injury be required to occur over a substantial period of time, or will individual acts of non-commercial, damaging trade practices be actionable? Again, it’s impossible to say for sure.
Advisors are almost flying blind on these questions and others.
Only portions of the text have been provided, to be read under the watchful eye of a USTR official. Access, up until recently, was provided on secure web sites. But the government-run website does not contain the most-up-to-date information for cleared advisors. To get that information, we have to travel to certain government facilities and sign in to read the materials. Even then, the administration determines what we can and cannot review and, often, they provide carefully edited summaries rather than the actual underlying text, which is critical to really understanding the consequences of the agreement.

Cleared advisors were created by statute to advise our nation’s trade negotiators. There is a hierarchal structure, starting with the USTR’s Advisory Committee on Trade Policy & Negotiations at the top—a committee that includes people like Steelworkers President Leo Gerard, Mastercard CEO Ajay Banga, Etsy CEO Chad Dickerson and Jill Appell, co-owner of Appell’s Pork Farms. Then there are specific Committees covering subjects like labor, the environment and agriculture that make up the next tier. The last tier consists of the Industry Trade Advisory Committees (ITACS), which focus on individual sectors such as steel and aerospace. At last count, there were more than 600 cleared advisors. The vast majority of them represent business interests.
In an effort to diminish criticism, USTR is now letting cleared advisors review summaries of what the negotiators have done. In response to a question about when the full updated text will be made available, we’ve been told, “We are working on making them available as soon as possible.” That’s not the case overseas: Our trading partners have this text, but the government’s own cleared advisors, serving on statutorily-created advisory committees, are kept in the dark.
How can we properly advise, without knowing the details?
Questions pervade virtually every chapter of the proposed agreement, including labor and the environment, investor-state, intellectual property and others. The answers to these questions affect the sourcing and investment decisions of our companies and resulting jobs for our people. Our elected representatives would be abdicating their Constitutional duty if they failed to raise questions.
Senator Warren should be commended for her courage in standing up to the President, and Secretary Clinton for raising a note of caution, and I encourage all elected officials to raise these important questions. Working Americans can’t afford more failed trade agreements and trade policies.
Congress should refuse to pass fast track trade negotiating authority until the partnership between the branches, and the trust of the American people is restored. That will require a lot of fence mending and disclosure of exactly what the TPP will do. That begins by sharing the final text of the TPP with those of us who won’t simply rubber-stamp it.

–
One of the significant sources of funds for the Fascistic Nazionist Khazarian Mafia is the healthcare industry which registered a whopping $3.09 trillion in 2014, and is projected to soar to $3.57 trillion in 2017, in the US alone. We believe that this is just a conservative figure.
We can avoid using drugs, defeat any viral attack and scaremongering easily by knowing how to build our own comprehensive antiviral system. Find more about it here.