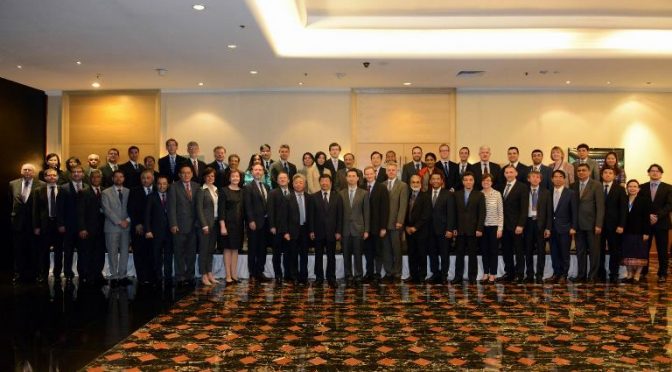 The $100 billion Asian Infrastructure Investment Bank’s 5th Chief Negotiators’ meeting has ended in Singapore on Friday.
Delegates and representatives from 57 countries which had joined the China-led Bank as founding members have discussed stake-holding, draft of articles and shares in the newly found lender.

China’s Ministry of Finance said on Friday the negotiators have reached agreement on the bank’s charter.
Preparation for establishment of the AIIB are gaining momentum as a succession of intensive talks are on the horizon.
With the signing of a charter slated for the end of June, the AIIB looks set to be launched by the end of the year.

AIIB on Wednesday held a three-day closed-door meeting in Singapore, co-chaired by China’s vice Minister of Finance Shi Yaobin and Singapore’s Deputy Secretary of the Ministry of Finance Yee Ping Yi.
A Reuters report on Friday quoted unnamed sources as saying China would hold 25-30 per cent of shares, India 10-15 per cent, Asian countries will own between 72-75 per cent of the bank’s shares.
Among the 57 AIIB founding members, 37 are Asian countries. Founding members have the right to help define the bank’s rules, including its charter, while countries considered ordinary members, those that applied to join after the deadline of March 31, hold voting rights but have less say in the rule-making process.
Washington’s closest allies, including Germany, Britain and France have defied the US to join the China-led Bank. All the five members of BRICS are founding members of the AIIB as well.
US and Japan are yet to participate in the new financial institution.
China would still welcome the United States and Japan to join the Asian Infrastructure Investment Bank (AIIB), and has kept them informed with all the relevant information, China’s Finance Minister Lou Jiwei said last month.
After talks ended on Friday, representatives of the various founding members of the AIIB will need to get the nod on the share-holding agreement from their respective governments for the Bank charter to be finalized.
The bank will feature a three-level management structure that includes a board of governors, board of directors and senior management, China’s Deputy Finance Minister Shi Yaobin said earlier.
China, with $4 trillion in foreign exchange reserves, is pushing for the growth of its own multilateral bodies, including the AIIB, the BRICS Bank and a bank for the Shanghai Cooperation Organization, but also seeking to strengthen its voice at the World Bank and the International Monetary Fund.
To reflect the growing and underrepresented influence of emerging economies, the IMF called for a 6 per cent shift in quota share to the emerging economies in 2010. However, the reform has been delayed for five years due to blocking by US Congress as the United States retains a veto.
“I can fully understand why some other countries are frustrated and impatient to see that reform implemented,” IMF chief Christine Lagarde said last month calling on the United States to ratify the quota reform plan.
TBP


The 5th Chief Negotiators’ Meeting on Establishing the Asian Infrastructure Investment Bank (AIIB) was held on May 20-22, 2015 in Singapore. The Meeting was chaired by Mr. SHI Yaobin, Vice Minister of the Chinese Ministry of Finance and Permanent Chair of the Chief Negotiators’ Meeting, and Mr. YEE Ping Yi, Deputy Secretary of the Singaporean Ministry of Finance. Representatives from 57 Prospective Founding Members of the AIIB and Mr Jin Liqun, Secretary General of the Multilateral Interim Secretariat on Establishing the AIIB, attended the Meeting.
The Meeting concluded discussions and finalized the Articles of Agreement (AOA) for the AIIB.‎ Secretary General JIN Liqun reported to the Meeting on the progress to date in setting up the AIIB. In the three day Meeting, the Chief Negotiators also discussed the draft Environmental and Social Framework and draft Procurement Policy framework, among other topics. It is expected that the AOA would be ready for signing by the end of June and the AIIB would be operational by the end of this year.
Chief Negotiators have held 5 rounds of Meetings since the Signing of Memorandum of Understanding on Establishing the AIIB in Beijing in October 2014.
AIIBank