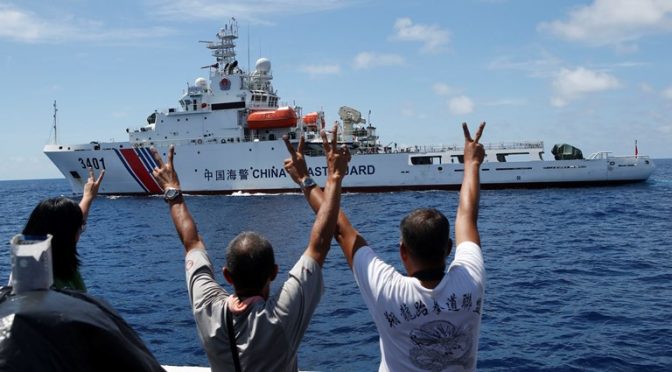 Beijing is prevailing over its neighbors in the South China Sea. It may also have the solution.

.
The U.S. rebalance to Asia has yet to alter the desired outcome for U.S. allies and partners in the South China Sea (SCS): Checking Beijing’s advances in territorial claims. Instead, despite a few successful maneuvers, most of the strategies adopted by the Philippines and Vietnam have backfired. China has seized every opportunity to advance its claims in response to its neighbors’ perceived provocations and operational incompetence. Let us consider some examples of how SCS competitors act, react, and interact in the strategic pursuit of their own self-interests.
First, the Philippine’s clumsy operation at the Scarborough Shoal during 2012 gave Beijing an opening to control this strategic reef in the northeast SCS. Manila deployed its largest naval asset, a decommissioned U.S. 1960s-era patrol cutter, to apprehend Chinese fishermen ensconced in the lagoon, pursuing them for alleged poaching. But the entrance proved too small and the water too shallow for the warship. Instead, a small boarding team proceeded inside the lagoon to make the arrest. This provided time and space for Chinese law enforcement vessels to intervene. Additionally, Manila lost on the propaganda front. The employment of a naval vessel conveyed the impression the Philippines had militarized the dispute. This allowed Beijing to score points by charging that an aggressive, bullying Philippine navy had pointed guns at hapless Chinese fishermen who simply sought refuge inside the Shoal from a storm. Moreover, China was able to exert retaliatory economic pressure – ranging from tourism to banana trade – imposing a considerable cost on Manila. In the end, to preserve bilateral relations, the Philippines had to re-appoint a retired diplomat as the new ambassador to Beijing. That is, factional infighting had left the Pacific nation without an ambassador to China for more than a year. The ensuing months-long standoff handed Beijing a comprehensive victory over Manila.
Similarly, Vietnam shot itself in the foot in 2012 by enacting a controversial maritime law formalizing its claims over the SCS. The action angered Beijing, which immediately responded by announcing – on the very same day – plans for a new Sansha City to administer the two million square kilometers of disputed “blue territories.” Beijing’s retaliation also included a military garrison on Paracels’ Woody Island, capital of the proposed Sansha, along with improved infrastructure there. It is worth noting that deliberations on this gigantic city had taken place over a fifteen-year period before it was announced in 2007; however, Vietnamese protests that year forced Beijing to shelve it. Now, Hanoi’s new law inadvertently provided cover for Beijing to ratify this contentious project, despite the fact of it being a clear violation of the 2002 Declaration of Conduct in the SCS which China signed with southeast Asian countries.
China thus prevailed against Vietnam in leveraging maritime law assertions to proclaim the new Sansha City, and against the Philippines in expanding access to the Scarborough Shoal. In fact, having lost control of the shoal, Manila decided to challenge Beijing on an international legal front. Manila sued China in the International Tribunal on the Law of the Sea over the legality of the latter’s nine-dashed line. Beijing viewed Manila’s unilateral lawsuit as provocation by a lesser military and economic power, one attempting to draw China into a legal forum against its will. China responded with massive land reclamations at its controlled reefs, aiming at completing construction before a verdict could be rendered. “The reclamation was clearly a response to the arbitration,” admitted a Philippine maritime expert. “If ever China had real plans to do this before, clearly the arbitration case accelerated those plans.”
Satellite images in late 2014 proved the impressive scale and speed of this extensive island building initiative. Before January 2014, Chinese presence in the Spratlys only comprised outposts made of concrete blockhouses perched atop seven coral atolls. 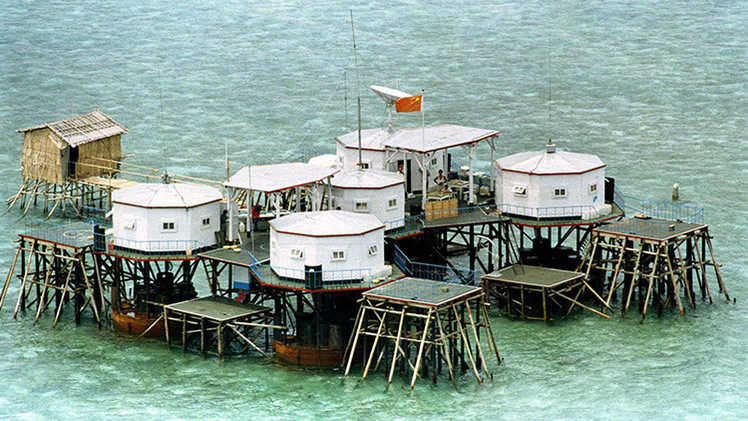 Today the size of these reef-based constructions has grown from a total area of 5 acres to about 2,000 acres, a 400-fold increase in acreage, according to a new Pentagon report. The dredger Tianjing used in manufacturing the islands was jointly designed by China and Germany. It had already been under construction during 2008, and was delivered in 2010.

Chinese President Xi Jinping has called for better people-to-people contacts between Japan and China as he welcomed a 3000-strong Japanese delegation to Beijing this weekend.
Xi, while addressing the Japanese delegation in the Great Hall of the People in Beijing on Saturday, stressed on “peaceful development” of the two Asian giants.
China-Japan trade ties had been a bright spot in a tense relationship that has been marred by anger over Japan’s approach to its wartime and colonial past, as well as friction over disputed islands. However, China’s trade with Japan plummeted by 11 per cent during the January-April period this year.
The delegation on Saturday delivered a letter from Japanese Prime Minister Shinzo Abe to Xi who stressed on “cherishing and protecting” the “friendship”. Abe and Xi held talks last month, the second time in the last five months, on the sidelines of a regional conference in Jakarta.
Xi, on Saturday, however, sent out a warning against falsifying history.
“This year marks the 70th anniversary of the victory of the Chinese People’s War of Resistance Against Japanese Aggression, as well as the World Anti-Fascist War. The crimes committed by Japanese militarism can not be concealed; historical truth can not be distorted. Chinese people and Asian victims who suffered, or any Japanese people who have a sense of justice and conscience will not tolerate any attempt to distort the history of Japanese militarist aggression,” he said.
The conflict, commonly known in China as the War of Resistance Against Japanese Aggression, led to the death of some 20 million Chinese, according to Beijing’s estimates. It ended with Tokyo’s World War II defeat in 1945.
Japan has also recently announced a reinterpretation of its pacifist constitution, by ending a ban that has kept the Japanese military from fighting abroad.
“The Japanese people were also victims of the war. Both sides should learn from history and face the future to seek peaceful development, boost friendship from generation to generation, create a better future for the development of both countries, and contribute more to peace in Asia and the world,” the Chinese President added.
The Japanese delegation is led by Toshihiro Nikai, chairman of the Liberal Democratic Party’s general council.
“The China-Japan Friendship communication conference is very important. We thank the Chinese government for its support and attention. It is very significant in maintaining people-to-people contacts and cultural exchanges, especially for mutual understanding among young people. We are willing to work with China to boost cooperation in these areas,” Toshihiro Nikai said on Saturday.
TBP and Agencies