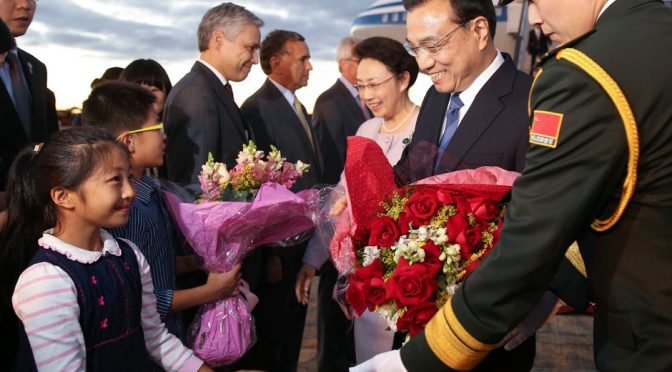 It started in April with a rash of deals between Argentina and Russia during President Cristina Kirchner’s visit to Moscow.
And it continues with a $53 billion investment bang as Chinese Premier Li Keqiang visits Brazil during the first stop of yet another South American commercial offensive – complete with a sweet metaphor: Li riding on a made in China subway train that will ply a new metro line in Rio de Janeiro ahead of the 2016 Olympics.

Where is the US in all this? Nowhere; little by little, yet inexorably, BRICS members China – and in a smaller measure, Russia – have been no less than restructuring commerce and infrastructure all across Latin America.
Countless Chinese commercial missions have been plying these shores non-stop, much as the US did between World War I and II. In a key meeting in January with Latin American business leaders, President Xi Jinping promised to channel $250 billion for infrastructure projects in the next 10 years.
Top infrastructure projects in Latin America are all being financed by Chinese capital – except the Mariel port in Cuba, whose financing comes from Brazil’s BNDES and whose operation will be managed by Singaporean port operator PSA International Pte Ltd. Construction of the Nicaragua canal – bigger, wider and deeper than Panama’s – started last year by a Hong Kong firm, to be finished by 2019. Argentina, for its part, clinched a $4.7 billion Chinese deal for the construction of two hydroelectric dams in Patagonia. Among the 35 deals clinched during Li’s visit to Brazil, there was financing worth $7 billion for Brazil’s oil giant Petrobras; 22 Brazilian Embraer commercial jets to be sold to Tianjin Airlines for $1.3 billion; and a raft of agreements involving top iron ore producer Vale. Chinese investment might go some way into overhauling Brazil’s appalling network of roads, railways and ports; airports are in slightly better condition due to upgrades prior to the World Cup last year.
The star of the whole show is undoubtedly the proposed $30 billion, 3,500 kilometer-long, Atlantic-Pacific mega-railway, that is slated to run from the Brazilian port of Santos to the Peruvian Pacific port of Ilo via Amazonia. Logistically, this is a must for Brazil, offering it a Pacific gateway. Winners will inevitably be commodity producers – from iron ore to soya beans – exporting to Asia, mostly China.
The Atlantic-Pacific railway may be an extremely complex project – involving everything from environmental and land rights issues to, crucially, the preference for Chinese firms every time Chinese banks deliberate on extending lines of credit. But this time, it’s a go. The usual suspects are – what else – worried.
Watch the Geopolitics
Official Brazilian policy, since the Lula years, has been to attract top Chinese investment. China is Brazil’s top trading partner since 2009; it used to be the US. The trend started with food production, now it moves to investment in ports and railways, and the next stage will be technology transfer. The BRICS New Development Bank and the China-led Asian Infrastructure Investment Bank (AIIB), of which Brazil is a key founding member, will definitely be part of the picture.
The problem is this massive trade/commerce BRICS interplay is intersecting with a quite convoluted political process. The top three South American powers – Brazil, Argentina and Venezuela, which also happen to be Mercosur members – have been facing repeated “destabilization” attempts by the usual suspects, who routinely denounce the foreign policy of Presidents Dilma Rousseff, Cristina Kirchner and Nicolas Maduro and yearn for the good ol’ days of a dependent relationship with Washington.
With different degrees of complexity – and internal strife – Brasilia, Buenos Aires and Caracas are all simultaneously facing plots against their institutional order. The usual suspects don’t even try to dissimulate their near total diplomatic distance from the South American Top Three.
Venezuela, under US sanctions, is considered a threat to US national security – something that does not even qualify as a bad joke. Kirchner has been under relentless diplomatic assault – not to mention US vulture funds targeting Argentina. And with Brasilia, relations are practically frozen since September 2013, when Rousseff suspended a visit to Washington in response to the NSA spying on Petrobras, and herself personally.
And that leads us to a crucial geostrategic issue – so far unresolved.
NSA spying may have leaked sensitive information on purpose to destabilize the Brazilian development agenda – which includes, in the case of Petrobras, the exploration of the largest oil deposits (the pre-salt) found so far in the young 21st century. What is unraveling is so crucial because Brazil is the second-biggest economy in the Americas (after the US); it is the biggest Latin American commercial and financial power; it hosts the former second-biggest development bank in the world, BNDES, now overtaken by the BRICS bank; and it also hosts the biggest corporation in Latin America, Petrobras, also one of the world’s top energy giants.
The hardcore pressure against Petrobras comes essentially from US shareholders – who act like the proverbial vultures, bent on bleeding the company and profit from it, allied with lobbyists who abhor Petrobras’s status as the priority explorer of the pre-salt deposits.
In a nutshell, Brazil is the last great sovereign frontier against unbounded hegemonic domination in the Americas. The Empire of Chaos had to be annoyed.
Ride the continental wave
The constantly evolving strategic partnership of the BRICS nations has been met by Washington circles not only with incredulity but fear. It’s virtually impossible for Washington to do real damage to China – but much “easier”, comparatively, in the case of Brazil or Russia. Even though Washington’s wrath targets essentially China – which has dared to do deal after deal in the former “America’s backyard”.
Once again, the Chinese strategy – as much as the Russian – is to keep calm and carry a “win-win” profile. Xi Jinping met with Maduro in January to do – what else – deals. He met with Cristina Kirchner in February to do the same – just as speculators were about to unleash another attack against the Argentine peso. Now there’s Li’s visit to South America.
Needless to say, trade between South America and China continues to boom. Argentina exports food and soya beans; Brazil the same, plus oil, minerals and timber; Colombia sells oil and minerals; Peru and Chile, copper, and iron; Venezuela sells oil; Bolivia, minerals. China exports mostly high-value-added manufactured products.
A key development to watch in the immediate future is the Transul project, which was first proposed at a BRICS conference last year in Rio. It boils down to a Brazil-China strategic alliance linking Brazilian industrial development to partial outsourcing of metals to China; as the Chinese increase their demand – they are building no less than 30 megalopolises up to 2030 – that will be met by Brazilian or Sino-Brazilian companies. Beijing has finally given its seal of approval.
So the long-term Big Picture remains inexorable; BRICS and South American nations – which converge in the Unasur (The Union of South American Nations) – are betting on a multipolar world order, and a continental process of independence.
It’s easy to see how that is oceans away from a Monroe doctrine.
Pepe Escobar is the roving correspondent for Asia Times/Hong Kong, an analyst for RT and TomDispatch, and a frequent contributor to websites and radio shows ranging from the US to East Asia.
Global Research
One of the significant sources of funds for the Fascistic Nazionist Khazarian Jesuit Mafia is the healthcare industry which registered a whopping $3.09 trillion in 2014, and is projected to soar to $3.57 trillion in 2017, in the US alone. We believe that this is just a conservative figure.
We can avoid using drugs, defeat any viral attack and scaremongering easily by knowing how to build our own comprehensive antiviral system. Find more about it here.