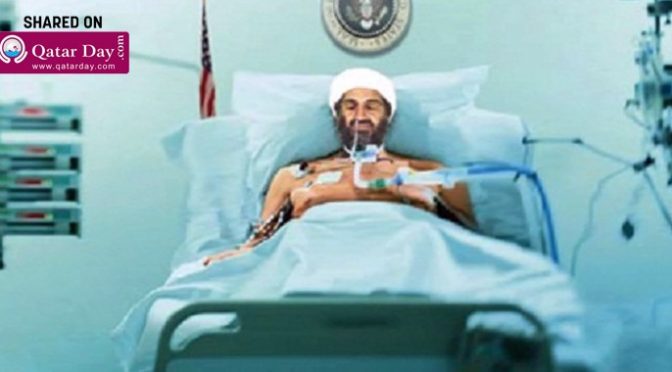 The criminals have begun cleaning their tracks this early as they are leaving the White House next year.

The files regarding the false assassination of the bogeyman Osama bin Laden is top priority, among others. The related diversion forwarded by Seymour Hersh which has been actively played out by the MSM is not working with those who already knew Osama died as early as late 2001.
With his early death, it would not be that hard for the House of Saud to give permission for the use of Osama as the bogeyman in the succeeding years of the War on Terror.
In order to give a complete background about the participation of the House of Saud and other very notable participants in the WTC 9/11 false flag, please download and read the following documents:

Who Was Killed in Abbottabad in May 2011? Osama bin Laden or Someone Else? Pentagon Ordered Purge of Osama “Death Files” from Data Bank

This article was first published in July 2013  following the Pentagon’s Decision to Purge the bin Laden “death files” from the Pentagon’s data bank. The decision was justified “to protect the names of the personnel involved in the raid, according to the inspector general’s draft report.”
The personnel involved were members of the Navy SEAL team 6 operative which undertook the bin Laden Abbottabad raids in May 2011.
In a bitter irony,  three months after Obama had officially announced that the SEAL 6 unit had killed Osama bin Laden,  22 NAVY Seal belonging to the same unit as the Navy SEALS involved in the Osama Abbotabad operation,  died mysteriously in a helicopter crash in Afghanistan:

30 Americans were killed in the crash on August 6, 2011 when insurgents shot down a U.S. military helicopter during fighting in eastern Afghanistan, making it the largest loss of life in a single incident for the U.S. military during the war. …
US military officials have maintained that none of the individuals involved directly in the Bin Laden mission were killed in the crash. However, sources have claimed that there were at least two SEALs who died on the chopper who had been involved in the Bin Laden raid. (Infowars, July 24, 2013, emphasis added)

The chronology is important: the Pentagon decided to purge the Osama “death files”, two months after the families of the victims of the helicopter crash went public in May 2013 “with concerns that the Obama administration was at least partially responsible for the deaths of their sons” (Ibid).
Erasing the names of the Navy SEAL Team 6 personnel from the Pentagon “death files”made it impossible to verify whether the Navy SEAL personnel involved in Abbottabad raid were dead or alive.
Michel Chossudovsky, May 24, 2015

A new wave of camouflage is underway at the Pentagon and the CIA.  The bin Laden “death files” contained in the Pentagon’s  data bank have become the object of controversy. Navy Vice Admiral William McRaven has been entrusted in removing these secret military files concerning the May 2011 Navy SEAL raid on Osama bin Laden’s alleged hideout in Abbottabad, Pakistan from the Pentagon’s data banks.
The files of the bin Laden SEAL operation had to be removed to sustain the Big Lie.
Osama was allegedly killed on the orders of the US government, despite ample evidence that he was already dead at the time of the attack:

… the US government pulled off one of the most audacious stunts of the 21st century, when on May 2nd 2011 they claimed to have killed Osama bin Laden during a Navy SEAL operation in Abbottabad, Pakistan. The contemptuously sloppy story spun by the US government, parroted without question by the controlled corporate media, and obligingly swallowed by a largely gullible Western public, was dubious in the extreme. (Brit Dee, Global Research, May 03, 2012)

Who was killed? Was it Osama bin Laden or someone else?
“Rest in Peace”, “‘Truth” will prevail. The files are no longer at the Pentagon, they have been sent to the CIA, in violation of the Freedom of Information Act. The White House tacitly acknowledges that the procedure of moving government records was in violation of federal norms:

A draft report by the Pentagon’s inspector-general briefly described the secret move, which was directed by the top US special operations commander, Admiral William McRaven.
The transfer did not set off alarms within the Obama administration even though it appears to have sidestepped rules governing federal records and circumvented the Freedom of Information Act.
President Barack Obama has pledged to make his administration the most transparent in US history.
The CIA said the documents were handled in a manner consistent with the fact that the operation was conducted under the CIA’s direction. (Belfast Telegraph, July 8, 2013)

The Pentagon spokesperson denied the fact that the removal of these files was to avoid the legal requirements of the Freedom of Information Act.

But secretly moving the records allowed the Pentagon to tell The Associated Press that it couldn’t find any documents inside the Defense Department that AP had requested more than two years ago, and could represent a new strategy for the U.S. government to shield even its most sensitive activities from public scrutiny. New York Daily News

According to the official statement, the record transfer from the Pentagon to the CIA has nothing to do with Freedom of Information. Its objective was “to protect the names of the personnel involved in the raid, according to the inspector general’s draft report.”
Protect whom? Several members of the SEAL raid are now dead, allegedly “due to combat and training accidents”. The list of names in the Osama death files is known to US intelligence but not to the broader public, nor to family members:

According to the New York Times, “79 commandos and a dog” were involved in the raid that killed Osama bin Laden — though other reports peg the number at approximately 24. Since the raid, SEAL Team Six — the team that conducted the Bin Laden raid — has lost several members due to combat and training accidents, though none of them have been confirmed as being specifically part of the Bin Laden raid.
The largest loss to the team took place in April of 2011 when Taliban fighters shot down a U.S. helicopter and killed 22 members of SEAL Team Six, along with 16 other U.S. troops. None of those SEALs, however, were reported to have worked on the Bin Laden raid. Separately, the BeforeItsNews piece references Cmdr. Job W. Price, who committed suicide in December of 2012, as being another person connected to the Bin Laden raid who has died. This accusation doesn’t hold up because Price was reportedly part of SEAL Team Four, not Six, and was not part of the Bin Laden raid.
The most recent death tied to SEAL Team Six took place on March 28, when Special Warfare Operator Chief Brett D. Shadle was killed in a parachute training accident when he collided in midair with another SEAL over the Arizona desert. He was later identified as being a part of Team Six, though it’s unclear if he was actually assigned to the Bin Laden mission.
The problem with completely confirming or disproving the accusation that so many SEAL Team Six members have died is that the U.S. military typically does not disclose which units special forces members work on, even after their deaths. In interviews with MSN News, spokespeople at the U.S. Navy, Pentagon and Special Operations Command (SOCOM) each refused to comment on the BeforeItsNews article or the claim that 25 members of the Bin Laden raid team have died. (MSN News, April 9, 2013)

The members of SEAL Team Six know the untold truth. And they are forbidden to reveal it.
“Many credible commentators, including respected intelligence analysts and heads of state, had claimed years before 2011 that bin Laden was dead.” (Brit Dee, op cit).
In an “authoritative” December 26, 2001, report Fox News acknowledged Osama bin Laden’s “peaceful death” in December 2001:

Usama bin Laden has died a peaceful death due to an untreated lung complication, the Pakistan Observer reported, citing a Taliban leader who allegedly attended the funeral of the Al Qaeda leader.

“The Coalition troops are engaged in a mad search operation but they would never be able to fulfill their cherished goal of getting Usama alive or dead,” the source said.

Bin Laden, according to the source, was suffering from a serious lung complication and succumbed to the disease in mid-December, in the vicinity of the Tora Bora mountains. The source claimed that bin Laden was laid to rest honorably in his last abode and his grave was made as per his Wahabi belief.

About 30 close associates of bin Laden in Al Qaeda, including his most trusted and personal bodyguards, his family members and some “Taliban friends,” attended the funeral rites. A volley of bullets was also fired to pay final tribute to the “great leader.”

The Taliban source who claims to have seen bin Laden’s face before burial said “he looked pale … but calm, relaxed and confident.”

Asked whether bin Laden had any feelings of remorse before death, the source vehemently said “no.” Instead, he said, bin Laden was proud that he succeeded in his mission of igniting awareness amongst Muslims about hegemonistic designs and conspiracies of “pagans” against Islam. Bin Laden, he said, held the view that the sacrifice of a few hundred people in Afghanistan was nothing, as those who laid their lives in creating an atmosphere of resistance will be adequately rewarded by Almighty Allah.
When asked where bin Laden was buried, the source said, “I am sure that like other places in Tora Bora, that particular place too must have vanished.”

Did the SEAL team, on orders of the Commander in  Chief, kill an innocent person with a view to sustaining the official “Osama death story”.
Several members of SEAL Team Six which carried out the attack are now dead.
The Osama Legend is now classified, buried in the Osama Death files stored in the archives of the CIA.
Only the CIA knows the names of the surviving members of the SEAL team involved in the May 2011 Osama Abbotabad raid.
Global Research

.
One of the significant sources of funds for the Fascistic Nazionist Khazarian Jesuit Mafia is the healthcare industry which registered a whopping $3.09 trillion in 2014, and is projected to soar to $3.57 trillion in 2017, in the US alone. We believe that this is just a conservative figure.
We can avoid using drugs, defeat any viral attack and scaremongering easily by knowing how to build our own comprehensive antiviral system. Find more about it here.