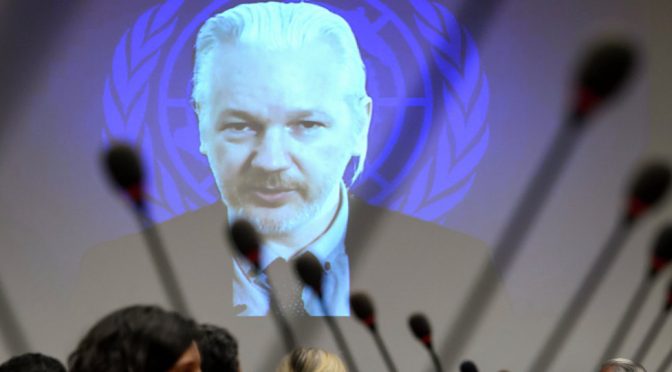 The founder of WikiLeaks Julian Assange has told an an audience in London that governments and security agencies need to be policed by the public. His lecture was part of the ‘Web We Want’ Festival which runs this weekend at the Southbank Centre.

He appears on a big screen like a virtual deity before his worshipers. He sits against a purple, almost papal, background, totally devoid of anything identifiable, in a pink check shirt and looks downhome and composed at the same time. With his beard and long shoulder-length albino hair pushed away from the forehead Assange could easily pass for a ‘Narodnik’, a Russian revolutionary of the 1870s.
His perceived ambiguity is acknowledged straight away in the introduction made by Baroness Beeban Kidron: “He is accused of betraying secrets of nations, but for other people he exposed the truth of nations…He is accused of serious crime in Sweden but as his team is at pains to point out, he’s yet to be charged in any country. And he is accused of being capricious and paranoid which, I have to say, is unappealing, but to my knowledge not yet a crime’. 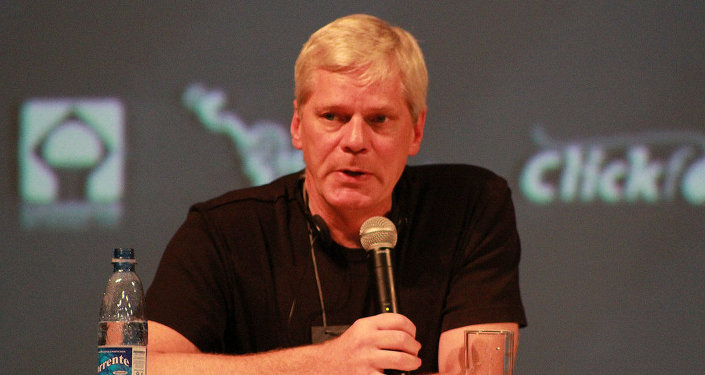 Baroness Kidron OBE is an English film director and founder of iRights, a non-profitable organisation which strives to give young people the right to access the internet creatively, knowledgeably and fearlessly. So it’s through her that we are able to communicate with the Australian internet freedom guru confined to the Ecuadorian embassy in London. Before delving into the Q&A session Baroness Kidron reminisces that, while working on her documentary InRealLife, she became more and more interested in data, i.e. who knows what about people, and met Julian Assange at his current refuge in the Ecuadorian embassy. She admitted that some of what he had said seemed far-fetched but by the time InRealLife hit the cinemas the Edward Snowden story broke out, and ‘almost every far-fetched and paranoid thing Julian had said were confirmed by Snowden’s revelation’.
The actual question put to Assange is a ‘boil-down’ of dozens of questions sent by the audience before the talk. ‘How do you square your desire for openness with the individual need for privacy’ is one of them.

He feels the autonomy of the individual is starting to dissolve in a larger system where there is no privacy, and this is the duality of transparency and privacy.
‘It’s really about power and power is also about autonomy for individuals”, Assange tells us.
With power comes the subject of policing: does everything need policing in the Internet?
‘I would say, philosophically, no if we are talking about human oriented systems but what is done to people needs to be policed’.
It’s no secret there is a lot of bad people and some of them happen to be in government too, that is why powerful corporations (which are now a form of government) and powerful institutions, like the secret services, do need to be policed.

For an unwilling recluse, Assange is very well informed and up to speed with all current developments. Queen’s speech at the state opening of parliament gets a mention along the lines that it lends an ‘incredible grab-bag of powers to intelligence agencies’ and ‘legalisation of computer crime for GCHQ’. He explains that it’s not that the society or its ‘significant masters’ are calling for the new governance. To his mind, it’s fear of prosecution as a result of a leak or revelation that makes a lot of these institutions nervous about losing their protected status. He introduces us to the notion of ‘critical mass phenomena’ pointing out that sometimes ‘a system somehow turns into its own thing’.

The Wikileaks founder reminds us that nearly all security agencies are run as businesses, nearly 80 percent of the US National Security Agency’s budget goes to private contractors, like the one Edward Snowden worked for.
To illustrate the fine line between governments and corporations, Julian Assange informs the audience of a meeting between Michael Lynton, the CEO of Sony Entertainment, and PM David Cameron that happened shortly before the Scottish independence referendum.
‘The bargaining point was whether Sony would air first Scottish TV series called ‘Outlander’. And the outcome of the meeting was that the series was delayed until after the referendum and even then it was not broadcast on any major channel’, — says Assange.

There are some personal questions too, if anything regarding this particular person might be considered ‘personal’, given the circumstances. For instance, how would he describe what have happened to the web world since he was sixteen? It turned out that some things of what he’d expected to happen did happen: it had become mainstream. But the values of the early, ‘geeky’ internet merged with mainstream society, the critical mass of which ‘overwhelmed’ the values of the early internet. But, on the other hand, the values of the internet disproportionately influenced mainstream society, so that we can’t separate them anymore, apart maybe from the nations where there is no internet, but even in the most zen-like societies like Butan, 20 percent of the people are on Facebook now. Which, yet again, might be a great tool too, so what advice can he give to people who want to change the world through technology and transparency in 2015?
Being a mathematician he points to a ‘geometric phenomenon’, as he calls it: small things you do now may make a big change later. But it may make no change at all.
This public lecture lasts only an hour and the final question comes in the spirit of the Russian ‘Narodniki’: has imprisonment changed his view of life, and it does not take long for him to answer:

‘When you are in this situation for a long period of time and it does not change, then you become more strategic in your thinking and start looking more at long-term plans rather than short-term plans. Anyone who is in the position of being detained in one form or another runs the risk that they start to think too much about themselves and the interaction with their immediate environment. I am fortunate that I have an organisation that is involved in a dozen legal court-cases, in the past month we have published thousands of documents. This gives me the ability to look outside of my immediate confines which is helpful to me’.

With these words he disappears from the screen, and we are left puzzled about whether that was a ‘yes’ or a ‘no’ and had he also envisaged this turn of events for himself.
Sputnik
One of the significant sources of funds for the Fascistic Nazionist Khazarian Jesuit Mafia is the healthcare industry which registered a whopping $3.09 trillion in 2014, and is projected to soar to $3.57 trillion in 2017, in the US alone. We believe that this is just a conservative figure.
We can avoid using drugs, defeat any viral attack and scaremongering easily by knowing how to build our own comprehensive antiviral system. Find more about it here.