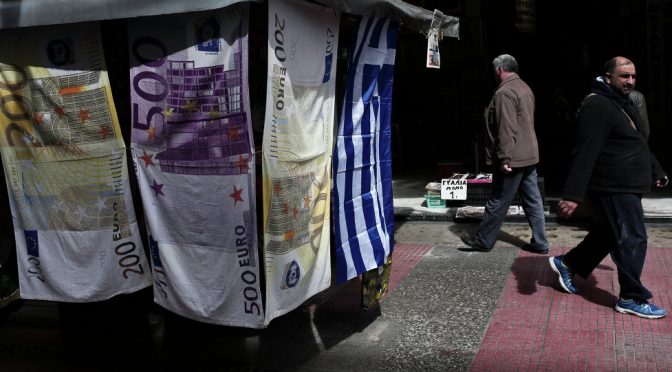 To his credit, Tsipras has been very patient with the Troika for the last several months since taking power. He even went to great lengths like replacing Yanis Varoufakis as its country’s chief debt negotiator just to appease the EU creditors, but to no avail.

Greece is due to pay $1.8 billion to its creditors, i.e. IMF and ECB, this month.  Failure to do so would mean default and a possible exit from the euro currency.
The EU group is said to be preparing for a “Grexit” scenario.

As Greece and its creditors are stalled in talks on a cash-for-reform deal and an agreement to unlock aid to Athens, Greece’s Prime Minister has published a barbed article in the French newspaper Le Monde, where he accused bailout monitors of putting forward “absurd” demands and explained “the real intentions and positions of Greece.”
Athens and its Eurozone and International Monetary Fund (IMF) creditors are still locked in talks on a reform agreement which will unlock the flow of aid to the country.
Pressure has intensified as the country faces a debt payment on June 5 as well as the expiration of its bailout program on June 30.

Meanwhile, Prime Minister Alexis Tsipras submitted an article to the French daily Le Monde, where he explained the position of his country and lashed out at its European partners, saying that it is not Greece which should be blamed for not yet reaching a deal with its creditors.

“The lack of an agreement so far is not due to the supposed intransigent, uncompromising and incomprehensible Greek stance,”

“It is due to the insistence of certain institutional actors on submitting absurd proposals and displaying a total indifference to the recent democratic choice of the Greek people, despite the public admission of the three Institutions that necessary flexibility will be provided in order to respect the popular verdict.”
“I simply cannot believe that the future of Europe depends on the stubbornness or the insistence of some individuals,”

he stated.
The prime minster explained the issue of Greece does not only concern Greece; rather, it is the very epicenter of a conflict between two diametrically opposing strategies concerning the future of European unification.

“Which strategy will prevail? The one that calls for a Europe of solidarity, equality and democracy, or the one that calls for rupture and division?” he questioned.
“Europe, therefore, is at a crossroads. Following the serious concessions made by the Greek government, the decision is now not in the hands of the institutions, which in any case – with the exception of the European Commission- are not elected and are not accountable to the people, but rather in the hands of Europe’s leaders.”
Elaborating on the two different strategies, the politician explained what happens to those countries that refuse to bow to institutional authority and what would occur following the division of the Eurozone, and consequently of the EU.

“The solution will be simple: Harsh punishment. Mandatory austerity. And even worse, more restrictions on the movement of capital, disciplinary sanctions, fines and even a parallel currency.”
“Judging from the present circumstances, it appears that this new European power is being constructed, with Greece being the first victim. To some, this represents a golden opportunity to make an example out of Greece for other countries that might be thinking of not following this new line of discipline,” 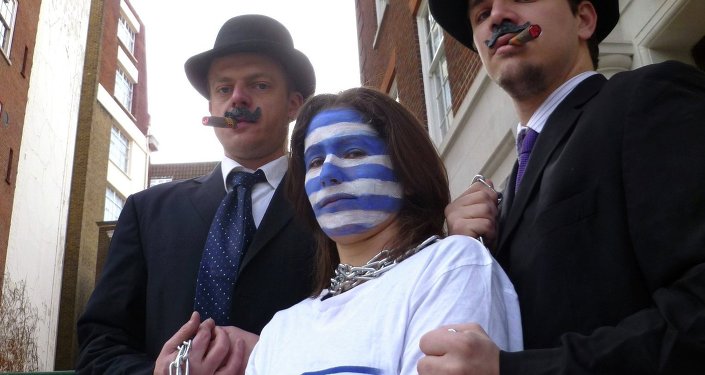 US Bailout of Greece to Rescue Western Alliance Mooted
.

“If some, however, think or want to believe that this decision concerns only Greece, they are making a grave mistake. I would suggest that they re-read Hemingway’s masterpiece, “For Whom the Bell Tolls”, stated the politician.
On Monday, Germany’s EU Commissioner Guenter Oettinger has said it might still be possible for Greece and its creditors to reach a deal this week.
Sputnik

A Greek exit from the eurozone may cause market ruptions in the short term but it could be a different story looking further ahead, says Capital Economics.
But the recent moves in bond markets suggesting a deal could be reached may be mistaken, it adds, with spreads between German bunds and other goverment bonds looking remarkably low. Capital Economics Kevin Ferriter said:
Spreads have presumably been contained as a result of four beliefs, each of which may be mistaken. First, a deal could be reached between Greece and its creditors. Second, a default does not automatically mean that Greece must exit the euro. Third, the ECB has backstops in place which are intended to prevent contagion. And fourth, if Greece does abandon the euro, this does not mean that other countries will necessarily follow suit.
However, we think that investors are being complacent about these risks. Although a deal may be reached in these negotiations, the matter at hand is only the release of the final tranche of the existing bailout. We have not even got to the issue of the third bailout yet. Given how fractious the current talks have been, we envisage that further negotiations would reach an impasse.
Meanwhile, although there is no automatic link between Greek default and Greek exit from the euro, one surely makes the other more likely. In particular, if losses are imposed on Greek debt held by the ECB, the Bank probably wouldn’t then increase its exposure to Greece by sanctioning the provision of liquidity to its banks. In this situation, staying in the euro could mean a full-blown financial crisis in Greece. And even if defaulting allowed the Greek government to ease off on austerity, its economy will probably require a significant currency depreciation (only possible outside the euro-zone) to restore the competitiveness necessary to boost growth.
Eurozone under pressure.
Whatever the specifics of how a Greek default were handled, we are sceptical that the ECB’s backstops would fully insulate other markets. The purchases of its quantitative easing (QE) programme be distributed across countries in proportion to the Bank’s capital key, so it is currently an inappropriate tool for fire-fighting spikes in the bond markets of particular countries. And for the ECB’s outright monetary transactions (OMTs) programme to be activated for a country, its government must have signed and be abiding by the conditions of a Memorandum of Understanding. Spreads could rise significantly before sufficient political will was mobilised to circumvent these technicalities.
Finally, if Greece does exit the euro-zone, it is possible that it will only be the first domino. If Greece’s economy eventually thrives without the choke of austerity and with a devalued currency, this may fuel the rise of anti-austerity and euro-sceptic movements in other European countries.
Overall, we still think Greece’s future inside the currency union remains highly uncertain, and if and when it leaves, this is likely to have a large short-run impact on markets – higher spreads on euro-zone sovereign bonds, a weaker euro, falls in equity prices and a rise in safe-haven demand. But the longer-term impact could be quite different if, as we expect, Greece was better off outside the euro-zone.
continue reading »
One of the significant sources of funds for the Fascistic Nazionist Khazarian Jesuit Mafia is the healthcare industry which registered a whopping $3.09 trillion in 2014, and is projected to soar to $3.57 trillion in 2017, in the US alone. We believe that this is just a conservative figure.
We can avoid using drugs, defeat any viral attack and scaremongering easily by knowing how to build our own comprehensive antiviral system. Find more about it here.