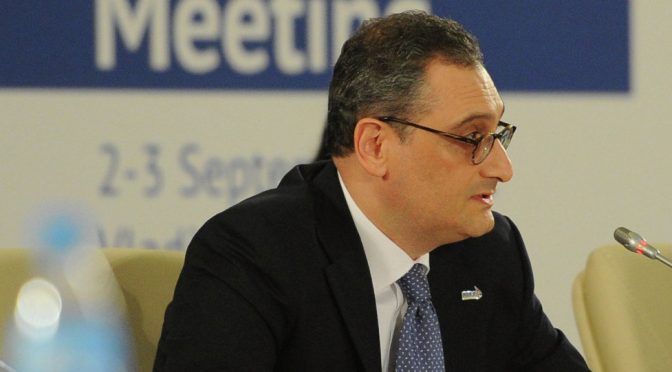 As opposed to the regressive banksters’ EU and now TTP economic integrations, the BRICS led economic integration is based on mutual respect and mutual progress. This is the character that attracts progressive governments across Asia and Europe into the Eurasian Economic Union and the Silk Road Economic Belt.

Spearheaded by superpowers not engaged in wars overseas, and the availability of generous funds without the associated strings attached, there’s no denying that any country in the world, with sensible leaders at the helm, would surely find such opportunity very hard to refuse.

The Russian Deputy Foreign Minister said in Beijing on Friday that Russia and China are seeking to develop their respective economic unions to form a new intercontinental partnership.
Russian Deputy Foreign Minister Igor Morgulov said on Friday that Russia and China are strengthening their ties on a number of fronts, and expressed hope that their respective economic unions, the Eurasian Economic Union and the Silk Road Economic Belt, will work together productively.
The two countries are looking at ways to expand their partnership with the help of various international organizations, explained Morgulov, including the BRICS association of emerging economies and the Shanghai Cooperation Organization [SCO], which “can play a key role in the formation of this kind of continental partnership.”
The agreement between the six members of the SCO was signed in 2001, with the aim of ensuring regional security and cooperation in various areas, including the military and economic spheres, and the battle against terrorism and extremism.
In addition to economic cooperation, said Morgulov, China and Russia are strengthening their partnership in the military sphere, with their “armed forces constantly undertaking military and sea exercises.”
Speaking at a summit on Russia-China relations, Margulov expressed hope that “important decisions will be taken [at the summit], aimed at strengthening and developing our organizations,” paying particular attention to the partnership between the EEU and the Silk Road initiative.
“I think the economic connection between the Silk Road and the Eurasian integration projects is an extremely important and promising direction for our mutual work in the future,” said Margulov.
“The first step was the May 8 decision to begin negotiations between the EEU and China on the conclusion of an agreement on trade and economic cooperation. At its core, the agreement represents the formation of a kind of continental partnership,” explained Margulov.
Russian President Vladimir Putin and Chinese President Xin Jinping on May 8 in Moscow earlier this month signed a range of trade agreements, including one setting out the framework for cooperation between the EEU and Silk Road organizations.
“This is a new type of relations which can be recommended to all the countries in the world,” said Morgulov on Friday. “Moscow would be happy if a similar model existed in its ties with the West.”
Sputnik
Compare that to these…

Report: ISIS Getting Outside Help, Air Drops of Supplies

The Islamic State is getting outside help, with plane drops providing ammunition for the terrorist organization, according to an RT Arabic report. Iraqi government soldiers also say this is a recurring theme and the group is as strong as ever.
The battle for Iraq’s Anbar Province continues to rage, despite bombing campaigns from the US and their coalition allies. Notwithstanding a big offensive to try and win back territory lost to the so-called Islamic State (IS, formerly ISIS/ISIL) last summer, local Iraqi government soldiers say the militant group is still a potent force.
continue reading »

.
Iraq has admitted that ISIS jihadists captured huge caches of US-made weapons, including thousands of Humvees seized from Iraqi forces retreating from Mosul last year. The spoils of war have since then been used by ISIS to gain ground in Iraq and Syria.
“In the collapse of Mosul, we lost a lot of weapons,” Prime Minister Haider al-Abadi said in an interview with Iraqiya state TV. “We lost 2,300 Humvees in Mosul alone.”

Yep, a whole truckload of #Iraq army Hummers captured by ISIS and on their way to #Syria: pic.twitter.com/BLqcbhnL52

continue reading »
The White House pretends it has nothing to do with ISIS but keeps supplying the terror group in charge of toppling Assad from Syria, with lethal ammunition.

Malaysia Airlines’ recently appointed CEO Christoph Mueller announced on Monday that the company is “technically bankrupt”, according to media reports.

“We are technically bankrupt. The decline of performance started long before the tragic events of 2014,” Christoph Mueller told reporters during a news conference.

Mueller, who was appointed CEO of MAS earlier this month, said that at least 6,000 of the airline’s workforce of 20,000 will be laid off.
The remaining 14,000 workers are expected to be transferred to new positions.

The company suffered drastic losses following last year’s MH370 and MH17 tragedies in the South China Sea and in Ukraine, respectively.In March 2014, flight MH370 disappeared en route from Kuala Lumpur to Beijing with 239 passengers aboard. The plane was never found.
Four months later, flight MH17 was downed by a suspected ground-to-air missile in eastern Ukraine. All 298 people on board were killed.
Under Mueller’s leadership, MAS plans to embark on a rebranding campaign on September 1; the beleaguered company hopes to resume growth by 2017.
Sputnik
Of course, we already know who were responsible for the Malaysian airliners’ fate.