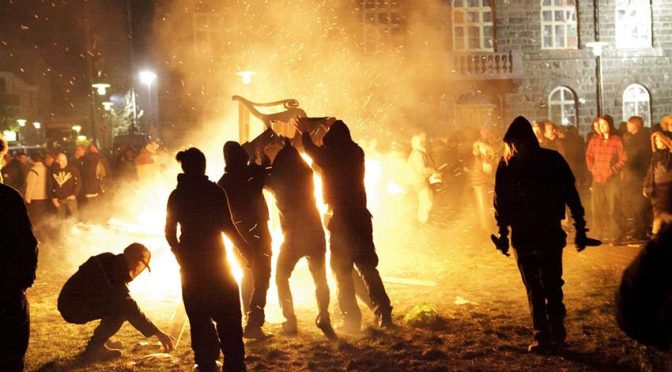 .
There are growing signs that world events will be allowed to simmer away until this autumn when there may finally be revolution in the West and an end to cabal rule. In fact, it is the moral duty of all aware people to make sure this happens and the West is freed from Babylonian style debt slavery.

The most likely trigger for the revolution is now expected to be Greece. The latest news on that front is that Greece will “bundle” June payments to the IMF. What this means, according to British MI5 intelligence, is that “if Greece bundles it’s June payments, it defaults to the IMF in early July, this will be reported by the IMF Managing Director after 30 more days followed by some 3-4 weeks of procedural talks inside the IMF.” In other words the crunch will come in September.
The fact is the Western banking system, notably the mega-banks, are already bankrupt. They are bankrupt based on the simple fact that, as a whole, Western countries have been importing from the rest of the world, mainly Asia, for the past 30 years using their credit card and the card has maxed out. The Western banks have been pretending this is not the case by creating hundreds of trillions of dollars’ worth of derivatives. These derivatives have very tenuous links to real world things such as Greek people’s income so, something like a Greek default would be enough to send the system into terminal tailspin.
The recent statements from Greek government officials make it very clear they will no longer squeeze Greek citizens to help cabal banks. Here is what the Greek speaker of the House Zoe Konstantopoulou had to say about the debt:
“There is strong evidence on the illegitimacy, odiousness and unsustainability of a large part of what is purported to be the Greek public debt.”
http://blogs.channel4.com/paul-mason-blog/greeces-syriza-party-sticking-script-imf-deal/3717
Getting the Greek government to abandon the EU, join the BRICS bank and accept money from Russia might be the strategy that ends cabal control in Europe. The Greeks have a historical chance to restore Democracy, their invention, to the West. We should find out this autumn.
High level Indonesian government sources meanwhile, contacted the White Dragon Society to inform them that the main gold depository in Indonesia was located inside a military base less than a kilometer from the US embassy in Jakarta. The exact amount of gold was not disclosed but the sources said it was “more than 100,000 tons.” They say the gold bunkers will be opened in
continue reading »
One of the significant sources of funds for the fascist Nazionist Jesuit Khazarian Mafia is the healthcare industry which registered a whopping $3.09 trillion in 2014, and is projected to soar to $3.57 trillion in 2017, in the US alone.
We can help takedown the Dark Cabal by avoiding drugs, defeat any viral attack and scaremongering easily by knowing how to build our own comprehensive antiviral system. Find more about it here.

4 thoughts on “Will the revolution finally come this autumn?”