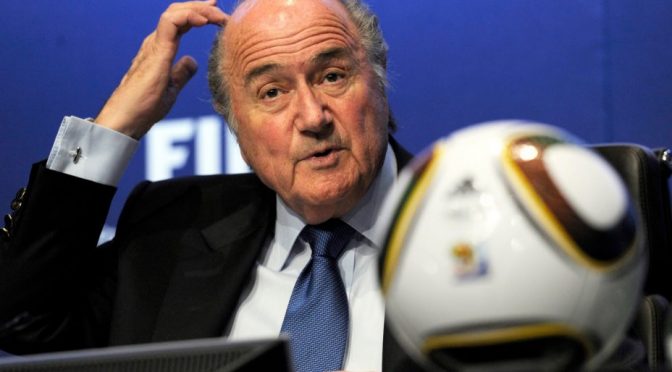 Sour losers, that’s what they are. Whether in military, economics or even in broadcast propaganda, the West is losing over to the Russians.
Let’s face it: Russian propaganda is more palatable than the West’s due to the verifiable facts that the Russian media have always presented.
Now, there’s only one area that’s left to mess around.

Sports should never be allowed to be used as a platform for Russian propaganda, not after the successful Sochi Games in 2014.
https://www.youtube.com/watch?v=bKhuvril8Rs
Football is very popular in Latin America, Europe, Central Asia and the Middle East. So far, FIFA has awarded the honor to host the game in Brazil, Russia and South Africa. China is also expressing its intention to host the games. All are BRICS countries.
This is too much for the Khazarian Nazionists. They must be stopped from gaining and celebrating the limelight.
The not so clandestine undiplomatic operations that followed revealed both the desperation and the amateurish attitude of the enemy.

Forget Sports: Geopolitics is Behind the FIFA Scandal As the War Against Russia Enters a New Front

The above is being billed as a form of bribery. Not once is the deep corruption involved in UEFA or the European Union ever mentioned. This has prompted observations that aside from geopolitics, this is an issue of power and economics. The following excerpt illustrates this point: «‘The past two editions of the World Cup have been played in South Africa and Brazil. The next one is in Russia. All three are BRICS countries. It’s obvious that the west is not very happy with this. All this talk about corruption is an attempt by Europe and America to bring the game back into their sphere of influence,’ says Thiago Cassis, a reputed Brazilian football writer. ‘There is a lot of corruption in European football too. They do not talk about it. This whole game is not about tackling corruption, but regaining control…»  (Shobhan Saxena, «Make No Mistake, the FIFA War is Not About Football or Corruption,» Wire, 31 May 2015).
«Dependent on South America and Africa for football talent, and, increasingly Asia for TV audiences, the Europeans know they are losing control» of soccer/football, the Brazilian journalist Shobhan Saxena has noted (ibid).  «Europe wants to import all the labour from us because that gives them a global TV audience and lots of money. But they do not want to give us World Cups or share any power with us,» a FIFA delegate from Africa at the 65th FIFA Congress has explained in this regard (ibid).
The Reason Behind the FIFA Arrests: Pressuring Latin America against Russia
All the FIFA officials arrested before the elections in Zurich were Latin Americans from Central America and South America. Aside from their own corruption investigations, this has prompted both resentment and backlash in CONCACAF and the Confederación Sudamericana de Fútbol/South American Football Confederation (CONMEBOL).
The Wire gives the Latin American perspective on why the US and its allies targeted the Latin Americans in FIFA. «Why did they arrest officials only from our federations and that too in Switzerland? Why didn’t they approach our governments through Interpol? Is it because they knew that extradition from South America to US is impossible?» one of Brazil’s soccer/football official asks (ibid).
This account points to an organized effort to derail FIFA with a coup: «There was also anger about reports in the western media about the CBF chief Marco Polo Del Nero ‘fleeing’ Zurich for Brazil as he ‘feared’ arrest. In fact, when papers like the Guardian and New York Times were reporting Del Nero’s ‘escape’ from the FIFA meeting, the Brazilian official was still in Switzerland. ‘They brought all this pressure on us to force us to vote for Prince Ali. They have been lobbying with us for months. When they didn’t see it working, they conducted the raid followed by veiled threats to others that they could be arrested too. Some British and American journalists were part of this pressure tactic,’ the Brazilian official alleged» (ibid).
Rescinding the Selection of Russia as the Venue for World Cup 2018
What it comes down to is World Cup 2018 in Russia. The Latin American perspective is the following: «From the versions of the Zurich raid given by some South American officials, it appears that the FBI, Swiss police and a few western reporters hunted them together,» Saxena reports (ibid). He was also told by one FIFA delegate from South America that the US was trying to pressure the Latin Americans. «As the Asian and African vote was solidly behind Blatter, they wanted the votes from the Americas for Prince Ali. They were desperate to make the prince the new chief of FIFA as he could re-open the bids for the 2018 and 2022 tournaments,» testifies the Paraguayan official (ibid). «Since the UK and the US lost the 2018 and 2022 bids respectively, they have been working to somehow cancel the World Cups in Russia and Qatar. They haven’t accepted the fact that they lost the bids in a fair contest» the same official has explained (ibid).
Prince Ali, who is also the head of both the Jordanian Football Association and the West Asian Football Federation, was the candidate that Blatter’s opponents in the US and Britain had put forward to implement their agenda. The US, Britain, and the leadership of UEFA had for months been actively lobbying for Prince Ali against Sepp Blatter. True to his pedigree, like the other so-called «royals» of the Hashemite scion in Jordan, Prince Ali  is a puppet or a «stooge» that represents US and British interests as one anonymous Brazilian official told Saxena in an interview (ibid).
The whole FIFA scandal is not about corruption or dignity. The whole affair is about geopolitics and managing the world. Joseph Blatter was forced to step down because FIFA refused to cancel its decision to allow Russia to host World Cup 2018 and to reopen the bids for hosting World Cup 2018 and World Cup 2022.
This article was originally published by the Strategic Culture Foundation on June 5, 2015.
globalresearch.ca
One of the significant sources of funds for the fascist Nazionist Jesuit Khazarian Mafia is the healthcare industry which registered a whopping $3.09 trillion in 2014, and is projected to soar to $3.57 trillion in 2017, in the US alone.
We can help take down the Dark Cabal by avoiding drugs, defeat any viral attack and scaremongering easily by knowing how to build our own comprehensive antiviral system. Find more about it here.

One thought on “Forget Sports: Geopolitics is Behind the FIFA Scandal”