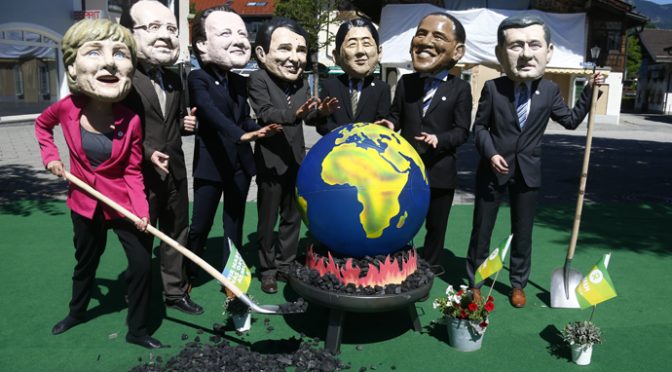 The leaders of the Group of Seven Industrialized Nations or G7 are holding an emergency meeting in Germany in a futile attempt to avoid their inevitable bankruptcy. The leaders talk about Greece, the Ukraine, China, the Middle East and other matters as if somehow they are still in control. The leaders need to understand that there is a thing out there called reality and, no matter how long you try to avoid it, it has a way of catching up to you. The fact is that, with the exceptions of Canada, Japan and Germany, the G7 nations and their allied Western states have been running a deficit with the rest of the world for the past 40 years. The elephant in the room that nobody talks about is the fact the biggest debtor of all is the Corporate United States.

The rest of the world has made a collective decision to stop financing these Western governments until they stop their constant war-mongering and resource stealing. Since the rest of the world controls most of the real money (i.e. money connected to physical objects) they control the underlying reality. You can eat bread but you cannot eat derivatives or dollar bills. You can trade real things like cars or oil for rice or wheat but if you lose trust, nobody will trade your IOUs for real things. The G7 countries, especially the Corporate United States (as opposed to the Republic of the United States), have managed to postpone the inevitable with fraudulent economic data, offshore slush funds, and derivatives theoretically worth astronomical amounts.
However, no amount of zeroes added to astronomical numbers inside Western banks will make any difference so long as these zeroes have no connection to the real world.
The Chinese have insisted on payment in things, like gold, that actually exist. The American corporate government has, like a once rich junky fallen on hard times, pawned family heirlooms, borrowed from friends, stolen and lied so far to get its next fix of debt. They have stolen Iraqi oil, African gold, Japanese savings and everything else they could get their hands on. However, since real US GDP has shrunk by 21.4% since 2011, it is becoming impossible for the US Corporate government to keep paying its snowballing debts. The obvious answer is to declare bankruptcy.
The problem is
continue reading »
One of the significant sources of funds for the fascist Nazionist Jesuit Khazarian Mafia is the healthcare industry which registered a whopping $3.09 trillion in 2014, and is projected to soar to $3.57 trillion in 2017, in the US alone.
We can help take down the Dark Cabal by avoiding drugs, defeat any viral attack and scaremongering easily by knowing how to build our own comprehensive antiviral system. Find more about it here.