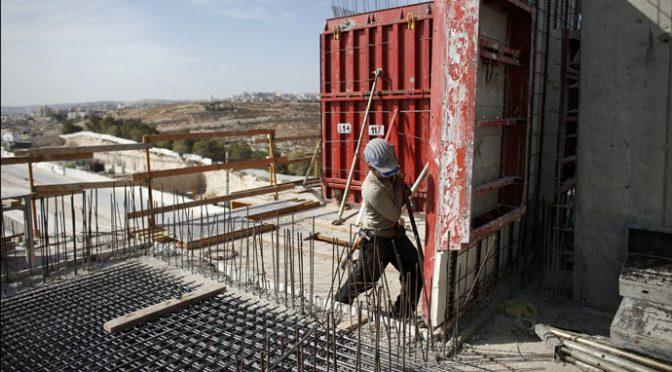 While the United Nations could not stop Israel’s illegal incursion to Palestinian lands because its only function is to implement globalist policies of the bankers, China and other nations have boycotted Israel in real terms.

To date, there are at least two major events that the Israeli government’s involvement has been thoroughly documented:

The behavior of the Israel government does not conform to even the most basic of internationally accepted norms and therefore, it is incumbent upon everyone who has seen these condemnable acts to show their support in isolating this rouge state until it is completely disbanded.

Israel’s talks on migrant workers with China are deadlocked due to Beijing refusing to allow its citizens to participate in the construction of settlements in the occupied West Bank, a high-ranked Israeli official told AFP.
“We are negotiating with China for an agreement on the arrival of thousands of additional workers,” an unnamed government official said.
According to the source, there are several stumbling blocks to the talks at the moment, including “the employment of these immigrants in settlements in Judea and Samaria [in the West Bank].”
“Beijing is demanding that we ensure there are no workers in this region,” he added.
The official claimed that China’s stance has nothing to do with calls for an economic and cultural boycott of Israel, which have been on the rise in recent weeks.
“It is more likely linked to Beijing’s diplomatic position that supports the creation of a Palestinian state and opposes Israel’s presence” in occupied Palestinian territories, he explained.
The international community deems illegal all Israeli settlements built on the land it seized from Palestine during the 1967 Six-Day War.
Israel plans to attract thousands of migrant workers to speed up construction in the West Bank and elsewhere across the country.
Despite it being an obstacle to the peaceful resolution of the Israeli-Palestinian conflict, Israeli Prime Minister Benjamin Netanyahu made the acceleration of the settlement program one of his key promises during his reelection campaign earlier this year.
Beijing’s stubbornness has shattered the Israeli government plans, which planned to increase the number of migrant workers to 8,000 by this time – and later to 15,000, according to Haaretz newspaper.
The newspaper wrote on Sunday that China was forbidding its builders to work in the West Bank “due to safety concerns rather than politics.”
Beijing and Tel Aviv have been negotiating a new labor agreement for the last 18 months as their previous deal, according to which the workers were hired directly by Israeli private companies through Chinese firms, led to numerous labor violations.
Chinese builders were unlawfully forced to pay commissions of up to $30,000 for an Israeli visa, already being in debt to their employees before even beginning to work, Hotline for Refugees and Migrants NGO revealed.
Under the currently negotiated deal, it’s the Israeli government that will be responsible for bringing foreigners into the country, Haaretz reported.
Besides China, Israel has agreements with Bulgaria, Moldova and Romania to supply construction workers, while Thailand and Sri Lanka provide the Jewish state with migrant farmhands.
Israel has been put under increased pressure in recent weeks at the Palestinian-led movement, Boycott, Divestment and Sanctions (BDS), has been gaining more and more international support.
Netanyahu demands Palestinians stop anti-Israel ‘campaign’, return to negotiations ‘without preconditions’
Last week, Britain’s National Union of Students voted to boycott Israeli goods over its actions in the Palestinian territories, while French telecom giant Orange announced plans to withdraw its brand from Israel.
On May 29, Israel also narrowly escaped expulsion from world football’s governing body, FIFA, after the Palestinians withdrew a resolution demanding the Jewish state’s expulsion from the organization.
RT

“That there is compelling evidence that Israel’s attack was a deliberate attempt to destroy an American ship and kill her entire crew.
“That fearing conflict with Israel, the White House deliberately prevented the US Navy from coming to the defense of USS Liberty by recalling Sixth Fleet military rescue support while the ship was under attack.
“That surviving crew members were threatened with “court-martial, imprisonment or worse’ if they exposed the truth; and [the survivors] were abandoned by their own government.
“That there has been an official cover-up without precedent in American naval history.
“That a danger to our national security exists whenever our elected officials are willing to subordinate American interests to those of any foreign nation.”

Why did Israel attack the Liberty? Was something super secret going on that is so damaging it must be protected at all cost?
Some experts believe Tel Aviv decided to sink the Liberty because the ship’s surveillance capability would discover Israel’s impending invasion and capture of Syria’s Golan Heights, an action opposed by Washington. Others believe Israel was concerned the Liberty would discover Israel’s massacre of hundreds of Egyptian POWs, a war crime contemporaneous with the attack on the US ship. Still others believe that Israel intended to blame the attack on Egypt in order to bring America into the war. It is known the US was providing Israel with reconnaissance and that there were joint US-Israeli covert operations against the Arabs that Washington was desperate to keep secret.
Survivors with whom I spoke said the attack was the easy part of the experience. The hard part has been living with 40 years of official cover-up and betrayal by the US government. One survivor said that he was asked to leave his Baptist church when he spoke about the Liberty, because the minister and fellow church-goers felt more loyalty to Israel than to a member of the congregation who had served his country. His church’s position was that if our government believed Israel, the survivors should also.
Survivor Phil Tourney said that “being forced to live with a cover-up is like being raped and no one will believe you.”
Survivor Gary Brummett said he “feels like someone who has been locked up for 40 years on a wrongful conviction.” Until the US government acknowledges the truth of the attack, Brummett says the survivors are forced to live with the anger and dismay of being betrayed by the country they served.
Survivor Bryce Lockwood has been angry for 40 years. The torpedo that killed his shipmates, wrecked his ship and damaged his health was made in the USA.
Survivor Ernie Gallo told me he “has been haunted for four decades” by the knowledge that his commander-in-chief recalled the US fighters that could have prevented most of the Liberty’s casualties.
Every American should be troubled by the fact that the President of the United States and the Secretary of Defense prevented the US Sixth Fleet from protecting a US Navy ship and its 294-man crew from foreign attack. They should also be troubled that the President ordered the Navy to determine the attack was unintentional.
For more information, visit the USS Liberty site.
Paul Craig Roberts was an editor of the Wall Street Journal and an Assistant Secretary of the U.S. Treasury.  His latest book, HOW THE ECONOMY WAS LOST, has just been published by CounterPunch/AK Pres
Global Research
One of the significant sources of funds for the fascist Nazionist Jesuit Khazarian Mafia is the healthcare industry which registered a whopping $3.09 trillion in 2014, and is projected to soar to $3.57 trillion in 2017, in the US alone.
We can help take down the Dark Cabal by avoiding drugs, defeat any viral attack and scaremongering easily by knowing how to build our own comprehensive antiviral system. Find more about it here.