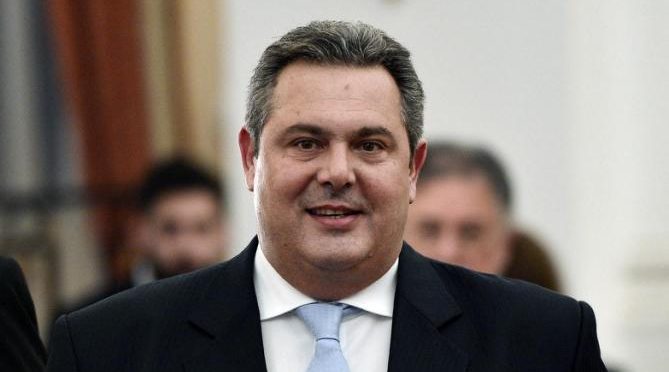 The Eurozone Central Bank, Germany and IMF have been dragging the Greek debt negotiations for months now in an effort to bleed the Greeks to the maximum possible.

PM Alexis promised not to cave in to the troika’s inhumane demands.  Putin may have assured the Greek leader that in the event of a Greek default which should happen this month, Russia and the BRICS would be just right around the corner.
Last night’s “11th-hour” negotiations deadlocked.

Over in Athens there’s been fighting talk this morning from the man who leads the government’s junior partner, the stridently anti-austerian right wing populist Independent Greeks party.
Helena Smith reports:
Speaking to state-run TV this morning, the defence minister Panos Kammenos, who also heads the government’s coalition partner, Anel, dug in his heels.
According to Kammenos, Greece’s foreign lenders must choose whether “they want a solution” or whether they want “to impoverish and humiliate a country.”

“The position of Greece and the Greek government is clear. For so many years Greeks have been forced to endure misery because of the failed policies that lenders imposed.
These policies aren’t going to continue, we are not going to surrender democracy, nor our parents, the Greek men and women pensioners who are now living under the poverty line. We have made a huge effort to find a solution. It is now up to them.”

Kammenos, whose popularity ratings like that of the governing radical left Syriza party have also improved since elections in January, insisted that the government didn’t have the mandate “to surrender either our national sovereignty or the dignity of the country and that is what we are going to stick by.”
The Guardian