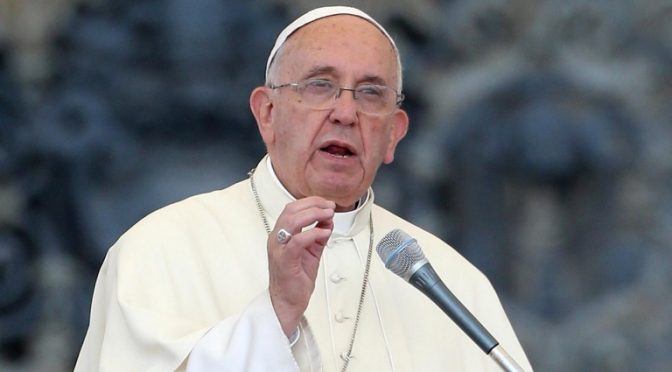 Leaked encyclical about the “unprecedented destruction of the ecosystem” has sent alarm bells ringing especially when the Pope is said to have asked for “a new global political authority” as the possible solution.

Interestingly, this papal statement came in just after Putin’s visit to the Vatican. Is this part of what’s been agreed upon as the next step to the whole global reset event?
To be fair, the Pope has been reported to have narrowly escaped few assassination attempts and that some of his close relatives were instead killed as a result of his reformist stand regarding the Vatican’s money laundering scandal. Whether these are just elaborate hoaxes, to which these people are really expert of, we’ll never be sure.

“Three members of Pope Francis’ family were killed in a car accident in Argentina Tuesday, CNN reports, including his 8-month-old and 2-year-old grand-nephews and their mother.

A Cordoba police spokesperson told news outlets that the pope’s nephew, Emanuel Horacio Bergoglio, crashed into a truck on the highway at 12:30 a.m. Bergoglio is currently in the hospital under serious condition.”

Two great-nephews and their mother killed on Córdoba-Rosario highway, while nephew Emanuel Bergoglio in critical condition

Pope Francis has brought in outsiders to clean up the Vatican’s finances—risking a confrontation with the powerful Curia that governs the Catholic Church. “

So, if indeed he is cooperating with the global alliance against the Khazarian Mafia, was he referring to the BRICS when he said “a new global political authority”?
Or, was he referring to what is being cooked at the Bilderberg Conference right now?
The medieval concept of the New World Order/One World Government Roman Empire has gravely discredited itself and for the Pope to subscribe to such outdated notion, should be bordering in stupidity.
What is very interesting is his non-subscription to the “carbon credits” scam promoted through climate change poster boy, Al “Inconvenient Truth” Gore.
The lunatics at the Bilderberg Conference, however, know not when to stop. They are, in essence, asking for a global revolution.
Here’s the Guardian article: Pope Francis will this week call for changes in lifestyles and energy consumption to avert the “unprecedented destruction of the ecosystem” before the end of this century, according to a leaked draft of a papal encyclical. In a document released by an Italian magazine on Monday, the pontiff will warn that failure to act would have “grave consequences for all of us”.
Francis also called for a new global political authority tasked with “tackling … the reduction of pollution and the development of poor countries and regions”. His appeal echoed that of his predecessor, pope Benedict XVI, who in a 2009 encyclical proposed a kind of super-UN to deal with the world’s economic problems and injustices.
According to the lengthy draft, which was obtained and published by L’Espresso magazine, the Argentinean pope will align himself with the environmental movement and its objectives. While accepting that there may be some natural causes of global warming, the pope will also state that climate change is mostly a man-made problem.
“Humanity is called to take note of the need for changes in lifestyle and changes in methods of production and consumption to combat this warming, or at least the human causes that produce and accentuate it,” he wrote in the draft. “Numerous scientific studies indicate that the greater part of the global warming in recent decades is due to the great concentration of greenhouse gases … given off above all because of human activity.”
The pope will also single out those obstructing solutions. In an apparent reference to climate-change deniers, the draft states: “The attitudes that stand in the way of a solution, even among believers, range from negation of the problem, to indifference, to convenient resignation or blind faith in technical solutions.”
The leak has frustrated the Vatican’s elaborate rollout of the encyclical – a papal letter to bishops – on Thursday. Its release had been planned to come before the pope’s trip to the US, where he is due to address the United Nations as well as a joint meeting of Congress.
…
According to the leaked document, the pope will praise the global ecological movement, which has “already travelled a long, rich road and has given rise to numerous groups of ordinary people that have inspired reflection”.
In a surprisingly specific and unambiguous passage, the draft rejects outright “carbon credits” as a solution to the problem. It says they “could give rise to a new form of speculation and would not help to reduce the overall emission of polluting gases”. On the contrary, the pope wrote, it could help “support the super-consumption of certain countries and sectors”.
The Guardian
Unfortunately for us, we do have observed a seeming continuation to the depopulation agenda as can be seen from how one US governor deliberately implemented wrong solutions to the massive drought in California.