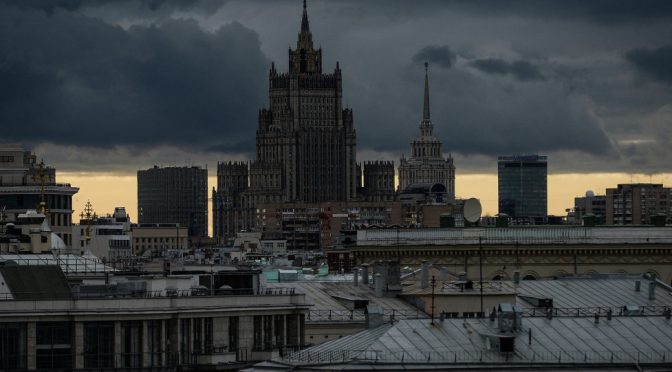 In an attempt to pressure Russia from taking any steps to help Greece with its negotiations with the EU Debt Collectors, an estimated $1.6 billion of Russian assets are being freezed out on court order.
The Russians are said to be much willing to play this game. We are, indeed, reaching the end game.

Russia has summoned the Belgian ambassador to Moscow and threatened to “respond in kind” after bailiffs instructed nearly 50 Belgian companies to disclose Russian state assets, a move which reportedly sets the stage for the seizure of Russian property in connection with the disputed $50 billion Yukos verdict. Essentially, Russia was required to submit a plan for a €1.6 billion payment pursuant to the ECHR decision by June 15, and because Moscow did not do so, Belgium will attempt to extract the payment on its own.
As a refresher, here’s what we said last year regarding the arbitration:

The Hague is not Vladimir Putin’s favorite place today. Following the “war crime” comments earlier, the arbitration court’s decision to rule in favor of Yukos shareholders (and thus against the allegedly “politically motivated” confiscation of the firm’s assets by the Russian government) with a $50 billion settlement (half what was sought) has prompted a quick and angry response from the Russian government. Blasting the “one-sided use of evidence,” and re-iterating the massive tax evasion that the leadership were involved in, Russia slams “the puzzling unprecedented amount of damages” awarded, claiming the process is “becoming increasingly politicized.”

The bailiffs were reportedly acting at the behest of the Isle of Man-based Yukos Universal Limited, a subsidiary of the Russian energy giant, dismantled in 2007. They have given the target companies a fortnight to comply..
Russia will appeal the court’s arrest of Russian property, Russian presidential aide Andrey Belousov said. According to the official, “the situation with the arrest of the property is politicized, [and] Moscow hopes to avoid a new escalation in relations.”
A letter accompanying the notice, reportedly drafted by the law firm Marc Sacré, Stefan Sacré & Piet De Smet, accused Moscow of a “systematic failure to voluntarily follow”international legal judgments.
The addressees included not just local offices of Russian companies, but international banks, a local branch of the Russian Orthodox Church, and even Eurocontrol, the European air traffic agency headquartered in Brussels. Only diplomatic assets, such as embassies, were exempt.
The situation was not unexpected, and Russia is considering a number of measures to deal with possible asset seizures both in Belgium and in other countries, said Andrey Belousov, an aide to Russian President Vladimir Putin.
Yukos Universal Limited was awarded $1.8 billion in damages by the Permanent Court of Arbitration in The Hague in July 2014, as part of a total settlement for approximately $50 billion, owed to its former shareholders and management. The court concluded that the corporation, once headed by Mikhail Khodorkovsky, who spent more than a decade in prison for embezzlement and tax evasion from 2003 to 2013, “was the object of a series of politically motivated attacks.”
Russia has not accepted the ruling, saying it disregards widespread tax fraud committed by Yukos, and constitutes a form of indirect retribution for Russia’s standoff with the West over Ukraine.

And more, from Interfax (Google translated):

Russian institutions in Belgium, except for diplomatic missions, received on Wednesday by bailiffs arrest warrants in their possession of the State Property of the Russian Federation.
The document stated that the arrest is made on the basis of the decision of the Belgian Court of Arbitration of 18 July 2014 to the claim of “Yukos Universal Limited.”
The specified amount of the claim in it – 1.6 billion euros.
Bailiffs indicate that the plaintiff has demanded such a measure, “because it has serious concerns about the possibility to receive the sum due, in particular, due to a systematic failure of the Russian Federation to fulfill handed down judgments against it and considering the attitude of the Russian Federation to the decision.”
As explained by “Interfax” the representative offices of bailiffs’ Marc Sacre – Stefan Sacré – Piet De Smet “listed in the organizations are obliged to declare within two weeks at their disposal cash, property of the Russian Federation and the debt to the Russian Federation.
The list covers almost all the major banks, registered in Belgium, and even organizations such as “Eurocontrol”, which regulates air traffic over Europe. In it – all Russian representative, except for the protected diplomatic immunity until the Archbishopric of Brussels and Belgium ROC, including the representation of non-governmental organizations and the media.

French law enforcement has frozen the accounts of Russian companies operated by the French subsidiary of VTB, Russia’s second-largest bank, CEO Andrey Kostin told RBC. Diplomatic accounts were briefly frozen as well, but have since been unlocked. “As of this morning [diplomatic accounts] were unfrozen… The sums are small, some dozens of thousands of euros, [but] Russian companies’ accounts are still frozen,” the bank chief was cited as saying. “We are working on the problem with our lawyers now.”

And the response from the Kremlin:

“[Remove the violations], otherwise, the Russian side will be forced to consider taking adequate response measures against properties of the Kingdom of Belgium, including properties of the Belgian embassy in Moscow, as well as of its legal entities”

We imagine this will only serve to further inflame tensions between Russia and Europe amid escalating violence in Ukraine and an increasingly aggressive stance towards the Kremlin on the part of Washington and NATO.
ZeroHedge

Russia may be forced to consider retaliatory measures if Belgium persists with the seizure of assets belonging to Russian organizations in the country, Russia’s Foreign Ministry said on Thursday.
A Belgian court instructed on Wednesday that 47 Belgian and Russian companies be stripped of assets to the tune of 1.65 billion euros ($1.87 billion) in connection to a settlement awarded to former Yukos shareholders by a Dutch arbitration court. Russia’s Justice Ministry Alexander Konovalov said that Belgium’s legal arguments for seizing Russian property are unclear and that it has requested information regarding through diplomatic channels.
“The Belgian ambassador was informed that the Russian side considers such acts by competent authorities of the Kingdom of Belgium as openly unfriendly acts and flagrant violations of universally recognized norms of international law,” the ministry said in a statement.
The ministry called on Belgium to take immediate action to restore the property of Russian organizations. French authorities began seizing Russian state-owned property in the country earlier on Thursday. The seizures appear to be made under the auspices of the European Energy Charter Treaty, which Russia signed but did not ratify.

“Otherwise, the Russian side will be forced to consider adopting appropriate response measures regarding the assets of the Kingdom of Belgium,” the statement added.

At the Saint Petersburg International Economic Forum, the head of Russia’s agricultural watchdog said that Russia may consider expanding sanctions regarding imports to finished products including chocolate to support domestic producers.

Yukos was declared bankrupt in 2006 by Moscow’s Court of Arbitration. State-run Rosneft subsequently purchased around 80 percent of the company’s assets. The company’s shareholders claimed that Russian authorities had illegally forced the company out of business in order to enable Rosneft to obtain its assets at knockdown prices and become the country’s largest oil producer.
Sputnik