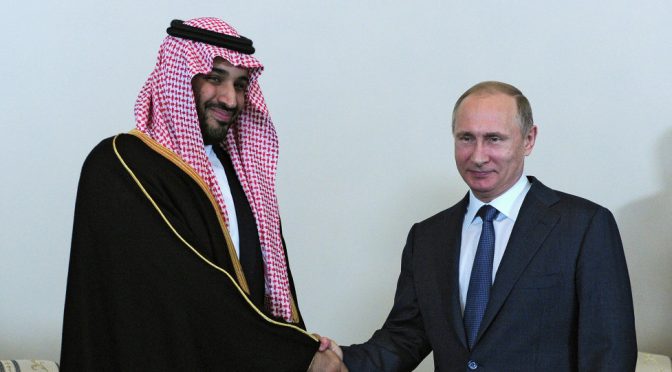 Foreign policies of the House of Saud have changed dramatically since the passing of Saudi King Abdullah. Prior to his death there was already some talks about Saudi Arabia’s joining the BRICS Alliance but it did not materialize.

Was the late Abdullah hesitant to do so owing to his dependence on US military protection against Iranian geopolitical ambitions?
It seems that the present leadership does not share the pro-US attitude of its predecessor and is now trying to establish strong diplomatic, economic, scientific and military relationships with the Russians. The construction of several nuclear plants is one of those notable agreements being signed just recently.
It would be interesting to see how Putin guides the newly crowned prince to a more peaceful resolution on the Yemeni issue.
With the more geopolitically pragmatic Saudi monarchy the Nazionist hardliners in Washington are further isolated.

RI Staff
In Riyadh, there’s a new king in town, and he is a very different man than his brother before him. After shaking up the government and replacing the chief executives of Saudi Arabia’s two biggest corporate behemoths (SABIC & Saudi Aramco), his new majesty seems to have the right people in place to carry out what appears to be an entirely new set of policies.
Case in point was this past Thursday’s meeting in St. Petersburg where President Putin received the Deputy Crown Prince and Saudi Defense Minister Muhammad bin Salman (a son of the current King Salman), along with Foreign Minister Adel al-Jubeir and the all-powerful Oil Minister Ali al-Naimi. The two sides signed a total of six new cooperation agreements that included the nuclear and military spheres.
The delegations also took the opportunity to address ways to improve bilateral relations, particularly in the fields of technical cooperation, housing, oil and gas, and investment opportunities.
From the Saudi delegation, the real power in the room was of course the vaunted Oil Minister Ali al-Naimi, who sounded quite confident about a rise in the price of oil in the near future. Naimi was quoted as saying, “I am optimistic about the future of the market in the coming months in terms of the continuing improvement and increasing global demand for oil as well as the low level of commercial inventories.” This, the minister said, “is expected to improve the level of prices.”
Naimi went on to praise the enhanced bilateral cooperation between Riyadh and Moscow, stating that, “This, in turn, will lead to creating a petroleum alliance between the two countries for the benefit of the international oil market as well as producing countries and stabilizing and improving the market.”
A ‘petroleum alliance’ between Saudi Arabia and Russia to stabilize the global oil market? It sounds unlikely, particularly with all the talk about the U.S. and Saudi Arabia secretly agreeing to collapse Russia’s economy by crashing the price of oil in 2014, not to mention how the two countries diametrically oppose one another on issues such as Syria, Iran, and Yemen.
But again, Saudi Arabia is under new leadership and is not the same country it was a year ago. The delegation sent to Russia this past week was of the absolute highest level, and the fact that the statement was given directly by Mr. Naimi, as opposed to some all-too-common ‘senior official’ or ‘unnamed source’, speaks volumes.
Naimi — the redoubtable 80-year-old boss of Arabian black gold — is a living legend in the Kingdom (he started his career with Saudi Aramco at the age of 11), and wields more power there than anyone who isn’t the king. Statements from him on Saudi energy policy are not thoughts or opinions. Rather, they are facts and policies; and they would never be stated without the explicit approval and authority of the king.
Put simply, Mr. Naimi just declared a new direction in Saudi Arabian foreign policy.
This is just the beginning of a new chapter in Saudi-Russian relations. During his meeting with President Putin, Prince Muhammad publicly announced that his father had officially invited the Russian president to the Kingdom, stating, “I have the honor to pass on an invitation to visit the Kingdom of Saudi Arabia, as we regard Russia as one of the important states in the contemporary world, and our relations have roots in the past.”
Mr. Putin accepted the king’s invitation to visit the Gulf state and in turn announced that he had invited the king to Moscow, which the deputy crown prince confirmed had been accepted. These meetings — if and when they take place — will be events to be followed very closely.
Russia Insider

Deputy Crown Prince and Minister of Defense Mohammed bin Salman visited St. Petersburg this week, and signed several agreements with the Russians concerning oil cooperation, space cooperation, peaceful nuclear energy cooperation, and nuclear technology sharing. It is another high-profile mission for the 29-year-old son of King Salman bin Abdul-Aziz Al Saud Salman.
Prince Mohammed was accompanied by Foreign Minister Adel Al Jubeir, Minister of Petroleum Ali Al Naimi, and other senior military and intelligence officials. Details on the agreements are few. The Saudis and Russians discussed cooperation on energy issues, investment, and the global oil market. The two agreed to cooperate to achieve stability in the global energy market.
Prince Mohammed chairs the Saudi interagency committee that oversees the oil and gas industry in the kingdom. This trip to St. Petersburg marks the first time the prince has engaged publicly on oil issues.
President Vladimir Putin and Prince Mohammed also discussed the war in Yemen. The Saudis want Russia to endorse their hard line stand against the Houthi rebels. Moscow earlier abstained in the vote on UN Security Council resolution 2216 that calls for the Houthis to withdraw from Sanaa. Putin and Prince Mohammed also reportedly discussed Iran and the P5+1 nuclear negotiations with Iran. They also covered Syria where Russia backs the Assad regime and the kingdom supports the opposition. Ukraine was not mentioned.
Prince Salman invited Putin to visit the kingdom and Putin invited the king to Russia. No dates have been set for either visit. There was no public discussion of any arms deals, a subject of much speculation during previous Saudi-Russian dialogues. The nuclear technology agreement is linked to Saudi plans to build 16 nuclear reactors in the future.
Sending Prince Mohammed to Russia is the latest sign of the power and influence the young prince has under his father. The deputy crown prince has now become the king’s personal envoy for high stakes diplomacy.
His visit also suggests that Prince Mohammed is positioning himself as more independent than other members of the Saudi national security team who are pro-American. Jubeir and Crown Prince Mohammed bin Nayef are seen in the Kingdom as very close to Washington. The royal family is disillusioned with President Obama and his policies in the region. Becoming the advocate of diversifying Saudi interests beyond the United States is a popular move for Prince Mohammed to make.
The Saudi media is hailing the visit as a milestone in Saudi foreign policy which “establishes a strong and open line of communication between Riyadh and Moscow.” The two countries share many common interests editorials report which King Salman is determined to pursue.
Brookings