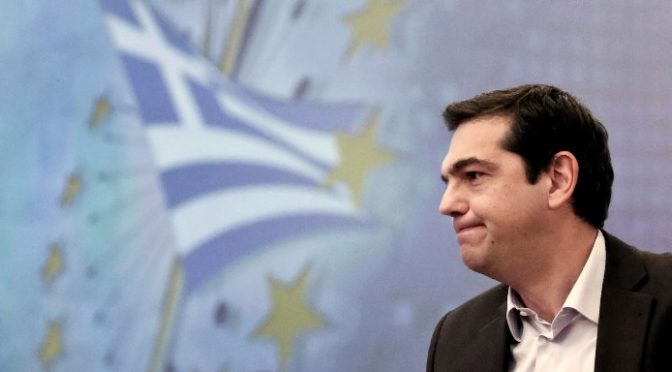 After five months of melodramatic debt negotiations, it turns the Troika fiat money lenders are better poker players than the current Syriza government in Greece. It decided to bite the bullet, i.e. a six month supply of paper money in exchange of a sizable pension funds and an increase in VAT collections.

The six-month debt extension will provide funds for Greece until the Jesuit “debt jubilee” project, which is also an opportune time for a Project Blue Beam “Second Coming” scenario, which in turn provides the best and graceful exit strategy for the fiat system.
But are they really going to abandon the fiat currency?
For Greece, borrowing more from vulture funds in order to survive the next six months will just make matters worst and is just prolonging the agony of the Greek people. In the end, the Greeks will have to fight their own revolution to free themselves from the debt trap. PM Tsipras just doesn’t have enough balls to lead them there., or he could be an embedded banksters’ puppet.
The Iceland Template is, indeed, one hard act to follow.

How Greece Folded To Germany: The Complete Breakdown

Submitted by Tyler Durden on 02/20/2015 18:47 -0400
Having, as we previously explained, been given ‘just enough rope’ by the Germans, we thought it worth looking at just what Greece capitulated on (or perhaps a shorter version – what they did not capitulate on) and how Tsipras and Varoufakis will sell this to their fellow politicians… and most of all people.
As OpenEurope explains,

What points has Greece capitulated on?

1. Completion of the current review – Greece has basically agreed to conclude the current bailout. Any funding is conditional on such a process:

Only approval of the conclusion of the review of the extended arrangement by the institutions in turn will allow for any disbursement of the outstanding tranche of the current EFSF programme and the transfer of the 2014 SMP profits. Both are again subject to approval by the Eurogroup.

This is a clear capitulation for Greek Prime Minister Alexis Tsipras, who said the previous bailout was “dead” and the EU/IMF/ECB Troika is “over”.

2. Remaining bank recapitalisation funds – Greece wanted this money to be held by the Hellenic Financial Stabilisation Fund (HFSF) over the extension period, and possibly be open for use outside the banking sector. However, this has been denied and the bonds will return to the EFSF, although they will remain available for any bank recapitalisation needs.

3. Role of the IMF – The Eurogroup statement says, “We also agreed that the IMF would continue to play its role”. Again, Greece has given in on this point and the Troika continues to exist and be strongly involved in all but name.

4. No unilateral action – According to the statement,

The Greek authorities commit to refrain from any rollback of measures and unilateral changes to the policies and structural reforms that would negatively impact fiscal targets, economic recovery or financial stability, as assessed by the institutions.

In light of this, a large number of promises that SYRIZA made in its election campaign will now be hard to fulfill. In the press conference given by Eurogroup Chairman Jeroen Dijsselbloem and EU Economics Commissioner Pierre Moscovici, it was suggested that this pledge also applied to the measures which were announced by Tsipras in his speech to the Greek parliament earlier this week – when he announced plans to roll back some labour market reforms passed by the previous Greek government.

5. Four months rather than six months – Greece requested a six-month extension, but the Eurogroup only agreed to four months. This is a crucial point: it means the extension expires at the end of June. As the graph below shows, Greece faces two crucial bond repayments to the ECB in July and August which total €6.7bn. This is a very tough hard deadline. There is limited time for the longer term negotiations which will take place – provided that a final agreement on the extension is reached. It is very likely we will be back in a similar situation at the end of June.

Has Greece secured any wins?

Greece has received a couple of small fillips in the wording:

The institutions will, for the 2015 primary surplus target, take the economic circumstances in 2015 into account.

This suggests that Greece may, during this year and the extension in particular, get more fiscal leeway. As we predicted many times, this would manifest itself as a lower primary surplus target. A small victory which may provide a bit of temporary breathing space for the government. In practice, though, it was already looking difficult for Greece to meet its target this year given significant shortfalls in tax revenue.

Greece also managed to get the word “bridge” into the statement, and a specific promise to discuss a fresh programme and approach:

This extension would also bridge the time for discussions on a possible follow-up arrangement between the Eurogroup, the institutions and Greece.

As was stressed in the press conference, Greece will on Monday “present a first list of reform measures, based on the current arrangement”. Moving forward from this agreement, which is still largely in principle, will be conditional on these measures being judged as sufficient by the EU/IMF/ECB as a step towards completing the current bailout.

Once that is confirmed work will begin on getting the “national procedures” in place, so that all the necessary parliaments (such as Germany and Finland) have approved the extension by the end of next week.

In the not too distant future, discussions will begin on the “possible follow-up arrangement”. As we outlined in extensive detail here, there are a huge amount of differences which need to be resolved. The crucial ones being labour market and pension reforms, as well as debt relief. Chances of an agreement remain unclear, but we would expect Greece to struggle once again to get what it wants.

Finally, the Greek government has to return to Greece and sell what is almost an entire capitulation to its own MPs (some of whom would have rather left the Eurozone than abandon their aims), its coalition partner, and the public (which has strongly supported the hard-line stance). We got a taste of this in the presser, when Finance Minister Yanis Varoufakis said:

From the very first day, we refused to see these negotiations as a zero sum game.

We’re beginning to be co-authors of our destiny.

The Eurogroup statement is a good example of ‘constructive ambiguity’ on primary surplus targets.

Focusing on the longer term and selling the openness of the negotiation as an escape from the current programme. This may or may not be true, it is in the end a negotiation.

As we said yesterday,

Greece has folded this hand but the game of poker continues. Greece is now short stack and living hand to hand (day to day). It continues to be in a very tough position and how the evaporation of the vision which SYRIZA sold at the election is a crucial and potentially explosive unknown.

8 bln euros to line state coffers is to be paid out of taxpayers’ wallets
After agreeing to yield measures worth 8 bln euros, the government has set up a minefield of VAT increases. VAT increases to food items are particularly tricky with hidden details aimed at yielding 2 bln euros in 15 months!
Here are the government’s hidden tax shocks:
– 45% hike to VAT at Aegean islands
100 mln euros more for this year and another 300 mln euros for next year can be found by increasing VAT from 16.5% to 23% in the Aegean. The measure will be applied to upmarket Mykonos and Santorini with VAT staying the same at isolated islands. The right-wing, anti-austerity ANEL party refuses to sign this measure, however members of the Radical Left Coalition (SYRIZA) government are also reluctant to differentiate cosmopolitan from other islands.
– Doubling of VAT at hotels from 6.5% to 13%
A vacation package worth 500 euros will now cost an additional 30 euros.
– 23% VAT to food: Increases to thousands of products and services
Non-basic food items will be affected by this measure. An increase to the prices of processed food such as spaghetti, rice and packaged items will cause grocery bills to escalate. Biscuit, chocolates, chips, soft drinks will definitely be among the food items to note price hikes.
– VAT increases will also affect the prices at restaurants, public transport, taxis and air fairs, maintenance services and entertainment
Protothema