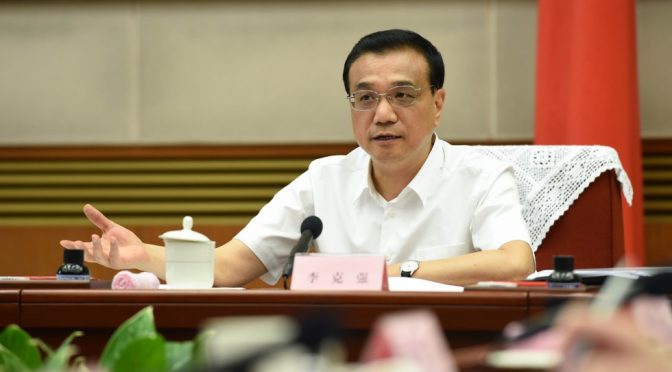 From China’s perspective, the Eurozone economy has collapsed simultaneously with the United States back in late 2008.
Since then, both sides of the Atlantic just kept kicking the can by cooking the books, fantastic economic speeches and by persistently banging the drums of war for increasing military budget to continue feeding the military industrial complex.

These Western regressive actions are deeply contrasted by the BRICS rapid establishment of its own global development banks, and its own version of the United Nations right in Shanghai, China.
Back in 2012, most of the CEOs of major banks worldwide had already seen the writings on the wall and decided to resign en masse. These massive resignations were highlighted by the World Bank President Zoellick’s own resignation and punctuated a year later the unprecedented resignation of Pope Benedict himself.
Those who can’t handle the new reality did take a dive from their ivory towers, followed by a spate of young bankers’ murders which included financial analysts, network administrator-programmers, and stock brokers, a clear indication of people cleaning up their tracks.
The politicians, however, being masters of image shifting and unquestionable loyalty to the noble cause known as self-preservation are more than happy to acknowledge and welcome the real power behind the true hard currency-based economic system, no it’s not the Rothschilds, but the Chinese Dragon Family, et al, into their political jurisdictions and accept the Family’s expression of goodwill.
Since the US government is not yet ready, China will have to start first with the more cooperative European community.

China to inject billions of dollars into EU fund

The Chinese government will inject billions of dollars into a much touted EU plan to invest 315 billion euros into the EU’s ailing economy, said a Reuters report on Sunday.
The new European Fund for Strategic Investment (EFSI) will finance infrastructure projects in areas such as broadband data connections, energy and transport, education, research and innovation.
The Chinese investment will be announced by China’s Premier Li Keqiang at the China-EU Summit in Brussels on 29 June.
Beijing’s plan to invest in the EU fund came after the decision of several European countries to join the China-led Asian Infrastructure Investment Bank (AIIB).
“China announced that it would make (X amount) available for co-financing strategic investment of common interest across the EU,” Reuters quotes the draft final statement.
The EU fund will “create opportunities for China to invest in the EU, in particular in infrastructure and innovation sectors” added the draft communiqué.
The proposed fund is stated to be the cornerstone of the European Commission’s agenda to jumpstart the EU’s moribund economy, which has failed to grow effectively since the Great Recession, is mired in mass unemployment and threatens to sink into deflation.
Meanwhile, more and more European countries are likely to follow Hungary’s lead in officially signing onto China’s ambitious Silk Road project, a multi-billion dollar program to build up infrastructure and trade along the land and maritime routes of the ancient Silk Road that stretched across Asia and Europe.
TBP

Chinese Premier Li Keqiang will attend the 17th China-EU leaders’ meeting later this month in Brussels, the first since the change of EU leadership.Li will, during the summit, announce plans to inject billions of dollars into a much-touted EU investment fund.
The new European Fund for Strategic Investment (EFSI) plans to invest 315 billion euros into the EU’s ailing economy.China’s Foreign Ministry spokesperson Lu Kang said on Tuesday that Beijing hoped “Greece will get out of the crisis soon”. Lu however refused to comment on whether China will send financial aid to debt-ridden Greece.At Greek port of Piraeus, Chinese shipping giant Cosco controls two of the three container terminals.
Greece is an important gateway for China into Europe.“From China’s standpoint, we hope Greece will get out of the crisis soon so as to enable the stable development of the EU integration process,” Lu said at a press briefing in Beijing.
As Greece struggles with EU and IMF debt, Prime Minister Alexis Tsipras has opened discussion channels with Russian and Chinese leaders.Tsipras was in Saint Petersburg for a Russian economic summit during which he lauded the BRICS bloc for their efforts in strengthening multilateralism in global affairs.
Tsipras described his country’s impasse with its European creditors ahead of a debt repayment deadline as “the center of a storm”
Meanwhile, Chinese Premier Li will pay official visits to Belgium and France from June 28 to July 2. He will also visit the headquarters of the Organization of Economic Cooperation and Development (OECD) in Paris.
The proposed EU fund, which will now receive Chinese aid, is stated to be the cornerstone of the European Commission’s agenda to jumpstart the EU’s moribund economy, which has failed to grow effectively since the Great Recession, is mired in mass unemployment and threatens to sink into deflation.
Meanwhile, more and more European countries are likely to follow Hungary’s lead in officially signing onto China’s ambitious Silk Road project, a multi-billion dollar program to build up infrastructure and trade along the land and maritime routes of the ancient Silk Road that stretched across Asia and Europe.
Greek Premier Alexis Tsipras, who spoke after Russian President Putin at a Russian economic forum on Friday, criticized the EU for believing that it “was the center of the world”. He also noted that “economic centers of the world are shifting”.
“The economic center of the planet has shifted. There are new emerging forces that are playing a more important role geopolitically and economically. International relations are more and more characterized by multi-polarity,” said Tsipras.
“Enhanced cooperation among the BRICS countries is another manifestation of the new world order at the moment,” he added.
TBP and Agencies
What is most striking about all of these progressive actions is the absence of the usual political fanfare from the side of the Chinese Dragon Family, as opposed to the exceptionalist’s mentality of the other side. We really have a lot to learn from the philosophy of Confucius.
One of the significant sources of funds for the fascist Nazionist Jesuit Khazarian Mafia is the healthcare industry which registered a whopping $3.09 trillion in 2014, and is projected to soar to $3.57 trillion in 2017, in the US alone.
We can help take down the Dark Cabal by avoiding drugs, defeat any viral attack and scaremongering easily by knowing how to build our own comprehensive antiviral system. Find more about it here.