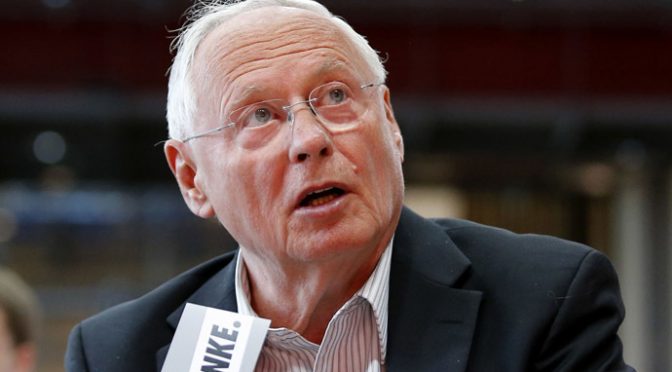 Yeah, that’s right. It’s because the Europeans are the worst hit by Russian counter-sanctions since the United States prodded the EU to exert pressure on its perceived enemy.

Compounding the worsening economic conditions in the Eurozone is the spate of industrial espionage by the NSA which also involved the willing participation of Chancellor Merkel herself, gravely undermining Germany’s industrial and geopolitical integrity.
All these deteriorating conditions are surprisingly not affecting the US directly. It’s been found that American companies are still engaging with the Russians, and are even enjoying highly profitable transactions with them.
Those who understand the real situation and recognize the real cause of the problem, can’t take it no more. One of them is the former finance minister of Germany, Oskar Lafontaine. He just lost all respect to the Obama administration and the entire US foreign policy.
Who aren’t these days?
So, all together now…

Left-wing German politician and former finance minister Oskar Lafontaine has some harsh language message for US on its politics concerning Russia and Ukraine. He has also called on the EU to oppose Washington.
In a Facebook post which cannot be quoted fully quote due to strong language, Lafontaine, whose latest political post was co-chairman of the democratic socialist party The Left, called US Defense Secretary Ashton Carter the “Secretary of War”, and Washington’s policies “imperialism.”

“The US Secretary of War calls on Europeans to confront the Russian ‘aggression’,” Lafontaine writes after a strongly-worded introduction. “The Europeans have every reason to oppose the US aggression.”
Ashton Carter has paid a visit to Tallinn, where he pledged a new batch of 250 tanks and armored vehicles to European nations near the Russian border. His counterparts from Estonia, Latvia and Lithuania were eager to accept the deployment, indicating they see it as a message to Russia over what they call its “aggression.”
Lafontaine then cites the “Grand Master of US diplomacy” George Kennan, who served as US ambassador to the Soviet Union in the 1950s and to Yugoslavia in the 1960s. Kennan “described the eastward expansion of NATO as the biggest mistake of the US foreign policy after the Second World War,” Lafontaine writes, “because they have resulted in a new Cold War.”
“The US diplomat Victoria Nuland said, we have spent more than five billion dollars to destabilize Ukraine,” Lafontaine’s Facebook post goes on, presumably referring to Nuland’s February 2014 statement that since 1991, Washington invested $5 billion in “democratic institutions” in Ukraine.
The EU recently agreed to extend economic sanctions against Russia for six more months. The introduction of those sanctions was highly encouraged by the US, but according to a recent study, they are hurting the EU more than initially expected, threatening some 2.5 million jobs.
READ MORE: Anti-Russian sanctions hurt Europe harder than expected, threaten 2.5mn jobs – study
Lafontaine also reminds readers of a leaked phone call where Nuland allegedly said “f**k the EU” to the US ambassador in Kiev, and concludes: “You continue to play with fire, and Europe has paid with revenue declines in trade with Russia and the loss of jobs … We need a European foreign policy that restrains the warmongering US imperialism!”
RT
One of the significant sources of funds for the fascist Nazionist Jesuit Khazarian Mafia is the healthcare industry which registered a whopping $3.09 trillion in 2014, and is projected to soar to $3.57 trillion in 2017, in the US alone.
We can help take down the Dark Cabal by avoiding drugs, defeat any viral attack and scaremongering easily by knowing how to build our own comprehensive antiviral system. Find more about it here.