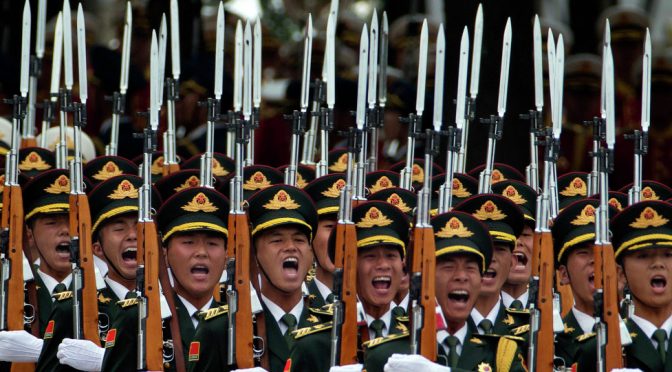 When the British were expanding its empire throughout Asia and the Pacific in the 18th-19th century, it did start the modernization of some of those territories, e.g. Hong Kong, Singapore, Malaysia, Australia and New Zealand.
But whether these nations benefited from such a dramatic change, or more for the British, is a matter of debate because there’s that primordial question of whether the people in these lands wanted those changes, to begin with.

As far as these populations were concern, they already have everything they needed, hence, the absence of a strong motivation to “modernize”.
But when the British reacquired the American colonies and use its military might to project its empire throughout the 20th century, there’s no doubt it marked the beginning of its own irrelevance especially when the people began to understand the sheer madness of it all.
The US is now in the process of being isolated, too, and has become a nation at war with itself. But one can only admire how China is proactively engaging them still and constructively, as equal, even though the latter has already surpassed the former due to the continuing positive growth of its economy for the last three  decades now, and in spite of the persistent US attack on China’s “human rights violations” when the latter was able to uplift the lives of 800 million out of abject poverty imposed by the Jesuits during the time of Mao when more than 30 million Buddhists had perished.
Can the US government claim that it has no problem with its human rights record, being the exceptionalist purveyor of democracy and freedom around the world?
Can the US government claim that it has improved the lives of its people?
Quite the contrary, the US, Inc. has one of the worst human rights violations around, especially in dealing with people of color.
But there’s no denying that China is ready and able, more than ever, to protect its own interest whilst extending its influence throughout the world by the wiser employment of its own brand of “soft power” everywhere she’s welcome.

Is China Building a Military Base in Djibouti?

22:59 25.06.2015(updated 04:25 26.06.2015)
As a fairly stable country positioned between Yemen and Somalia, Djibouti plays an important strategic role for the US. The country additionally overlooks the Bab al-Mandeb straits, one of the busiest shipping lanes in the world.
The US military’s headquarters in the region, Camp Lemonnier, is based in the country and is used for covert operations, including anti-terror, in Yemen, Somalia, and across Africa.
Djibouti’s port has been used by European and other navies, including China’s, to fight against piracy from neighboring Somalia. Japan and France also have military bases located there.
In an interview with AFP in May, President Ismail Omar Guelleh said that China is in negotiations with his country to set up a military base in the strategic port.
“France’s presence is old, and the Americans found that the position of Djibouti could help in the fight against terrorism in the region,” he said. “The Japanese want to protect themselves from piracy – and now the Chinese also want to protect their interests, and they are welcome.”
Beijing has become a key economic partner to Djibouti in recent years. In 2014, Guelleh switched a port operating contract to a Chinese company from a Dubai-based operator when the latter was accused of corruption.
When asked about the base at a monthly news briefing, Chinese Defense Ministry spokesman Yang Yujun declined to confirm, saying only that both countries have a friendly relationship and that both were interested in regional peace and security.
“Over the past few years both countries’ friendly cooperative relationship has kept on developing, and in all areas there is practical cooperation,” Yang said.
“What needs to be explained is, maintaining regional peace and stability accords with all countries’ interests, and it is the joint desire of China, Djibouti and all other countries in the world,” he added. “China is willing to, and ought to make even more contributions in this regard.”
The reports come as the United States raises concerns about an expanding Chinese “sphere of influence,” and as officials grow wary about the prospect of having US and Chinese bases side-by-side in Djibouti.
In May, ahead of Secretary of State John Kerry’s visit to Djibouti, a US congressman warned that Washington’s interests in Africa may be jeopardized by China’s “worrisome” and expanding presence there. Rep. Randy Forbes, the chairman of the seapower subcommittee of the House Armed Services Committee, also issued a statement on May 11 echoing similar concerns, saying “China’s determination for permanent bases far outside their traditional area of influence should remind Washington that Beijing sees itself as a global power.”
According to the BBC, China is looking to install its military base in Djibouti’s northern Obock region, which means it will overlook the US military installations there.  The base’s installation will also bring in $100 million, slightly more than the US’s annual $63 million.
Sputnik

Three Chinese-made submarines worth 355 million dollars each may be purchased by Thailand for its Royal Navy, the newspaper Bangkok Post reported on Friday, citing a source in the country’s procurement committee.
The decision was made on Thursday, when the majority of the 17-strong committee said “yes” to the Chinese submarines, saying that it was the “best value for money”. Other committee members remained split between offers from South Korea and Germany.
According to the source, the committee voted to buy the Chinese submarines because they are “equipped with superior weaponry and technology and are also able to stay underwater longer.”
In July 2014, the Royal Thai Navy inaugurated a state-of-the-art submarine squadron headquarters and training center for this squadron, even though the navy has had no submarines in its fleet since 1951.
The squadron’s facilities, which include a German submarine simulator, were established at an existing naval base in Sattahip, east of Bangkok in the Gulf of Thailand.
The submarine project has been repeatedly supported by Thai Deputy Prime Minister and Defense Minister Prawit Wongsuwon, who pointed to the country’s ever-increasing territorial challenges and maritime missions.
Earlier, the Thai government allocated almost 6 million dollars for the navy dealing with the feasibility of purchasing submarines from Germany, South Korea or China.
Sputnik

BEIJING, June 25 (Sputnik) – Western principles in assigning ideologically-driven credit ratings were the root cause of the 2008 global financial crisis, China’s Dagong Global Credit Rating Group said Thursday.
The 68-page study analyzes 104 Western rating methods across 70 sectors and nearly 2,400 rating indicators and opinions published by the three biggest rating agencies.
Its author, and the chairman of Dagong, argues that the failure on the part of Moody’s, Standard & Poor’s and Fitch to “indicate the essence of rating” results in Western ratings losing their value.
“Practices have proven the errors in the Western credit rating ideas and the global credit crisis has presented solid evidence,” Guan Jianzhong was quoted as saying at the conference.
Guan called for further study of Western credit rating principles to prevent “another world-sweeping credit squeeze.”
The three dominant rating agencies have often faced criticism for allowing their ratings to be tinged by geopolitics, which has led a number of non-Western institutions and officials to call for the establishment of independent agencies.
Sputnik

US Should Start Practicing the Human Rights Standards It Preaches 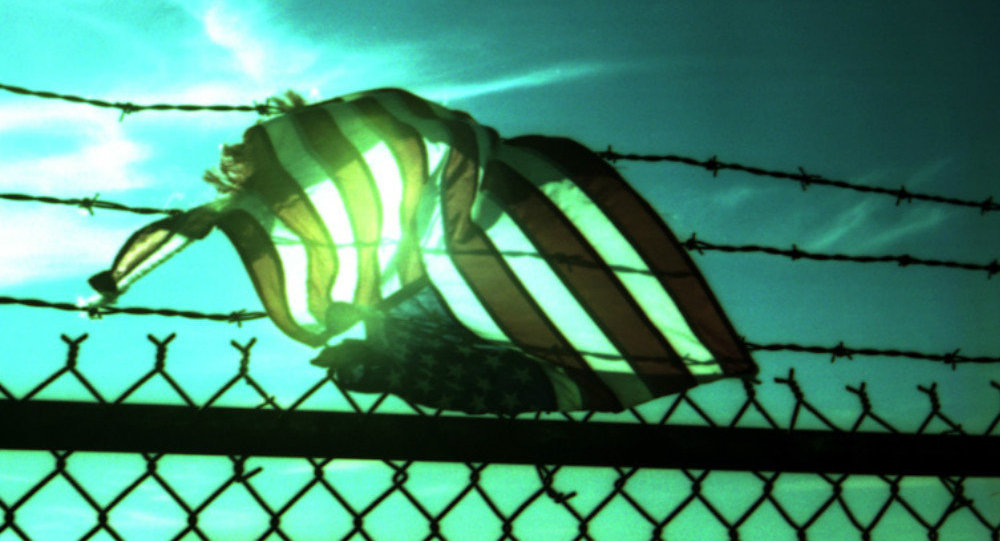 WASHINGTON (Sputnik) — Amnesty International is a global movement of people fighting injustice and promoting human right, according to the organization’s web site.
“We ask that the US government follows its own example and takes these findings to heart.” Amnesty International USA (AIUSA) Managing Director of Government Relations Adotei Akwei said in a statement issued on Thursday.
Earlier on Thursday, the State Department released its 2014 Country Reports on Human Rights Practices. The report is an annual survey of human rights violations throughout the world.
“These reports can be an invaluable roadmap for shaping US foreign policy,” the AIUSA official said, adding however, that many actions carried out by the US government failed to meet the standards they apply to others in the annual report.
Sputnik
In alliance with the BRICS, China is creating its own World Bank through the Asian Infrastructure Investments Bank, New Development Bank, Silk and Maritime Road Fund, and recently the EU Fund. She is also establishing her own global credit rating agency and is in the process of integrating three of its largest stock and gold exchanges.
There’s now a clearer understanding that China’s primary task is to take care of the global economy while Russia look out for the BRICS Alliance’s security. The rest of the globe is expected to realign their resources, including machineries of war, for peaceful purposes.
So, is China building an empire?
Yes, she does.
She is building a world founded on the principles of its genius, Kong Qiu, the philosopher popularly known as Confucius.
She wants a world of mutual respect and understanding; a world without wars and destructive caprices of the ego.
She’s building an Empire of Asian Love and Beauty.
[youtube https://www.youtube.com/watch?v=rC0w7-RWm_U?rel=0&controls=0&showinfo=0&w=560&h=315]
[youtube https://www.youtube.com/watch?v=2yvaPDaE95g?rel=0&controls=0&showinfo=0&w=560&h=315]

One thought on “Is China Building an Empire?”